2 The Point News » Guest Authors » Members Only » CAN ROSEANNE SAVE AMERICA?

CAN ROSEANNE SAVE AMERICA? 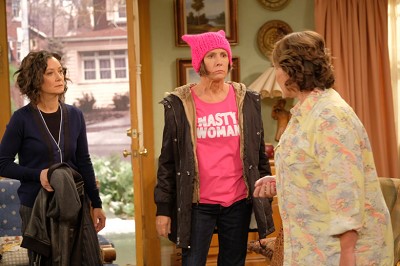 Ever since Donald Trump rode down his escalator and announced he was running for president, a good swath of America, not to mention the overwhelming majority of its media, has been having the collective equivalent of a nervous breakdown.

It got worse when he actually became president and it hasn’t stopped since.  The ramifications have been, to put it mildly, depressing  — families divided, longtime friendships shattered, the society even more sundered than it was during Vietnam.

This has largely been the Left’s doing, to be honest — they tend to react more emotionally — but some on the Right (“Never Trumpers”) are responsible too.

The woman whose sitcom with John Goodman broke ground thirty years ago as a symbol of working class progressivism returned, after a three-decade hiatus, Tuesday night, but this time — oh, apostasy! — as a Trump supporter in Roseanne.

Actually, Barr has been in the Trump camp on Twitter and elsewhere for some time, but this was her first venture into the theatrical realm.

Was it a great show?  It’s hard to say because the extraordinary shock of seeing an actual highly sympathetic though irascible self-admitted “Deplorable” — Roseanne — as the protagonist of a network television show is so far from our daily entertainment reality it overwhelms all other considerations.

Yes, there were a fair number of funny lines.  But forget writing, acting, directing, and the rest. It was positively thrilling to see something fictional transpiring on the television screen that reflected the half of America that has been so consistently and deliberately hidden from view or reviled by Hollywood.

You almost  couldn’t believe your eyes.  Was this actually happening?  When were Matt Damon or George Clooney going to walk in to set these people to rights?  It had to be coming after the commercial. But it didn’t.

The show reminded me of how much I liked the real “Deplorables” while covering the presidential campaign.  They were the furthest thing from the caricature promulgated by Obama, Hillary, and other elites, but kind and decent people with normal struggles as portrayed in this new Roseanne series.

Not that the producer-star doesn’t give the other side their innings.  Her sister Jackie, who comes back as a life coach in a “Nasty Woman” sweatshirt, has her moments and is usually shown sympathetically, if a little goofily, in the show.

But then, everyone’s a bit goofy — and that’s the point.  You’re struck by how long it’s been since people in our society have been able to talk to each other in something resembling a civil manner — and maybe even poke fun at their own foibles and opinions.  If only they could be like they are on the Roseanne show, quirks and all.

But can they?  Will a show like this instigate even a little genuine change  The Far Left is hopeless, but what about the Center Left?

Unfortunately, a New York Times interview with Roseanne by Patrick Healy is not encouraging.

[Healey] Trump has had tough words for ABC. Did you get any pushback from ABC about making Roseanne a Trump supporter?

[Roseanne] Not from ABC, no.

Everyone else in the world.

Why do you think?

You know, people only want to see — they want to stick to their narrative and they don’t want it shaken up. But, you know, I was like, ‘Oh, here we go. I’m just the person for this job.’

Considering that Trump opposes many of the principles that you and Roseanne Conner have stood for, how can you support him?

People like Patrick Healy have a vested interest in thinking of Trump as a racist-sexist-homophobe, because if he’s not, they might have to listen to or even deal with his actual policies.  And they have, as we have seen, not the slightest interest in that.  It’s far too threatening.

So Roseanne has a mighty hill to climb with her show.  And, if you read the rest of the interview, you might find remarks in it from her that displease you. Moments in the show may do the same.   But I advise caution.  Nothing’s perfect and nothing ever will be.

In the main she is doing a fantastic thing with this show.  We can only hope it is a huge success.  On its human values alone, it deserves our wholehearted support.