“BUT WE’LL CONTROL THE RUBBLE”

[ssba]Tirana, Albania.  Welcome to the most pro-American country in the world.  From groups of young college kids to now-elderly former political prisoners of Communist dictator Enver Hoxha, you won’t find a country that loves America more. 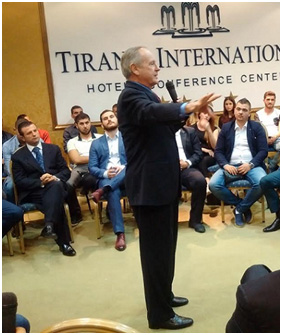 To Albanians, America is the world’s beacon of hope, the nation that epitomizes freedom from tyranny.  We Americans, under “the great Ronald Reagan,” are the people that won the Cold War, who liberated them and so many others from the curse of the Soviet Union.

Which is why they are puzzled and scared now that the man who represents America to Albania, Ambassador Donald Lu, is completely in bed with the criminal gang that currently runs the government of their country.

Yesterday (10/11), The Hill (the newspaper of record for Capitol Hill in Washington) ran a story detailing how Prime Minister Edi Rama and his Interior Minister Saimir Tahiri are in effect business partners with gangsters and ISIS terrorists who have turned Albania into Europe’s greatest drug haven.

There is no more rule of law in Albania today because Rama has used hundreds of millions of drug dollars to put police chiefs, customs inspectors, judges, and a myriad of politicians and other officials on his payroll.  And of course journalists, making the Albanian Enemedia his poodle.

Albanians are losing hope for their future.  The one hope they are clinging to right now is that Donald Trump will be our next president.  “He is a strong man, not a weak man like Obama,” I was told over and again.  “We do not trust Mrs. Clinton to be any different than Obama, while we are sure that Mr. Trump will be Obama’s opposite.”

Unspoken was their deepest fear – that a Hillary Presidency will be a criminally corrupt conspiracy that will end the rule of law in America as it has been ended in Albania.

And with the extinguishing of America as the world’s beacon of hope, what chance do the small powerless countries of the world have?

Indeed, what chance do we in America have?

This is why Republicans in Congress abandoning Trump for locker room talk 11 years ago is so monumentally cowardly and stupid it is they who should quit their races for elective office, not Trump.

At least one of their colleagues, Dana Rohrabacher (R-CA) had the moxie to denounce Paul Ryan by name as “cowardly” and his ilk as “gutless.”

This is a primary reason why Trump is the GOP candidate in a nutshell:  the spinelessness of Pubs to stand up to Dems and the Enemedia.  When Bill Clinton was accused of affairs or rape, the Dems rallied to him, defending him to the max.

What Bill Clinton did was so vastly worse than Trump’s vulgarities that it’s like – well, violently raping a woman to macho male talk in a locker room.  Yet instead of rallying to Trump, Paul Ryan and an entire scum of Pub Pols turn against him.

There’s just one little problem with this scenario.  It may not be that Ryan & Co are merely lily-livered yellow-bellied gonad-less eunuchs.

They could be much worse – bordering on treason worse.

There is a saying everyone in DC has heard — that when one group of politicians is accused of turning what they control into rubble, rather than lose their control to opponents, they reply, “Yes, but we’ll control the rubble.”

Thus the suspicion that the forgotten and archived 11 year-old NBC tape of Trump was leaked to the WaPo not by any Dem but by a member of the Pub Elite.  Here’s the headline:  GOP Elites May Have Leaked Trump Sex Talk Tape.

Which elites?  Could it be Paul Ryan’s closest advisor Dan Senor and his wife Campbell Brown?  Or Billy Bush himself (to whom Trump was talking in the tape), who is President George H. W. Bush’s nephew (his father is H.W.’s brother), and George and Jeb Bush’s first cousin.   And we all know how much the Bushes hate Trump – H.W. and wife Barbara are even voting for Hillary.

Those are the suspicions and accusations.  But why would the accused do such a thing?  It certainly can’t be simply ersatz personal distaste towards Trump.

No, it’s because Trump is an existential threat to them.  Forget Ryan’s everyman-for-himself plea to focus on House and Senate races in order to maintain Pub majority.  He’s not stupid.  He’s a political professional who well knows Ben Franklin’s admonition to hang together else everyone hangs separately.

Ryan and his ilk are not afraid of Trump losing.  They’re afraid of Trump winning.  What happens with Trump in the White House scything entire swaths of the Federal Register and the Tax Code?  Lobbyists en masse would decamp from K Street and head for state capitals.  No lobbyists, no campaign donations.

If Trump wins, the GOP Elites’ gravy train of perks and lobbyist donations is derailed.  Further, one of the first things Trump will do as president is demand a wholesale shakeup of the House and Senate Pub leadership.

What do you think the odds are in a Trump Administration of Paul Ryan retaining his Speakership or Mitch McConnell his Majority Leadership?  You’d need an electron microscope to see them.

The bottom line is this.  Majority status gets you the lion’s share of donations, the front row seat at the gravy train trough.  But minority status is a pretty good gig too with hordes of lobbyists wanting to make you happy as well.  Even with minority status, the Pub Elites’ gravy train will be diminished but not off the tracks.

That’s what may well be going on – especially in light of Ryan’s everyman-for-himself gambit on Monday (10/10) after Trump’s triumph in the second debate the night before.

Ryan and the GOP Congressional Elite want Trump to lose so they will remain in control of their party.  It may be a few millimeters short of treason, but they are putting themselves, sworn to uphold the Constitution and defend America, before their country – and that is the very antithesis of patriotism.

Patriots they are not, for all they care about is, “We’ll control the rubble.”