It was about two years ago when I was talking to my friend Tony Blankley of the Washington Times and Fox News, and commented that someday George Bush’s greatness as a president would be compared to Ronald Reagan’s. Tony’s response floored me: “You know, Jack, someday it might be the other way around.”

The trifecta of the last two weeks – the Second Inaugural Address, the elections in Iraq, the State of the Union – provide an undeniable demonstration of Tony’s prescience. Yet next December 10 in Oslo, Norway, there will be another undeniable demonstration – this one of undiluted perversity. For on that day, George W. Bush will not be there to be awarded the Nobel Peace Prize.

The nominations closed this week, on February 1st. Last year, a Norwegian Parliamentarian, Jan Simonsen, nominated President Bush for ridding the world of Saddam Hussein. How much more so should he be nominated now? I can assure you that GW is on the nomination list, along with Victor Yushchenko of Ukraine, Micael Sakashvilli of Georgia, exiled Bangladeshi writer Taslima Nasrin, and Rebiya Kadeer, a political prisoner in China for advocating freedom for her Uighur people of colonized East Turkestan.

Word is that Mrs. Kadeer has the inside track because she was recently awarded the Norwegian Rafto Prize for outstanding contributions to human rights, which is seen as a prelude to the Peace Prize itself (remember that the Norwegian Nobel Committee, consisting of five members, awards the Peace Prize, while the Swedish Nobel Committee awards the others). She would, in fact be an excellent choice.

The Moslems of East Turkestan form the most oppressed Islamic community in the world. East Turkestan is a colony of China, which calls it Xinjiang Province. As you can see: 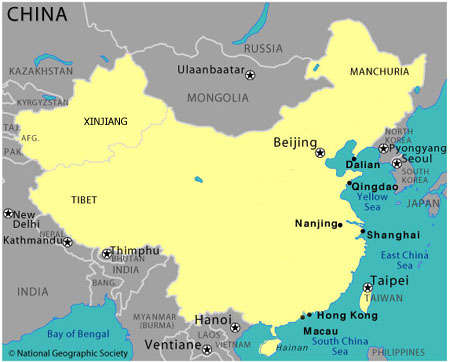 it borders the five “Stans” of the former Soviet Union (Kazakhstan, Kyrgyzstan, et al), collectively known as West Turkestan. Both East and West Turkestan are populated by folks who are not Chinese – they are Caucasian Turkic, with the main ethnic sub-group in East Turkestan being the Uighurs (wee-gers). The Uighurs look upon the Chinese as oppressors and imperialists, and want to be free of Chinese control as are their western neighbors.

Their inspirational leader is Rebiya Kadeer, now in the Chinese Gulag. She is Moslem as are virtually all Uighurs, yet she is a business, not religious role model – the single most successful businessperson in Xinjiang. Her being the Peace Laureate would focus the world’s attention on human rights in China, and the Moslem world’s attention on Chinese colonial oppression of their fellow Moslems.

Yet – the same hopes that Shirin Ebadi would do the same for Iran, when she won the Peace Prize in 2003, have amounted to zilch. Her name most likely draws a complete blank for you. The hard reality is that Rebiya Kadeer’s winning the Nobel Peace Prize would be a wonderful acknowledgement of her struggle, but it will do as little to bring freedom to East Turkestan as Shirin Ebadi’s has brought to Iran or Aung San Suu Kyi’s has brought to Burma.

There is only one individual among all humanity who has brought actual real freedom and democracy to tens of millions of people in our day, and who has both the capacity and determination to bring actual real freedom and democracy to tens and tens of millions more. It is, quite frankly, ludicrous to suggest that there is anyone on this planet more deserving of the Nobel Peace Prize than George W. Bush.

The Shias, guided by Ayatollah Ali Sistani, are going to make very sure Sunnis are included, not excluded, from the new government. The Sunnis, in turn, are going to start hunting down the terrorists amongst them and wiping them out. Why is revealed by the following AP story, reporting on an attack on Sunni pipeline guards near Kirkuk on February 2 that killed 12:

Relatives of the dead vowed revenge. “I lost three of my sons in this cowardly act, and I will not make a funeral of them until I reach the killers and kill them,” said Mohammed Abdullah Jubouri, 55.

There is no way the Zarqawi and Baathist terrorists can last long when men like Jubouri are after their blood.

GW made it crystal clear in the SOTU, as Condi has in numerous comments, that the con game Syria has played with us and the CIA is over. The Alawite tyranny of Bashar al-Asad will not be able to withstand the extraordinary pressure about to be placed upon it and is going to implode.

As Iraq stabilizes and Syria ‘s terrorist sanctuary is neutralized, all eyes will be on Iran. For the President of the United States to identify on global television Iran as “the world’s primary state sponsor of terror,” and to look directly into the camera and proclaim: “To the Iranian people, I say tonight: As you stand for your own liberty, America stands with you,” leaves little doubt that the days of Iran’s Mullacracy are numbered.

My friends at RegimeChangeIran believe that this signals a Bush-Rice strategy of unrelenting advocacy of human rights and the exposure of their denial in Iran. Yesï¿½ but it will be far, far more than that. Iran has already begun to swarm with small teams of CIA (together with British MI6 and Israeli Mossad), Delta Force and other SpecOps. US fighter jets violate Iranian air space constantly now, luring Tehran to turn on air defense radars so they can be “templated,” in order to develop in the words of one Pentagon official, “an electronic order of battle” to take out the nuclear facilities.

This is most likely PsyOps, screwing with the mullahs’ minds, for rather than air strikes, sabotage is the way to go. Watch for Iran’s nuclear facilities to start having a series of unfortunate “accidents.” Watch also for events leading up to this date: June 17, 2005. That’s when Iranian presidential elections are to be held. The same folks who assisted Urkaine’s Orange Revolution (see “Global Freedom and Drunk Coal Miners” from last week) will be directing efforts to foment “Triple U” (Uncontrollable Urban Unrest) during the election campaign in cities throughout Iran – not just Tehran.

GW and his team – Condi, Goss, and Rummy – will do it smoothly, only on occasion publicly, always seen to be “consulting” with their Euroweenie counterparts, but make no mistake: George Bush is determined to oust the Mullacracy and liberate Iran as he has done Iraq. A different set of methods and without a military invasion, but the same result nonetheless. And he is determined to do it quickly. I give the Mullahs 12 months or less.

You can give other Middle East autocracies a little longer – but the SOTU demand was clear to them as well: the time for democracy in Egypt and Saudi Arabia has come. Given all of this, what more could the Norwegian Nobel Committee want?

In 2002, the Committee gave its award to Jimmy Carter, not for anything he did for “peace” but as a consciously-directed insult to George Bush. Its members could redeem themselves for this act of world-class pettiness in 2005. They won’t. Envy trumps all other human emotions. No matter how much he deserves to be, George Bush won’t be in Norway next December. But by next December, the world will be a freer and more peaceful place thanks to him.

[Note: for information on democracy movements in East Turkestan, Syria, Iran, and elsewhere, click on Liberation Links in To The Point’s left side bar.]