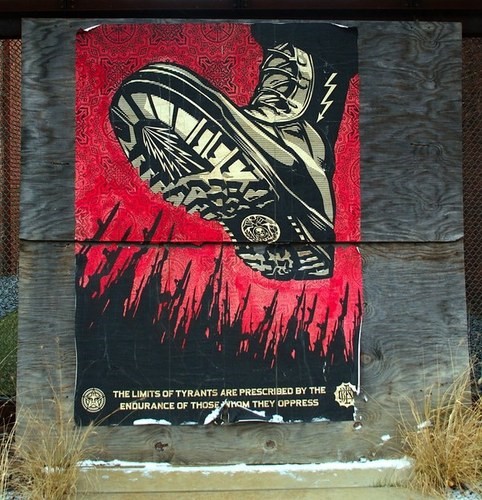 Albert Camus was fond of observing: “The welfare of the people in particular has always been the alibi of tyrants.”

The COVID-19 pandemic has thus served one particular purpose: it has demonstrated for all to see how much the Left bends toward authoritarianism – aka fascism – while the Right fights for freedom.

From the moment Drs. Fauci and Birx (known to wags as “Midget and Scarf”) presented the president with Neil Ferguson’s grossly overly alarmist computer model predicting mass death, leading them to advocate for a total shutdown of the economy, the Left’s natural inclination to ruthless subjugation reared its ugly head.

Very quickly, those with a heretofore modicum of power puffed themselves up like howler monkeys and started barking orders at their perceived subjects.

The Napoleonic Dr. Fauci is the first person that comes to mind when considering all those who have assumed power far beyond their realm.

Yes, he has long been a government apparatchik, the go-to immunologist since 1984 during the AIDS epidemic.  He got a lot wrong then, as he has gotten a lot wrong throughout the COVID-19 event.  A long-time leftist and fawning fan of Hillary Clinton, he has leapt to the top of the heap of those the media worship as the fount of all COVID-19 knowledge.

The media never challenges him, never brings up all the things he has had to revisit.  “The flu is not serious,” “it is serious”; “masks are not necessary,” “masks are necessary”; and now we cannot open up the states until there is a vaccine.  To this day, there is no vaccine for AIDS.

This man has very likely not been a physician in a hospital or seen a patient in decades.  He looks at data no matter how flawed and dictates his recommendations based on computer algorithms, and the media hang on his every word as if uttered from Mt. Sinai, which is why we are where we are today.

If Trump were to take issue with Fauci, the media would suffer a mass meltdown.

So here we are, eight weeks into a national shutdown, and our petty tyrants with swelling chests are all over the place, particularly in the blue states.  It is elected Democrats, from governors to the mayors of small towns, who are giving orders like the drill sergeants they are at heart.

New York’s Cuomo is perhaps the worst because his orders sent thousands of elderly patients to their deaths when he ordered those sick with the virus into nursing homes.

Then there is the clownish governor of Michigan, Gretchen Whitmer, who has taken what she views as her absolute power to ordain which businesses can stay open and what people may purchase.

Marijuana, alcohol, lottery tickets are allowed; plants, paint, baby gear are not.  Big box stores in Michigan have had to close off forbidden items with police tape.  Citizens of Michigan cannot drive to their summer homes or visit friends.  They can row a boat but not ride in one with a motor.

Equally controlling are the governor of Illinois, Pritzker, and Chicago mayor Lori Lightfoot.  They are both wallowing in their newfound power over their constituents.

Pritzker has banned all travel, but not for his own family.  He has decreed that churches cannot open for a year.  Churches to the Left are like crosses to a vampire.  Lightfoot closed all hair salons but went to her own.  Both defended their breaking their own decrees because, well, they are special.

Then there is California, which has for the most part avoided the mass death that N.Y. has endured.  Gov. Gavin “Gruesome” Newsom has had it pretty easy, but that has not kept him from issuing all sorts of arbitrary closures, like beaches.

He has ordered cheat-by-mail voting, and of course the closure of all non-essential businesses.  Like the rest of these petty tyrants, they have shuttered the businesses of those who most need to work, those who need a weekly income.

This crowd of overseers does not lose a dime of income or a wink of sleep while ordering those for whom business is absolutely essential to sit at home — like that judge in Dallas who sat up high on his bench and called salon-owner Shelly Luther selfish and demanded she apologize for opening her place of business.

As you learned in last Friday’s HFR, she told him she needed to feed her kids and that she would not apologize for that.  He fined her $7K and sentenced her to seven days in jail.  This so enraged the people most affected by this brand of leftist indifference to her plight that her GoFundMe page raised over $500K.

One would think that might be a wake-up call to theses big kahunas, but no — they double down.

Tom Wolf, Governor of Pennsylvania, ordered “all but life-sustaining businesses” to be shuttered.  As numerous business and some local mayors have rebelled, he has threatened them with withholding of funds and/or loss of business licenses. This is the man who said, when Tucker Carlson asked him if he had considered the Bill of Rights when shutting down his state, replied that the Bill of Rights was “above his pay grade.”

That is how you recognize tyrants – they never consider the Constitution, for they intend to render it meaningless.

Then there is Gov. Phil Murphy of New Jersey. He has banned all social gatherings and all what-he-deems-non-essential businesses. NJ was a hot spot for the virus but Murphy’s tack has been to instill fear and panic; “folks have go to be jolted” he told Martha Radditz.

The new Gov. of Kentucky Any Beshear revealed himself to be a tyrant of the anti-religious kind. He’s the one who promised that if churchgoers attended an Easter service in their cars, their license plates would be collected and they would be fined. A Trump-appointed judge, Justin Walker, put a stop to that nonsense.

Janet Mills, Gov. of Maine has been extremely hard on her citizens, shuttering all businesses and threatening those who defy her with loss of licenses. As of now, Maine had counted 1,477 cases and sixty-five deaths in a state of 1.3m people!

Meanwhile, the media have gone hard after any red state governor who has not imposed strict enough, to their minds, rules to be followed or else. Nearly all of the mainstream media experiences malevolent joy at the misfortune, the loss of thirty million jobs, the working people of America are suffering.

Who is the very worst of the worst? That would be Nancy Antoinette Pelosi of fancy ice cream infamy.

This is the person who most clearly defines the left today. Arrogant, elitist, thoroughly out of touch with working people, she is a 2020 version of Marie Antoinette and Lady Macbeth – corrupt and unscrupulous to her very core.

She has offered up an additional spending bill, this time $3t – entitled the “Heroes Bill of 2020” if you can believe it – that is ludicrous, full of far left nonsense having little whatever to do with the consequences of the virus or the shutdown. It does provide billions for illegal immigrants, however.

This monstrosity is her version of “never let a crisis go to waste.” The US is already at least $25t in debt. To borrow this much more would make us a “vassal of China” (Mark Levin) in perpetuity. Like the rest of her set, they truly do mean to destroy America and use the impoverishment of middle classes they so abhor to do it.

Pandemics like this one, maybe less serious, perhaps more serious, will come and go as they have for millennia. If this current pandemic has done anything valuable, it is to expose the predilection for totalitarianism that is the soul of the American left for all to see and experience.

Even our socialist-indoctrinated millennials do not like their beaches closed and their bars and restaurants put out of business. All those people who finally found jobs once Trump became president are not likely to look upon their jailers with fondness. These Blue State Commies may find themselves voted out by the very people they have long taken for granted.

Meanwhile, those who have bought into the panic and fear, those isolating themselves in their homes while their immune systems weaken, will suffer the most, physically and mentally.

Drug overdoses are sure to rise, as are deaths by lack of medical attention, cancer screenings and necessary elective surgeries, and of course suicides. This is what our tyrannous left hath wrought.

The American people are not likely to stand for the abrogation of their natural and constitutional rights to self-preservation, independence and economic pursuits much longer. Viruses come and go but the American spirit will prevail. Petty tyrants be damned.