2 The Point News » Behind The Lines » Members Only » AMERICAN RECONQUISTA 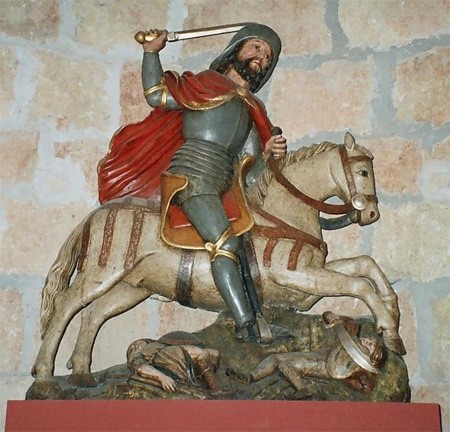 In 711 AD, a Moslem army crossed the Straits of Gibraltar to conquer all of Christian Spain.  It took 750 years to kick them out.

The story is told of the Christian Reconquest of Spain – and of Spain’s patron saint Santiago Matamoros, meaning Saint James the Moslem-Killer (those are Moslem soldiers under his horse’s feet above) – in Reconquista (TTP, August 2009).[i]

Now, in a correlation of historical ironies, we are about to embark on an American Reconquista of our own.  Actually, three of them simultaneously, all deeply interrelated.

History, however, moves far faster today than in the Middle Ages.  Our Reconquista will not take centuries.  Indeed, victory over all three could well be before the end of the Trump Presidency in 2024.

Let’s start with the most immediate.  Two days ago on July 1st, Mexico declared war upon the United States.

Rather than repeat myself over and over, to grasp what’s happened fully I’m asking that you read a series of TTP explanatory articles.

The first is from 15 years ago, July 2003:  America’s Curse.  That’s where I first stated that the greatest foreign threat to America’s national security, more dangerous than Iran or North Korea or China, is Mexico.

To go deeper, a companion piece written that same month is:  Traitors to Themselves: The Civil War Inside Mexico’s Soul.  A fuller explanation is provided in The Epilogue of The Jade Steps regarding Mexico’s intellectual history.

Then there is the crux article, from April 2004: Mexico As Takfiristan.

It references a March 2004 article in the Wall Street Journal: A New Breed of Islamic Warrior Is Emerging: Takfiris, Who Use Immigration as a Weapon:

“A new breed of Islamic holy warrior is emerging, unfettered by many of the religious and ideological constraints that defined Islamic terrorism in the past.

These Islamist warriors — schooled in the North African doctrine known as Takfir wal Hijra and trained by Afghan veterans of al Qaeda — think, recruit and operate differently from traditional Islamist networks. For Europe, that makes the threat particularly acute. The Takfir movement is strongest in Morocco and Algeria, the primary sources of Muslim immigration to Western Europe. Takfiri theorists openly advocate using immigration as a Trojan horse to expand jihad, or holy war.

Immigration is a key way to extend the radical ideas into Western Europe. One Takfiri scholar, Abu Basir, wrote in 2001 that ‘jihad and immigration go together…the one cannot be achieved without the other’.”

My Mexico As Takifiristan makes the connection:

Every single day now, three to four thousand illegal immigrants from Mexico flood across our border. It is an invasion. It is an invasion purposefully conducted by the government of Mexico as an act of war upon the United States.

Mexico has become Takfiristan. So far, the strategy of Mexican Takfiris has been confined to the Immigration Trojan Horse. If this strategy remains unchecked, there will come a day when the strategy will be accelerated with violence and terrorism.

All Americans need to clearly understand: The Mexican Government and Power Elite intend to physically break apart the United States, and they are well on their way to achieving their goal.

No false modesty – how prescient can you get?  This is why Turkish Dictator Recep Erdogan and Andres Obrador are blood brothers.

Erdogan’s life dream is to complete the ultimate goal of the Ottoman Empire, to conquer Christian Europe for Islam.  AMLO’s life dream is to destroy America out of revenge.  Both use the same weapon of illicit immigration as their chief weapon.

The Marxist intellectual elite that runs Mexico has always had this dream – AMLO is that dream’s apotheosis.  Trump’s America is the Foreign Devil against whom he will whip up Mexican hysteria – and especially among illegal aliens in the US.

Never forget that there are millions of Mexican-Americans who are American as anyone else, who are proud to be legal American citizens.

They will now be targeted like never before to either join the Destroy America movement to demand the return of the entire Southwest US “stolen” from Mexico, or be demonized as Malinchista traitors.

This is the “Aztlan” Movement discussed in Mexican Nazis from May 2005.  Let’s be clear.  AMLO is a Mexican Nazi waging outright war upon our country – and he has an army of Mexican Nazis already here inside our borders.

It is not going to be an easy war to win.  It will be an American Reconquista within our own country, to recapture it from foreign invaders.

One key is that advocated in Radio Free Mexico from April 2006:

“You’ve got to shut the border down regarding the illegal flood.  You’ve got to disallow illegals (and, yes, their children) from access to government benefits.

There are many other things you can do to defend America from this invasion – but, the crucial but for Ronald Reagan, would be we can’t just play defense. We’ve got to go on the offense.

Which means an offense against Mexico.  Not with guns and soldiers, but with ideas and information.  “To explain the truth and go on an ideological offensive against the Soviet Union,” Reagan would say, “we had Radio Free Europe beamed to the Soviet colonies of Eastern Europe, and Radio Liberty beamed to people within the Soviet Union itself.”

“So, obviously,” Reagan would conclude, “now you need a Radio Free Mexico beamed to the people of Mexico for the purpose of liberating them from the socialism, poverty, and corruption in their country that drives them to leave it”.”

Another key is for the Trump Administration to join forces with his anti-illegal immigration allies emerging in Europe, like Hungary’s Viktor Orban, Italy’s Matteo Salvini, Austria’s Sebastian Kurz and several others.  They are determined to stanch the illegal flood into their lands, just as we must be to stanch ours.

So part of our Reconquista must be to aid and support the emerging European Reconquista by European patriots.  In turn, they will support ours.

The third interlocking American Reconquista is of course recapturing our culture and country from the clutches of the Hate America Left.

We’re making headway with an America First President.  The next steps must be the nomination of a pro-life Constitutionalist for the Supreme Court – Amy Coney Barrett – to bulldoze her confirmation in the Senate, then have a Red Wave in November.

That will set up a shattering of the Democrats and the entire Left.  With them however momentarily immobilized, we can then launch not a march but a blitzkrieg through the institutions – from academia to Hollywood to the media to social networks to the whole Deep State.