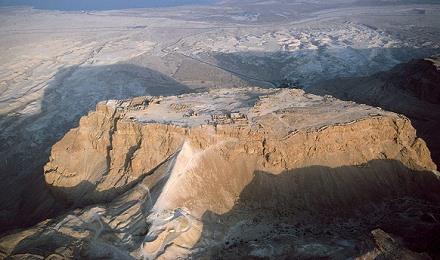 Masada, Israel. The story of Masada makes for epic history.

Built as an impregnable fortress sanctuary by Herod I (74 BC-4 AD) in the Judean Desert overlooking the Dead Sea, the Romans continued to maintain it after Herod’s death, albeit lightly defended.

In 66 AD, the Jews rebelled against the insufferable tyranny of Rome, known to historians as The Great Revolt.  A group of Jewish rebels were able to sneak into Masada and seize it.  They were ignored as the Romans focused on Jerusalem, proceeding to sack and destroy the city and the Second Temple built by Herod in 70 AD.

The defeat of the Jewish rebels initiated the Jewish Diaspora, completed by the Romans after subsequent Jewish revolts in the early 2nd century.  Meanwhile, the rebels holding the fortress at Masada had to be dealt with.  Almost 1,000 “rebels” and their families were there and refused to surrender.

Over 15,000 Roman soldiers and their slaves proceeded to build a siege ramp up the west side of  Masada – you can see the remnants in white in the photo above – to breach the defenses.  What the Romans found as they gained the heights was “a citadel of death” – of the 967 Jewish rebels at Masada, 960 had committed suicide.  Only two women and five children were found alive hiding in a cistern.

The night before, the rebels’ commander, Eleazar ben Ya’ir, assembled everyone to discuss the consequences of surrender to the Romans.  The women would be raped repeatedly then enslaved to a life of continual rape, while the men would be killed or suffer brutal enslavement.  It was the fate of the children to grow up as abused slaves.

They chose to die at their own hands rather than suffer this fate.  Two women and their children chose not to, whereupon Eleazar gave them this message to the Romans:

“Since we long ago resolved never to be servants to the Romans, nor to any other than to God Himself, Who alone is the true and just Lord of mankind, the time is now come that obliges us to make that resolution true in practice … We were the very first that revolted, and we are the last to fight against them; and I cannot but esteem it as a favor that God has granted us, that it is still in our power to die bravely, and in a state of freedom.”

Reminds you of Patrick Henry’s immortal words, doesn’t it:  “Give me liberty or give me death!”

Now for the historical irony.

There is one and one only source of our knowledge of what happened at Massada – and that is the book written by the Jewish-Roman historian Josephus (37-100 AD), entitled The Judean Revolt.  Josephus interviewed the actual Roman commanders of the Masada assault, who gave him their eye-witness account, including the quote of Eleazar from the captured women.

However, there is only and only one reason history has any memory of this – because of the other book Josephus wrote, Antiquities of the Jews.

It was a history of the Jewish people, written in Greek for cosmopolitan Romans.  In it, Josephus provides the only independent secular reference to the existence of Jesus Christ.  As such, Josephus became of immense importance to the Catholic Church which kept the book of Josephus reverently alive through the centuries – with Masada an ignored footnote.

That all changed with the Nazi Holocaust of World War II and the subsequent creation of Israel in 1948.  The founders of Israel were determined to create a paradigm shift in how Jews looked upon themselves.

For centuries they had passively accepted their fate of being murderously discriminated against.  Now they had to see themselves as warriors willing to fight or die for their freedom.  The epic heroism of Masada provided the perfect historical basis for such a paradigm shift, with every Israeli schoolchild imbued with it from kindergarten on.

No more pogroms, no more Jews lying down and taking it.  Like the heroes of Masada, Jews were now to be feared and respected for their absolute determination to defend themselves against evil and ruthless enemies.

It’s a lesson America has to learn and take to heart today.

Today, America is under assault from evil and ruthless enemies – who are tragically not external but internally within it.

Every day now this becomes more clear and the mortal danger creeps ever closer.  The enemy is obvious – the Deep State of unelected federal bureaucracies partnered with the Democrat Party, with the Fascist Media – now including Facebook, Twitter and other social networks – for propaganda control.

The danger is obvious:  This is an overt attempt to overthrow a duly elected President and government of the United States.

The enemy now has a specific face – Robert Mueller, their henchman hired to put the hit on President Trump.

Let’s be very clear:  Robert Mueller and his accomplices are willfully committing treason against the United States of America.

So – are we Americans going to take this lying down, accepting our fate to be enslaved by the Fascists of the Left?  Or are we going to fight or die?  We’ve got the guns. There are more of us than them. When are we going to put the fear of God into Robert Mueller?  Into Chuck Schumer, Mark Zukerberg, the owners of CNN and the New York Times?

We are fast reaching a Masada moment, where we have to choose between enslavement or freedom.  We don’t have to kill ourselves.  But we sure as Hell have to take serious risks in fighting for our freedom.

We have to come face to face with the reality that we are up against an evil enemy just as determined to destroy our freedom as the Soviets or the Nazis.

Face to face with the reality that if we let a horribly corrupt traitorous man like Robert Mueller and all those behind him destroy the Trump Presidency, then we are asking – begging – for the Fascist Left to put their handcuffs around our wrists.

What happened here at Masada has inspired the people of Israel to stand up and fight for their survival against hideously evil enemies.

The enemies of America are just as hideous.  Where will we find the inspiration to fight for our country’s survival against them?