A SAUDI PEACE PLAN THAT COULD ACTUALLY WORK 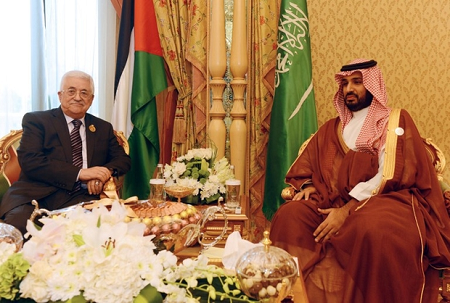 Saudi Crown Prince MBS bin Salman (known as MBS) reportedly presented it to PLO chief and Palestinian Authority chairman Mahmoud Abbas last month.  According to the Times’ report, MBS told Abbas he has two months to either accept the Saudi proposal or leave office to make way for a new Palestinian leader who will accept it.

The Palestinians and their European supporters are up in arms about the content of MBS’s plan. It reportedly proposes the establishment of limited Palestinian sovereignty over small portions of Judea and Samaria.

The Gaza Strip, over which the Palestinians have had full sovereignty since Israel pulled its military forces and civilians out in 2005, would be expanded into the northern Sinai, thus providing economic and territorial viability to the envisioned Palestinian state.

While the Palestinians would not receive sovereignty over Jerusalem, they would be able to establish their capital in the Jerusalem suburb of Abu Dis.

There are several aspects of the alleged Saudi peace plan that are notable. First, the Palestinians and their many allies insist that it is a nonstarter. No Palestinian leader could ever accept the offer and survive in power, they told the Times. The same Palestinian leaders from Hamas and Fatah, and their allies, also noted that the Saudi plan as reported strongly resembles past Israeli proposals.

Another aspect of the report that is notable is that the Saudis did not acknowledge that MBS presented the plan to Abbas.

Unlike the situation in 2002 when Times columnist Thomas Friedman presented what he claimed was then Saudi king Abdullah’s peace plan, the Saudi regime has not admitted that the characterization of their peace plan by the Times reflects their thinking.

It makes sense that the Palestinians and their Lebanese and European allies are upset at the alleged contents of the new Saudi plan. It is also reasonable that the Saudis are not willing today to publicly present the plan laid out in the Times.

The fact is that the alleged Saudi peace plan represents a radical break with the all the peace plans presented by the Arabs, the Europeans and the US for the past 40 years.

The purported Saudi plan is the first peace plan that foresees two viable states living in peace. All the other plans were based on transforming Israel into a non-viable state with a non-viable Palestinian state in its heartland.

While the Times report cites Western sources claiming that Egypt has rejected the prospect of merging Gaza with the northern Sinai under Palestinian sovereignty, there is no reason to assume that the option is dead. To the contrary, in the aftermath of last week’s massacre of 305 Sufi Muslim worshipers in a mosque in the northern Sinai, it is arguably more relevant now than at any previous time.

The mosque massacre makes clear that the Egyptian regime is incapable of defeating the Islamic State (ISIS) insurgency in Sinai on its own.

Egypt’s incapacity is as much a function of economic priorities as military capabilities. With Egypt constantly on the brink of economic collapse and in need of constant support from the World Bank, the US and the Gulf States, it is hard to make the argument for preferring economic investment in Sinai to economic investment west of the Suez Canal.

And in the absence of significant economic support for developing the Sinai, it is hard to see an end to the ISIS insurgency.

If the Europeans, Americans and Arab League member states chose to develop the northern Sinai for a Palestinian state with half the enthusiasm they have devoted to building a non-viable Palestinian state in Jerusalem and Judea and Samaria that would render Israel indefensible and enfeebled, the Palestinians would have a viable, developed state in short order.

And the Egyptians in turn would have the international support they need both economically and militarily to defeat ISIS completely and to rebuild their national economy.

Indeed, as advocates of the plan note, by yielding control over the northern Sinai to the Palestinians, and so enabling a viable Palestinian state to form, Egypt would become again the indisputable leader of the Arab world. With the good will of the Europeans and Americans, Sisi would secure Egypt’s position indefinitely.

This then brings us to the third notable aspect of the purported Saudi plan.

The backlash against the plan, like the backlash against MBS, has been furious. Abbas has reportedly been calling every international leader he can think of to oppose the deal. The Europeans reportedly also oppose it. French President Emmanuel Macron’s adviser reportedly contacted the Americans to make clear that the French are not on board with the proposal.

And whereas the opposition to MBS’s purported proposal has been largely behind the scenes, since MBS did not make it public, the Palestinians and their international supporters have been grabbing every available microphone to condemn US President Donald Trump’s recognition of Jerusalem as Israel’s capital and begin taking concrete steps to move the US embassy to Jerusalem.

With or without a public announcement of his alleged peace plan, MBS has become a hated figure in wide circles of the foreign policy establishment in the West due to his trenchant opposition to Iran’s rise as a hegemonic power in the region. The Times portrayed him as a serial bungler in its article about his alleged peace plan.

Yes, surprise, the voices leading the charge against MBS are the same ones that developed the media echo chamber in pursuit of then president Barack Obama’s nuclear deal with Iran.

The onslaught against MBS has been described as “an information campaign designed to protect the pro-Iran policies of the Obama administration.”

Trump’s visits to Israel and Saudi Arabia in May made clear that renewing US alliances with Saudi Arabia and Israel, and using them as a means to scale back Iranian power in the region, is in fact the central plank of his Middle East policy. Trump’s subsequent moves in support of MBS and Israel have reinforced this conclusion.

And so the backlash against MBS by the likes of former US ambassador to Israel Dan Shapiro and Robert Malley, Obama’s former adviser for the Middle East on his national security council makes sense. If they can discredit him, and pretend that an Iranian-controlled Lebanon and Syria are better than the alternatives, then they can force Trump to maintain faith with Obama’s policies.

People who oppose it have to explain why they insist on remaining faithful to a peace paradigm that has brought only war and instability.

Why do they prefer to retain Abbas’s authoritarian regime over a non-sovereign kleptocracy in Judea and Samaria with a Hamas terrorist state in Gaza to an alternative without either? Why doesn’t Abbas support it if his chief aspiration is the establishment of a viable Palestinian state and actually wants peace with Israel?

The New York Times article may or may not be an accurate portrayal of a real plan presented by the actual crown prince of Saudi Arabia. But if it isn’t his plan, it should be. Or it should be Trump’s plan.

Because it is the first peace plan anyone has ever put forward that makes sense. Not only does it secure the future of both Israel and the Palestinians, it enables Arab states like Saudi Arabia to work openly with Israel to defeat their joint Iranian enemy, while ensuring that Israel can survive and remain a credible ally to its Arab neighbors for decades to come.

Caroline Glick is Senior Contributing Editor of The Jerusalem Post.