A REVOLUTION OF HOAXES AND LIES 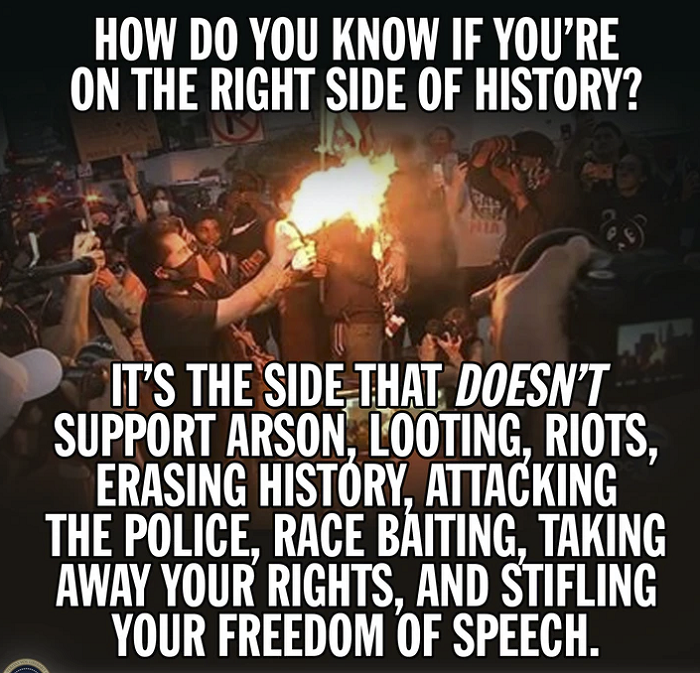 The current revolution is based on a series of hoaxes, lies, misrepresentations, and distortions, whose weight will soon sink it.

Unfortunately few in authority have been more wrong, and yet more self-righteously wrong, than the esteemed Dr. Anthony Fauci.

Given his long service as the director of the National Institute of Allergy and Infectious Diseases and his stature during the AIDS crisis, he has  been held up by the media as the gold standard of coronavirus information.

The media has constructed Fauci as a constant corrective of Trump’s supposed “lies” about the utility of travel bans, analogies with a bad flu year, and logical endorsement of hydroxychloroquine as a “what do you have to lose” possible therapy.

But the omnipresent Fauci himself unfortunately has now lost credibility. The reason is that he has offered authoritative advice about facts, which either were not known or could not have been known at the time of his declarations.

Since January, Fauci has variously advised the nation both that the coronavirus probably was unlikely to cause a major health crisis in the United States and later that it might yet kill 240,000 Americans.

In January, he praised China for its transparent handling of the coronavirus epidemic, not much later he conceded that perhaps they’d done a poor job of that.

He has cautioned that the virus both poses low risks and, later, high risks, for Americans. Wearing masks, Fauci warned, was both of little utility and yet, later, essential. Hydroxychloroquine, he huffed, had little utility; when studies showed that it did, he still has kept mostly silent.

At various times, he emphasized that social distancing and avoiding optional activities were mandatory, but earlier that blind dating and going on cruise ships were permissible.

Fauci weighed in on the inadvisability of restarting businesses prematurely, but he has displayed less certainty about the millions of demonstrators and rioters in the streets for a month violating quarantines.

The point is not that he is human like all of us, but that in each of these cases he asserted such contradictions with near-divine certainty—and further confused the public in extremis.

In terms of how the United States “fared,” it is simply untrue that Europe embraced superior social policies in containing the virus. The only somewhat reliable assessments of viral lethality are population numbers and deaths by COVID-19, although the latter is often in dispute.

By such rubrics, the United States, so far, has fared better than most of the major European countries—France, Italy, the United Kingdom, Spain, Sweden, and Belgium—in terms of deaths per million. Germany is the one major exception.

But if blame is to be allotted to public officials for the United States having a higher fatality rate than Germany, then the cause is most likely Democrat governors of high-death, Eastern Seaboard states—New York, New Jersey, Massachusetts (okay, Gov’s a Rino), and Connecticut in particular.

They either sent the infected into rest homes, or did not early on ensure that their mass transit systems were sanitized daily as well as practicing social distancing.

New York Governor Andrew Cuomo, more than any other regional or national leader, is culpable for decisions that doomed thousands of elderly patients. He did not just suggest long-term-care facilities receive active COVID-19 patients, but ordered them to take them—knowing at the time that the disease in its lethal manifestations targeted the elderly, infirm, and bedridden.

Then in shameful fashion, after thousands died, Cuomo claimed that either the facilities themselves or Donald Trump were responsible for the deaths.

In truth, in the United States, the coronavirus is largely a fatal disease in two senses: the vulnerable in just four states on the Eastern Seaboard that account for about 12 percent of the nation’s population but close to half of its total COVID-19 fatalities, and/or patients in rest homes or those over 65 years old with comorbidities.

Why are there currently spikes in cases among young people in warmer states and those of less population density in late June? The likely reason is that millions of protestors for nearly a month crammed the nation’s cities, suburbs, and towns, shouting and screaming without masks, violating social distancing, and often without observant hand washing and sanitizing—most often with official exemption or media and political approval.

Perhaps, but the real cost of four weeks of protesting, rioting, and looting was to undermine the authority of state officials to enforce blatant violations of the quarantine. Obviously, if some can march with impunity in phalanxes of screaming, shoulder-to-shoulder protestors, while others are jailed as individuals trying to restart a business, then the state has lost its credibility with people and they will simply ignore further edicts as they see fit.

Now what adjudicates quarantines are the people’s own calibrations of their own safety.

Mismanagement of the virus? There have been four disastrous official policy decisions:

*Retroactively attempting to reissue quarantine standards that their advocates and authors had themselves earlier de facto destroyed;

Black Lives Matter, Antifa, and other revolutionary groups hijacked the tragic death of George Floyd. Within hours they created a mythology of rampant white police lethal attacks on innocent black victims. But that trope, too, was without a factual basis.

In rare interracial violence, blacks are five times more likely to attack whites than vice versa. There is a tragic war against young, black males—over 7,000 murdered per year—but it is an urban genocide of sort perpetrated in liberal cities, governed by liberal mayors and governors, and overseen by liberal police chiefs. The shooters are overwhelmingly other black males.

Somehow those facts were distorted by the Left into a trope that George Floyd was typical of an epidemic of white-generated lethal racial hatred. One can certainly argue about systematic racism as being a factor in all these asymmetries, but that is not what the rioting and their apologists have done in trafficking in accusations that have no data to support them.

There is no logic to statue toppling, name changing, or culture canceling other than the quest to assert power, humiliate authorities, and create crises where they do not exist in order to manufacture a faux state of emergency—in service of a political agenda. In some sense, whether any statues fall is contingent entirely on the lack of resistance.

We know this because the ignorant rioters and protestors cannot explain why monuments to Ulysses S. Grant, Cervantes, black Civil War veterans, or Abraham Lincoln need to be toppled and destroyed as much as a statue of Robert E. Lee.

We are not told why the Woodrow Wilson School at Princeton is canceled out, but not the Wilson Center in Washington, or why a memorial to President Washington is targeted for defacement but not the hit play, “Hamilton,” another founder who at one time owned slaves.

And what or who, if any, exactly is to replace our fallen luminaries? Name the most iconic—Martin Luther King Jr., Malcolm X, or Che Guevarra and the current rules of perfection would disqualify them all.

The abettors of the madness—corporations, the Democratic National Committee, universities, and the media—are not so mad. Yale, named for a slave owner, is now mostly a brand name, not a certification of a first-class, disinterested, and classically liberal education.

Take the elite stamp away, and what replaces it might as well be an online degree mill—given that it is no longer so demonstrable that a Yale graduate learned more than in his four years than did a graduate of Cal State Stanislaus.

So university presidents at Princeton, Yale, Stanford, and Columbia know that by the standards of BLM their brand names must be changed. But to do so is synonymous with multi-billion-dollar losses and the destruction of centuries-old brands.

Perhaps that is why they pander to the mob the way a Roman would-be emperor outbid rivals seeking to win over the Praetorian Guard.

The truth is that the COVID-19 epidemic, the lockdown, and the rioting were seen by the Left, the media, and now the Democrat Party as a renewed effort in this election year to do what Robert Mueller, Ukraine, and impeachment had not—abort the presidency of Donald Trump, or make it impossible for him to be reelected.

So Trump was to be reconfigured as a racist responsible for the death of George Floyd. Then he was smeared as a Herbert Hoover who supposedly crashed the economy all on his own. And then he became a Typhoid Mary purveyor of death who sickened and killed tens of thousands of Americans at his rallies in a way millions at left-wing protests did not.

To that end, almost daily, entire fantasies were birthed, floated, crashed, and then were replaced by new hoaxes. The strategy was that while one lie might be refuted, the bigger and more numerous the lies, the more a continuous narrative could be fabricated.

Consequently, the last two weeks, in succession we were told by the media:

*That a noose was left in a NASCAR garage as a racist threat to NASCAR’s only major African-American driver, typical of Trump’s racist America;

*That Donald Trump, in dejection and self-incrimination, was soon to quit rather than face the humiliation of a landslide defeat in November;

*That the president knowingly rejected intelligence that the Russians were paying bounties on American soldiers in Afghanistan, as part of his obeisance to Vladimir Putin;

All were not just lies, but respectively unimaginative and banal successors to similarly long ago discredited lies—the Jussie Smollett hoax, the “Trump never wished to be president in the first place” hoax, the Russian “collusion” hoax, and the hoax that Trump’s presence turns once esteemed monuments that prior presidents, most recently Barack Obama, visited into racist dog whistles.

Then there was the monstrous lie that Joe Biden has no cognitive disabilities.

That he does was the consensus of one in five polled Democrat voters, of many of his own primary rivals in numerous Democrat debates, of handlers who bragged that his basement quarantine need not end because it resulted in him outpolling Trump, of a scramble to turn the vice-presidential nomination into a veritable presidential bid, and in a litany of gaffes, blank outs, and tragic memory lapses of familiar names, places, and common referents.

Biden finally came out of his bunker to do some tele-fundraising and talk to a few preselected reporters. He almost immediately blasted a reporter as a “lying dog face.”

In one of his next appearances, his opening statement started with “I am Joe Biden’s husband, even as the liberal media insisted “Joe” was “Jill.” There is now a Biden-inspired cottage industry of arguing that what Biden is recorded as saying is not what he was saying—on the theory that he so poorly pronounces words that they can become almost anything you wish.

What is cruel is cynically using a cognitively challenged candidate for the purpose of winning an election and then replacing him with a far-left vice president who otherwise likely would never have been elected.

FDR and the Democrat Party did something similar in his successful fourth-term bid in 1944 because of FDR’s anticipated early death in office—but in matters of hiding physical rather than cognitive impairment. Moreover, at least that dishonest gambit was undertaken in order to prevent a socialist takeover of the United States by jettisoning the hard leftist, Vice President Henry Wallace, replacing him with Harry Truman.

In 2020, the effort is not to ensure that a socialist not be appointed president who otherwise would not have been elected, but rather to ensure that she will be.

The brand of all cultural revolutions is untruth about the past and present in order to control the future. Why we have let this happen to our country is the only mystery left.