A CRUCIAL SANITY PERSPECTIVE FOR MASTERING OUR MOODS 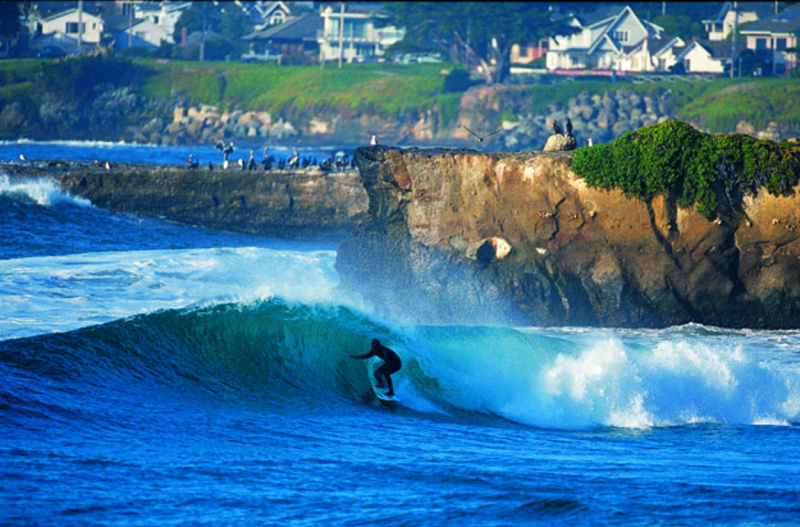 Surf’s up at Santa Cruz

The idea that our bodies are machines has, in one form or another, been around for a very long time, though it’s often attributed to the French philosopher and mathematician René Descartes (1596-1650).

This idea leads us to think that the more we can separate out the discrete parts of the human machine, and understand the pieces of the mechanism, the more control we can have of our actions.

But the idea that we are machines is far too simplistic to explain what we are.

Back in the days of Sigmund Freud in the early 1900s, the world was powered by steam. Everything was pressure, force, heat, release of pressure, explosive pressure…

Because we tend to understand ourselves in relation to the world we live in, Freud and his students created explanations of human functioning – in particular our emotions, drives, and instincts – in terms of build-up and release, just like the steam engines of their time.

This formed the basis of the charge/discharge theories of emotional release that were influential in psychotherapy and pop psychology in the 60’s 70’s and into the 80’s – and that still resonate in popular culture today.

But we aren’t steam engines, either.

More recently, it’s been popular to think of our brains as computers, with hardware and software, running programs that we install or have had installed. But though some functions of our brain seem to work that way to a degree, the truth is that we’re not computers, either.

Analogies are fine as far as they go, but the best that such explanations do is give us a rough approximation of certain qualities or experiences, while the worst they can do is give us the illusion that we understand ourselves in ways that aren’t true.

We’re much more complicated and elegant than any of these ideas. At our foundation, we are biological organisms. Growing, learning, changing, living beings. I find that understanding this seemingly self-evident truth makes sense of a tremendous amount of human experience; and helps to de-mystify a lot of our troubles and challenges, too.

Our hearts contract, pushing blood through our bodies, then expand taking in more blood to push through with the next contraction. We inhale taking in oxygen, and exhale releasing carbon dioxide.

When we try to fight against these rhythms – by not getting enough sleep, disrupting the pattern of our sleep, or fighting through those 20-minute resting periods during the day – we can waste a lot of energy, and cause a lot of trouble for ourselves.

We’re fluid in so many ways, and understanding this can help us to master ourselves, to move with the rhythms of our experience.

Here in Santa Cruz, California a lot of people surf. Mastering surfing has nothing at all to do with controlling the waves you ride. Trying to do that would be really silly, and dangerous. The wave is a given, the mastery comes from knowing the waves, understanding their rhythms, their shape, how they move, what they do. Then you ride the waves as they present themselves, harnessing the tremendous power of their motion for the joy and exhilaration of the ride.

When we experience something big, like losing someone we love, the process of grieving isn’t a rigid and predictable thing. We don’t feel sad and nothing else for an extended period. We don’t predictably go through the stages of grief that Elizabeth Kubler Ross described in a precise order of denial, anger, depression, bargaining, and acceptance.

Grief is much weirder than that. There are times after the initial shock when we’ll actually feel fine, like a regular day is happening. Then out of the blue a wave of deep sadness will hit, and we’ll find ourselves sobbing. Then if we allow it, that wave will pass, and we’ll feel something else, maybe even a kind of joy from the love we felt toward this person. Then something else will hit, maybe we’ll feel angry for the loss, or frightened for our own mortality, or something else entirely.

If we try to control this flow too rigidly, it makes it harder to function – like trying to hold back an ocean wave, we find ourselves instead being thrown wherever the wave propels us; or we can end up feeling stuck in a particular emotion we’re holding onto, wallowing in the feelings like the muck of a stagnant pond.

But if we accept the wave as it is, and ride it, then we can direct ourselves, to a degree, toward where we need to go.

Accepting our emotions, welcoming them even, and then redirecting our attention to something else, is a much more effective strategy for functioning through strong emotions than trying to ignore, deny, or stop those emotions.

Our mood system has its own liquid form. If we try to ignore it or persevere too rigidly in opposition to it, we can get into trouble, and depression can be one of the consequences.

One of the functions of our mood system is to let us know when it seems that a goal we’re working toward is actually not possible to achieve. Jonathan Rottenberg, in his brilliant book, “The Depths,” describes this in detail.

In experiments with mice, where they’re held by their tails and unable to escape, they’ll struggle for a time, and then once it’s clear they can’t escape, they relax, giving up the fight. This may look like a bad thing.

In fact, these experiments are used by drug companies to find new candidates for antidepressant medication. If a chemical makes these little critters persevere longer before giving up, that’s seen as countering depression.

But this giving up isn’t really depression – not initially, anyway. What’s actually happening is an effective survival process. If the mouse can’t really escape, then continuing to struggle puts more stress on their system, and that stress over time can be enough to even kill them.

Better to relax, let go of the fight for now, and hope for something to change for the better – which happens enough in life to make this an effective strategy. In the experiments the mice are released after a few minutes and can get on with other things.

So what happens when we continue to struggle in an impossible situation? Heroic and inspirational stories of perseverance encourage us to keep at it – and the quality of grit that allows us to endure through difficult times in pursuit of long term goals is one of the strengths that can lead to a deeply satisfying and successful life.

That applies if the goal is difficult, even tremendously difficult; not if it’s impossible.

If the goal is not actually possible to achieve, our mood system tries to get us to stop. We’ll feel tired, maybe helpless.  That’s a cue of our mood system to relax, reorient to our situation, and maybe think of other possibilities – including letting this particular goal go.

At that point our mood system has done its job,  so we can aim ourselves in a direction that’s more likely to be successful, feel re-energized for the next thing, and get on with it.

But if we ignore our fatigued mood for too long and continue to push against the wave that reality is facing us with, then our mood system will hit us harder — “You’re not listening to me, you need to stop it, now!” — and we can feel depressed. Continue longer, and the depression can deepen. Sometimes dangerously so.

If we think of ourselves as machines, or computers, or steam engines, we can make the mistake of thinking we need to just keep pushing – if only we could find a different program for the computer, or better parts for the machine, or fuel for the steam engine.

But that kind of thinking can blind us to the solution that can seem obvious – if we think of ourselves as organic: Take a break, breathe, allow the ebb, the contraction, a bit of dormancy. Open ourselves to a bit of daydreaming, let our thoughts relax and extend outside of the narrow focus of the specific problem.

Just as it’s important to honor our circadian rhythms and follow our natural need for sleep; and our Basic Rest Activity rhythms to allow for breaks during the day, paying attention to the rhythms of our emotions and moods can help us to live healthier as well.

Not that we let our emotions rule us – that can be disastrous in its own way – but getting to know our emotions and moods so that we can ride them with mastery.

This rhythmic, organic quality can be a huge resource, but we each need to learn to ride our own unique waves. The more we get to know our own rhythms, the more effective we can be.

When do you naturally feel more creative, in the morning, the afternoon, the evening? What time? Chances are there’s a rhythm to it.

When do you feel most sociable? Chances are there’s a rhythm.

If you’re pushing yourself to be equally focused and productive throughout the day, you may be missing the power and effectiveness of your best flow in trying to push through a natural resting ebb.

If you’re trying to function well without allowing yourself a regular good night’s sleep, or significantly changing your sleep times throughout the week, you’ll be creating a tremendous handicap over time, depriving yourself or your full mental and emotional resources.

If you’re trying to treat yourself like a machine, a steam engine, or a computer, you’ll be missing the true power and beauty of who you are.

As wonderful as engines, machines, and computers are, we aren’t any of these things. We’re much more magnificent and complex than that.

Appreciating and mastering the beauty and rhythm of our organic, growing, learning, changing, living selves can make the difference between being pummeled by reality, or feeling the exhilaration and beauty of skillfully riding the waves of life.

PS: My new course, Mastering Emotions, Moods and Reactions goes into this in much more detail, with deep understanding and practical skills for mastering these systems, and living well.

Joel F. Wade, Ph.D., is the author of The Virtue of Happiness,  Mastering Happiness, his new course, Mastering Emotions, Moods and Reactions, and The Mastering Happiness Podcast. He is a marriage and family therapist and life coach who works with people around the world via phone and video. You can get a FREE Learning Optimism E-Course if you sign up at his website, www.drjoelwade.com.