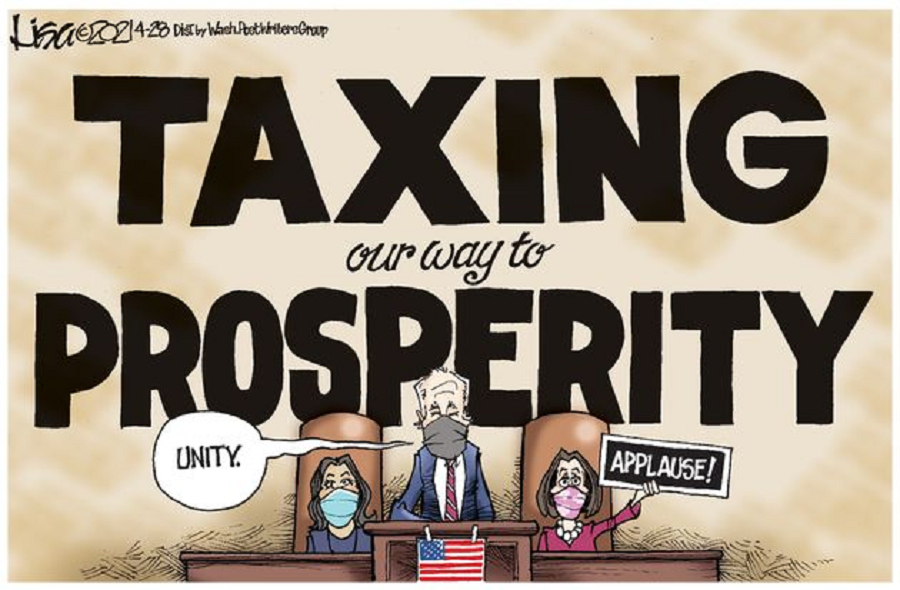 The best aspect of Zhou Xiden’s Hate Speech to the Nation from the House of Representatives was his competent and persuasive delivery. He once again beat back the claims that he is a senescent, robotic dummy of severely diminished cognitive abilities.

It was just reading a Teleprompter, but everyone remembers what an almost insurmountable challenge even that was at times in his candidacy, while the national political media conducted his campaign for him.

He spoke to a sparse, well-distanced corporal’s guard of well-masked and double-vaccinated legislators signaling their doubts about vaccines and determination to continue the COVID lockdowns that helped get Biden to the White House but they all seemed absurd.

He did not mention his predecessor and his entire address of over an hour was based on the only argument the Democrats have put forward on their own behalf in the last five years: Trump hate. He assumed the headship of ”a nation in crisis,” in which our “house was on fire,” and “We stared into the abyss of insurrection and autocracy,” a pitiful and almost subliminal appeal to the Trump Monster.

The country had “done nothing about immigration in 30 years,” (most of them under Clinton and Obama), except that under Trump illegal immigration was reduced by 90 percent, and the principal problem was effectively solved until Biden stopped construction of the southern border wall and reopened the borders.

He said it was time to do something about the ”dreamers” but that was not the policy of his party when Trump attempted to help them. Biden called for resources to deal with the “root cause of why people are fleeing” Central America as if it were the business of the United States to raise the welfare of those poor countries, and feed more graft into them, rather than to monitor its own border and apply a sane system of an admission of immigrants.

He revived the old Obama nonsense about combating employment with unionized green jobs, and leaped into the time warp of bygone days with the bunk that “the middle class built the country and the unions built the middle class, and we must promote the right to unionize.”

Unions today are an almost wholly retrograde force redundant to market pressures for higher wages and better working conditions and largely confined to the stagnant backwater the public sector.

The former administration created huge numbers of “millionaires and billionaires who cheat on their taxes…adding $2 trillion of debt and extending the pay disparity between the chief executive and the lowest wage earner to 320 to 1.”

Naturally ignored were the facts that under his predecessor the income taxes of 83 percent of taxpayers were reduced, the number of positions to be filled exceeded the number of unemployed by over 750,000 and the lowest 20 percent of income-earners was in percentage terms gaining income more swiftly than the top ten percent.

He taxed the former administration with “trickle-down” economics, though that charge was leveled at President Reagan’s massively popular and successful economic policies. Most outrageously, Biden took all credit for 220 million vaccinations with no hint that if it had not been for Trump’s direct intervention to accelerate the development of vaccines, none of it would have happened.

Almost as disingenuous was the claim that House of Representatives Bill Number 1, which would effectively eliminate any serious method of verifying the validity of individual votes, is really an attack on the Republican effort to attack “the sacred right to vote.“

That bill is almost certainly unconstitutional, would institutionalize and protect mass ballot harvesting, and it ignores the fact that 77 percent of Americans support photo-identification for voters.

The climate was again bandied as an “existential crisis” even though Biden acknowledged that the U.S. only provides 15 percent of the world’s carbon emissions. He also omitted to mention its splendid record in reducing those omissions even though there remains no convincing argument that they are relevant to the alleged crisis.

Foreign affairs was an unrecognizable dreamworld: ”while leading with our allies” and  “working closely“ with them to deal with Iran and North Korea, (principally by recommitting the West to acquiescing in Iranian nuclear militarization), he will ”stand up to (Chinese leader) Xi” whom he realizes is ”in deadly earnest” in his determination to supplant the United States as the world’s most important country.

After the usual reassertion that everyone is created equal, Xiden slipped in the need to ”root out systemic racism that plagues America… White supremacy is terrorism” and has “surpassed Jihadism” as a menace.

He gave no hint of what he thinks of organizations that are constantly threatening to burn America down if they’re not successful in extracting a full-body immersion in self-humiliation from the majority of Americans who despise all racism.

Rarely in his rabidly bowdlerized summary of the nation’s affairs does the president allow the truth to intrude. This made the opposition response by Sen. Tim Scott of South Carolina particularly effective.

In sum, Biden’s address was cringe-worthy, fatuous, and deeply distressing. The State of the Union is almost at suicide watch.