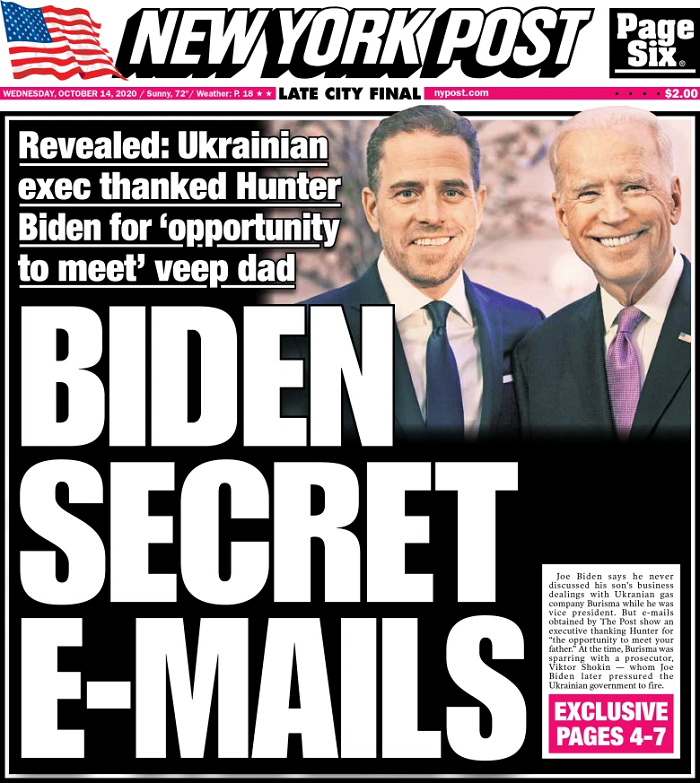 This is the NY Post’s cover this morning (10/14).  An explosion of media headlines followed.  Here’s a delicious quartet:

Joe Biden’s links to Burisma ‘as damaging as can be,’ Giuliani says

Joe Biden’s corrupt, debauched, coke-addled son Hunter has been found to have sold access to his dad’s office for tens of thousands of dollars. That’s the obvious conclusion from a trove of emails with his name on them, showing him driving a hard bargain for his pay to play game, making sure he got paid up front.

And Vice President Joe Biden, who’s now running for president? He’s been caught red handed, lying to us about not knowing a thing.

Because sure enough an abandoned computer has turned up, according to the New York Post, loaded with Hunter’s emails, showing him promising to give corrupt Ukrainian oligarchs access to Joe for a price.

“The never-before-revealed meeting is mentioned in a message of appreciation that Vadym Pozharskyi, an adviser to the board of Burisma, allegedly sent Hunter Biden on April 17, 2015, about a year after Hunter joined the Burisma board at a reported salary of up to $50,000 a month.

“Dear Hunter, thank you for inviting me to DC and giving an opportunity to meet your father and spent [sic] some time together. It’s realty [sic] an honor and pleasure,” the email reads.

An earlier email from May 2014 also shows Pozharskyi, reportedly Burisma’s No. 3 exec, asking Hunter for “advice on how you could use your influence” on the company’s behalf.

The blockbuster correspondence — which flies in the face of Joe Biden’s claim that he’s “never spoken to my son about his overseas business dealings” — is contained in a massive trove of data recovered from a laptop computer.”

The emails were discovered in a way that was about par for Hunter’s character: Hunter apparently turned in his Apple MacBook Pro in to a repair shop in 2019, and then ran out on his tab, not bothering to pick the computer up after the technicians did the work, leaving the store in hock.

The store owner tried to contact him, got ghosted, and then poked around, finding all kinds of evidence of political and personal sleaze on the device. Then he turned the matter over to the lawmen, but kept a copy of a hard drive, which the Post obtained.

Speaking of sleaze, there was also this:

“Other material extracted from the computer includes a raunchy, 12-minute video that appears to show Hunter, who’s admitted struggling with addiction problems, smoking crack while engaged in a sex act with an unidentified woman, as well as numerous other sexually explicit images.”

Which rather suggests that the Russians or any number of bad actors might just have copies of the same, known in their world as Kompromat. That would allow them to squeeze Hunter, and quite possibly old Joe for whatever they wanted, just to keep the scuzzy reality from getting out.

Joe Biden, though, is the one who ought to be on the hottest of the hot seats: He’s insisted for years that his son Hunter “did nothing wrong” and in any case, he never discussed business with Shakedown Junior, who often accompanied his dad on his foreign travels, following him around almost as if his black bag was outstretched.

The Post has that angle in this separate article here:

“In the email, Hunter Biden wrote to Archer, ‘We need to ask for long term agreement and across the board participation. This is a huge step for us that could easily become very complicated. And if we are not protected financially regardless of the outcome we could find ourselves frozen out of a lot of current and future opportunities.

“The contract should begin now- not after the upcoming visit of my guy.

“That should include a retainer in the range of 25k p/m w/ additional fees where appropriate for more in depth work to go to BSF for our protection. Complete separate from our respective deals re board participation’.”

And it turns out Joe knew all about it, as the Post reporting describes.

Which would also explain why Biden gets so touchy whenever the matter is brought up. The last person who brought it up directly with him was called: ‘Hey, fat!’ and challenged to a push-up contest.

Why the FBI and Barr’s DOJ let this one go, just as the coup attempt against President Trump has been allowed to go, and the pay to play corruption at the Clinton Foundation is quite a guess.

But at some point this has to stop, and Hunter appears to be as good a place as any. Hunter sold the U.S. down the river for his own personal profit. And the Mister Big protecting him was none other than Joe Biden.

It’s time to roll this raw corruption up, starting with exposing Joe’s lies and forcing to answer some questions.  Either indict or resign, Mr. Barr.