WILL PUTIN’S LATEST SCHEME BE LIQUID GOLD OR FOOL’S GOLD? 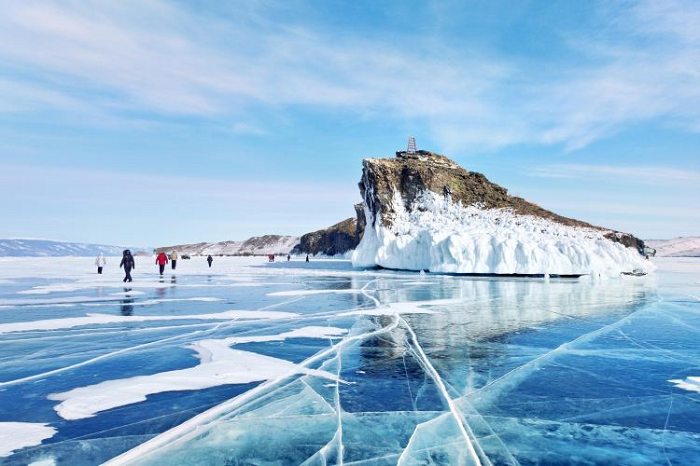 [Prefatory note by Jack Wheeler. Four questions on lakes: What is the world’s oldest lake? The world’s deepest? The world’s clearest? The world’s largest by freshwater volume?  The answer to all four is: Lake Bailkal in Russian Siberia.  My friend of almost four decades, Paul Goble, here focuses on the last question.  Baikal has more water than all of the Great Lakes combined – over 5,600 cubic miles of clear drinkable freshwater.  Putin thinks he can sell it to the Chicoms. Paul discusses the pitfalls.]

Given the Vladimir Putin regime’s past reliance on oil exports, it is perhaps no surprise that Moscow has been casting about for some other raw material it can sell abroad now that hydrocarbon prices have fallen and Russian government revenues along with them.

But its apparent selection of water as “liquid gold,” “the new oil” that it can sell to water-short China is again outraging Russians. Indeed, the policy may soon lead to the repetition of protests against such projects that roiled the country east of the Urals in 2019 and 2020.

And this could complicate Russia’s relations not just with China but with Mongolia and Central Asian countries as well. By focusing exclusively on the possibility of foreign profits rather than the concerns of its own population, the Putin regime—wittingly or not—is recapitulating some of the steps the Communist leaders fatefully took in the years preceding the disintegration of the Soviet Union.

According to Russian telegram channels, oligarch Oleg Deripaska plans to promote the export of water from Lake Baikal to China and will be working on this together with the VEB development corporation, now headed by his close associate Igor Shuvalov (Krizis-Kopilka, February 17).

The temptation to use water as an export commodity is enormous: Russia has the largest reserves of potable water of any country on earth, many of these reservoirs are concentrated in areas with only small Russian populations.

Lake Baikal is a particular object of interest because it contains so much fresh water while lying close to the borders of Mongolia and China. Consequently, the possibility of selling water to Beijing has long been discussed in the Russian capital.

But even if water appears to be a promising “new oil” candidate, it carries with it significant symbolic and practical risks.

Many Russians and especially those living east of the Urals see Lake Baikal as a national treasure that must be protected and preserved rather than sold off wholesale or retail to businesses or foreigners. For 40 years, Russian activists have organized to seek the closure of a polluting cellulose plant on the lake’s shores, finally forcing Putin to agree to shut it down.

Moreover, they see Russian rivers as a reserve for the future: consequently, Russians oppose ideas to reverse the flow of certain internal rivers to bring water to Central Asia or to China as a betrayal of the country’s national interests.

It is worth noting that opposition to Siberian river diversion to Central Asia catalyzed the first stages of Mikhail Gorbachev’s broader perestroika plans.

Yet it is not solely about symbolism. Russians, especially in Siberia and the Far East, are upset that Moscow feels free to make profitable deals about their territory without consulting them and are convinced that Beijing really does plan to use its economic penetration of the region as the basis for eventually establishing Chinese control of what are now Russian lands.

And most strikingly, Siberians and Far Easterners appear just as angry at Moscow as at Beijing. Their fury has been exacerbated in recent weeks by the appearance of new blog posts in China arguing that Russia should pull out of all territory east of the Urals and hand it back to Beijing.

That has so outraged Russians that some of them are now demanding that the Federal Security Service (FSB) take steps to counter such messaging (T.me/sytosokrata, February 16).

This crisis has been brewing since at least 2016, when Moscow agreed to permit Beijing to open a water bottling plant on Lake Baikal and began talking about river diversion southward from Russia’s Altai Republic to drought-stricken regions of China (RIA Novosti, May 3, 2016).

Russians east of the Urals were outraged and collected nearly a million signatures on a petition in opposition even to the export of bottled water to China let alone any bigger steps. In 2019, they organized demonstrations in more than 50 cities in the Russian Federation and around the world (Sibreal.org [1] [2], March 24, 2019; Planeta, March 6, 2019).

Those protests forced Moscow to suspend construction of the bottling factory and put on hold any larger water-export projects (Newsland, March 16, 2019; The Moscow Times, March 11, 2019).

Nevertheless, the temptation to make money from selling water to China has not dissipated—but neither has Siberians’ opposition to such a project. Meanwhile, problems such sales raise with other countries in the region also remain.

Indeed, disputes with Russia’s other neighbors may be greater now than in the past.

Mongolia is currently building dams that will limit the flow of water into Russia; and the Central Asian countries of Kazakhstan, Uzbekistan and Turkmenistan are again looking northward because flows from their traditional sources, Kyrgyzstan and Tajikistan, have slowed significantly over the last several years (Qmonitor.kz, December 21, 2020).

Last summer, Putin set the stage for a new crisis—not only by declaring that the Russian Far East is open for business but more specifically by issuing rules governing the exploitation of Lake Baikal that will make it easier for Russian firms to work with Chinese ones and send water southward (Sibreal.org, August 2, 2020).

Russian opponents of such moves collected more than 200,000 signatures on an online petition (Change.org, accessed February 23, 2021). Had there not been a pandemic, it is likely that they would have taken to the streets given how angry any steps in this direction have made them in the past.

Now, however, the pandemic is set to gradually lessen, presumably leading to the easing of restrictions on public gatherings. At the same time, opposition leader Alexei Navalny’s supporters ushered in a new phase of anti-Kremlin street protests this winter.

Against this background, Moscow’s efforts to use water as “the new oil” are likely to spark a fresh wave of public activism against China and against Beijing’s allies in Moscow. Such rallies are especially likely to multiply as the weather warms, which is virtually certain to make this summer and the upcoming Duma election campaign far more problematic for the Kremlin.