2 The Point News » Guest Authors » Members Only » WILL ITALY KILL THE EURO, KILL ITSELF, OR BOTH?

WILL ITALY KILL THE EURO, KILL ITSELF, OR BOTH? 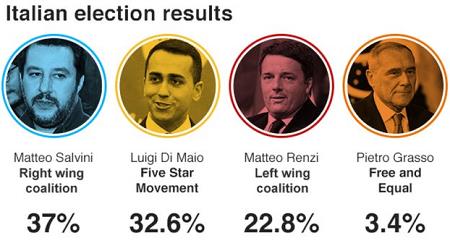 Italy has progressed from pre-insurrectional anger to outright revolt. Insouciant markets are betting that this can somehow be contained. It smacks of delusion.

Risk spreads on Italian 10-year bonds are exactly where they were a week ago before the “anti-system” parties of Left and Right swept away the post-War establishment. The euro has shrugged off the vote entirely, rising 2% against the dollar since the earthquake.

Investors are acting as if they think Italy’s “poteri forti” and its eternal mandarin class will organize another technocrat government regardless of what has happened, or that the Five Star Movement’s Luigi Di Maio will cobble together a co-opted centre-Left coalition that scarcely differs from the last one.

Just months ago, the business lobby Confindustria was still describing Five Star’s neo-anarchist “Grillini” (followers of its founder, comedian Beppe Grillo) as an extremist and dangerous rabble, horrified by their plans to reverse pension reform, reverse the Jobs Act labor reform, and to launch a budget-busting blitz with a universal basic income.

Now damage control has begun. Praise is suddenly effusive for the elegant choir-boy leader Di Maio sitting on 33% of the vote. “Five Star does not frighten us, we have lived through worse,” it says.

This is to play down the genesis of the Five Star phenomenon and the party’s avowed intent to push an eclectic anti-capitalist agenda inspired by the neo-Marxist writings of Thomas Piketty.

“These people are totally hopeless. I had to sit on the budget committee with them and I can assure you that they are incompetent,” says Lorenzo Codogno, former chief economist for the Italian treasury and now at LC Macro Advisors.

“Their policy program is a patchwork put together by 40,000 activists online and is internally incoherent. They don’t have a single person with any economic understanding, and they have had to hire some junior professors that I have never heard of. If they reverse the Jobs Act, every company in Italy will be relocating outside the country,” he says.

Markets take comfort that the immediate threat of a euro referendum and “Italexit” has been taken off the table, but seem not to grasp that the policies of Five Star and the Right’s Lega Nord-led bloc are fundamentally incompatible with membership of monetary union. They amount to subversion of the euro from within, a slower process but more menacing for Berlin and Brussels.

Marco Tronchetti Provera, head of Pirelli, fears we may be seeing the calm before the storm. “Spreads will soar within minutes once we see parties coming into government that tear up the fiscal rules and propose illusory intervention in the economy,” he says.

He warned too that Italy could soon find itself under a draconian bail-out regime along Greek lines. That is where he is wrong. If the EU policy elites try to crush the Italian Spring as they crushed the Greek Spring, they will blow up the European Project.

For now the European Central Bank is shielding Italian debt with bond purchases (QE). The program will expire in September, leaving Italy nakedly exposed to markets with no buyer-of-last-resort. The ECB has in effect been covering the budget deficit for the last two years, accumulating €320bn of Italian bonds.

It cannot easily extend the purchases because it has pinned its colors to the mast, signaling that further QE would amount to illegal financing of governments. The Bundesbank would resist such a move tooth and nail, especially if the purpose was to bail out a populist Italian government in brazen defiance over EU budget caps.

Italy has no margin for error. It missed the global recovery – thanks to the criminal contractionary policies of the ECB from 2010-2012,  the austerity overkill imposed by Germany from 2012-2014, and then the EU “bail-in” policies for bank that shattered confidence and stamped on recovery yet again. The long depression shrank the economic base, pushing the debt ratio higher.

Nine years into an ageing world expansion, Italy has only just begun to stabilize public debt at 132% of GDP.  It comes very late. The eurozone’s QE-driven mini-boom is already fading as the ECB tapers bond purchases. The forward-looking money data – six-month real M1 – has dropped to the lowest since the Great Recession and is pointing to a marked economic slowdown later this year.

The eurosceptic ultras in the Lega Nord already think the next downturn will precipitate a solvency crisis in Italy. They are preparing contingency options to ensure that the country can defend itself and will not fall into the clutches of the eurozone bail-out police.

Almost unnoticed by markets, they inserted plans for a parallel currency into the manifesto of the conservative bloc, which is claiming the right to govern as the biggest of the official coalition groupings with 37% of the vote. It is to be a perpetual treasury note (BOT) used to pay off €70bn in state arrears to Italian companies and citizens, and would be set in motion quickly.

Ex-premier Silvio Berlusconi – the last elected leader of Italy, before four stitch-ups – has long flirted with such an idea to create liquidity and overcome the credit crunch for small Italian companies. It is modeled on the military currency introduced by allied forces after the liberation of Sicily in 1943, and known to Italians as the AM-Lira. 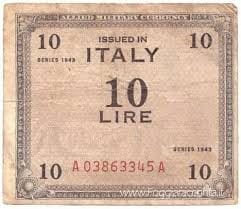 The banknotes were prepared by the Washington Bureau of Engraving and Printing and fixed at an inflationary exchange rate of 100 lire to the dollar. The hybrid paper marched up the peninsular with the troops and served as the lubricant of economic recovery, circulating across Italy until 1951.

Greece’s Yanis Varoufakis wanted to the launch such a parallel scrip when the ECB cut off liquidity support for Greek private banks (arguably illegally) and brought the financial system to its knees. He was overruled by the Syriza war cabinet, who knew it would lead ineluctably to the drachma.

Claudio Borghi, the Lega’s economics chief and the architect of Italy’s plan, states openly that the scheme will evolve over time into a secondary currency under Italian sovereign control, confident that there is nothing that the EU can do about it.

“We are not Greece: we are a much bigger country, and we are net contributors to the EU budget, so how is Brussels going to stop us?” he told me. If it leads to the lira, so be it.

Such a plan would subvert the ECB’s control over the money supply and would destroy German and Dutch political consent for the euro project. Northern states would see parallels with the Latin Monetary Union in the 19th century, undermined by the Vatican’s debasement of silver coinage, and then by Italian use of a loophole to print paper money.

But that is the point. Italian economists pushing this plan want to create circumstances in which Germany chooses to leave the euro in disgust. That is the “cleanest” way to break up the system and prevent a devaluation spiral for the weaker states. Euro debt contracts could then be upheld.

“Everybody now knows that there will have to be a negotiated orderly dismantling of the euro,” says Lega senator Alberto Bagnai, the eminence grise of the Italian eurosceptic movement.  A new struggle is already underway to shape and control the post-euro dispensation.

The EU has handled Italy extremely badly – just as it is now handling Britain badly – and it will not like the consequences.