WILL DONALD TRUMP ACTUALLY BRING PEACE TO THE MIDDLE EAST? 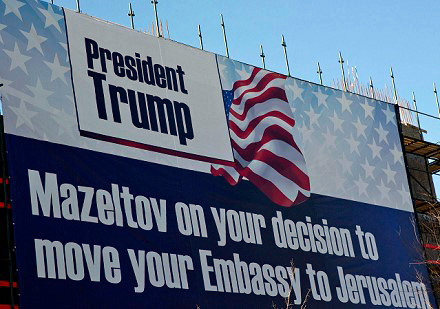 Whatever uproar is occurring from and at Monday’s (5/14) opening of the U.S. Embassy in Jerusalem, that change of venue — promised by several presidents of both parties and mandated by Congress in 1995 but accomplished only by Donald Trump — constitutes an extraordinary development in the seemingly endless history of the Middle East.

And the suspicion is that, after not too long, it will be seen as a hugely positive one.

We may even — mirabile dictu and even though many indications point to the contrary — be gradually entering a period of relative calm in that most contentious of all world neighborhoods.

This isn’t happening because of Trump alone, obviously. Numerous forces are at work.

But the man, possibly because of his lack of foreign policy preconceptions, has a unique knack for seizing the moment and moving forward as he is doing in Korea. He allows his gut to prevail over the advice of a legion of experts.

The era of these experts may now be over — or at least seriously diminished. So-called experts, especially in the area of Middle East politics, have proven to be singularly useless, almost always bogged down in decades-old approaches like the Oslo Accords.

That 1993 agreement contributed little to Israeli-Palestinian peace other than occasionally  giving Palestinian leadership cover under which to pretend they actually wanted a two-state solution.  Their actions, not to mention polling of their constituents, almost always indicated the opposite.

Pushing Israel into the Mediterranean remains the enduring dream of both Hamas and the Palestinian Authority.  Only the styles differ — and not by much.

Now, on Israel’s 70th birthday, Hamas is throwing a massive tantrum on the Jewish nation’s southern border.  It’s easy to see why.

Trump has pulled out of the Iran Deal, putting the financial screws on Hamas’ biggest supporter. What else but riot can the terror organization do? They might have to improve their own lives.

At the same time, a grand realignment is occurring.  Iran’s imperialist ambitions have threatened the Sunni states to such a degree they are siding with Israel.  Unthinkably, Saudi Arabia under its crown prince MBS (Mohammed bin Salman) has become a virtual ally of the Jewish state.

Gulf states like Bahrain are also falling in line.  Did Trump have anything to do with this?  Of course he did.  What do you think he was doing in Riyadh? Tectonic changes of this nature are much easier when facilitated by the president of the United States, the strongest horse of all.

Nevertheless, it would seem, from the events of the past few weeks, that we are looking at an imminent Middle East war of giant proportions. But what is coming, in not too long a time, is the reverse.

Europe may bluster for a bit, but the Iran Deal without U.S. support will exist in name only.  (It was never much more than that.) The Euros will have to decide whether they want to do business with the world’s biggest economy or impoverished Iran.

It’s not much of a choice. After all, Iran’s GDP is smaller than Belgium’s.

Almost certainly the mullahs’ funds for effectuating their violent imperialism will dwindle significantly.  As Richard Fernandez notes, Iran’s mullahs are in a strategic trap in Syria and will likely pull back.  Or allow Israel to punch them a few more times and then pull back.

It comes to the same thing and was undoubtedly part of the intention in Trump’s exiting the Iran Deal.

With Iran weakened, where does that leave the Palestinians?  Almost nowhere.  Pretty soon they will have to make a deal of their own, possibly something like (gasp) what Jared Kushner will be presenting them.  Otherwise they will just be ignored as entrepreneurial Israel gets richer and more powerful in the age of technology.

Israeli PM Golda Meir famously said, “Peace will come to the Middle East when the Arabs will love their children more than they hate us.” After many years. some are apparently beginning to get this message.

Will the Palestinians? Who knows?  But facing reality, hard as it is, is the only way to their salvation.

And, ironically, Donald Trump — the man they love to burn in effigy — moving the embassy could be the first step to their accepting the truth and eventual peace. The process will be arduous, but it may have started ereyesterday, May 14, Israel’s 70th birthday — in Jerusalem.