Nearly 7 million absentee votes were cast, mostly for Joe Biden, in the three states responsible for his presumptive win; a mere 250,000 votes now separate Biden from Donald Trump in Michigan, Wisconsin, and Pennsylvania.  Only 20,000 in Wisconsin.

Trump’s victory in that once solid “blue wall” in 2016—Wisconsin last elected a Republican president in 1984—shocked the nation and elevated him to the presidency.

The three pivotal Rust Belt states have something else in common: according to state election laws, mail-in ballots cannot be processed prior to 7 a.m. on Election Day. (Michigan has a slight caveat for larger cities, which allows ballot inspection to begin the day before.)

It’s clear that Pennsylvania election officials violated the law by alerting voters to correct mistakes on or “cure” their mail-in ballots days before Election Day. This means not only were election workers inspecting mail-in envelopes in advance of the legal deadline, the unlawful pre-canvassing occurred without observers present, another obvious violation.

Further, Pennsylvania is one of several states that does not have a ballot “curing” provision on the books.

“Ballot curing refers to the process by which voters can correct mistakes—such as a missing or mismatched signature—with an absentee/mail-in ballot so that the ballot can be counted,” according to Ballotpedia, an online repository of election data and information. “Ballot curing provisions lay out this process in state law. States without such provisions do not count absentee/mail-in ballots with errors.”

Pennsylvania voters had the option to check a database to see if their ballot had been rejected; if so, the voter needed to request a provisional ballot, not correct the existing one.

Wisconsin also doesn’t authorize any sort of ballot “curing.” But, just as in Pennsylvania, that didn’t stop election workers from contacting voters about erroneous—i.e., disqualifying—information on their mail-in ballot envelopes.

Wisconsin law requires the voter’s signature, a witness signature, and the witness’s address on the mailing envelope, which acts as a certification for the enclosed ballot. Deficiencies in any of the verification steps should render the ballot invalid; the requirements meet the bare minimum for any sort of legitimate absentee voting.

But even that low bar was too high for some Wisconsinites, so election officials stepped in, without explicit authority under Wisconsin election law, to help.

“We make every effort that we can to contact them,” Monona City Clerk Joan Andrusz told a Dane County news outlet in late September. “[We] fix what we can in the office, but if we can’t, we will have to mail the ballot back.”

That “fix” included election clerks writing in the home address of the witness if it wasn’t included on the envelope. “Some voters make this mistake when they live at the same address as their witness,” one Wausau newspaper reported on October 27, 2020. “The Wisconsin Elections Commission permits clerks to fill out witness addresses using information they draw from the voter database.”

Whether that guesswork is accurate is, well, anyone’s guess. How would an election clerk know whether the address he attached to the witness signature is updated or even correct? And what’s the point of requesting a witness address if some county workers can simply fill it in indiscriminately?

Claire Woodall-Vogg, the executive director of the Milwaukee Election Commission, confirmed that any in-house corrections were made “in a red pen, so that we know it was our office and not the voter providing the address.”

Even though Wisconsin election law clearly states that any absentee ballot with a missing witness address “may not be counted,” in October 2016, the Wisconsin Election Commission unilaterally decided to undercut that statute by allowing election workers to fill in the blanks:

The clerk is able to reasonably discern the missing address or address component by information appearing on the envelope or from some other source, such as:

“Please note that the clerk should attempt to resolve any missing witness address information prior to Election Day if possible, and this can be done through reliable information (personal knowledge, voter registration information, through a phone call with the voter or witness),” the October 19 memo read. “The witness does not need to appear to add a missing address.”

That guidance doesn’t jibe with Wisconsin’s election law or the commission’s own instructions to voters about how to properly complete the mail-in certification envelope. There’s no caveat that assures voters a missing witness address will be filled in by county election workers.

The Trump’s campaign’s paid recount in Dane and Milwaukee counties unsurprisingly found no extra votes for the president; he remains 20,000 votes short.

Democrat governor Tony Evers, who, like Biden, barely won his 2018 race after a trove of absentee ballots from Milwaukee County put him over the top, certified Wisconsin’s results late Monday (11/30). The president took t legal action against it yesterday: 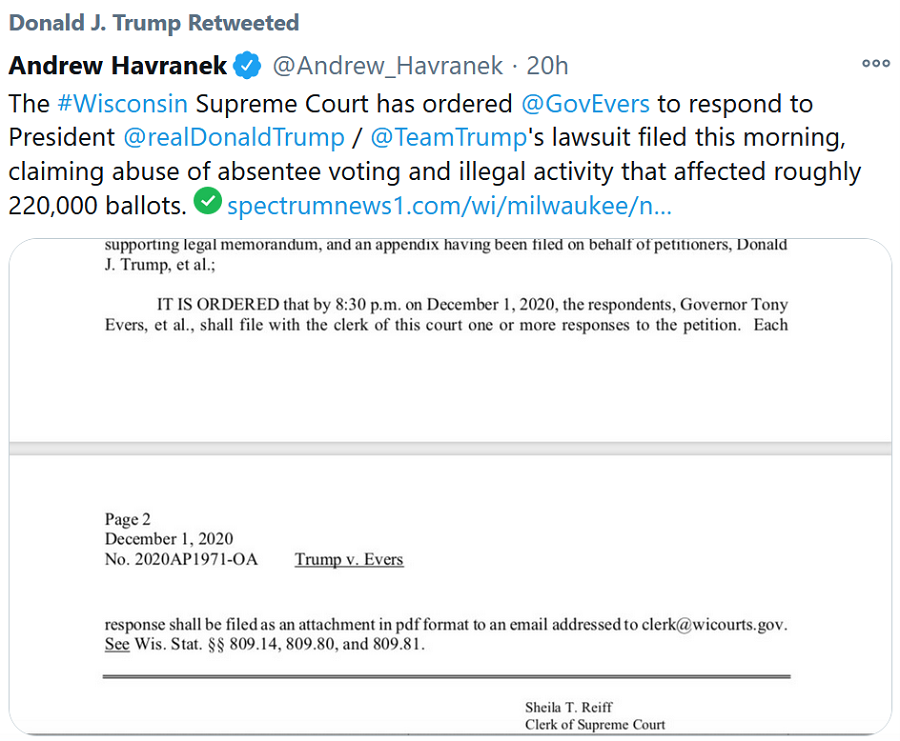 Wisconsin now appears to have the same legal problem as Pennsylvania—clear cut, documented evidence that “pre-canvassing” of absentee ballots, including the unauthorized “curing” of mailing envelopes, occurred well before the Election Day start date and without the involvement of legal poll watchers.

Julie Kelly is the author of Disloyal Opposition: How the NeverTrump Right Tried―And Failed―To Take Down the President