WHY WOKE CAPITALISM’S WAR ON OIL WILL LOSE 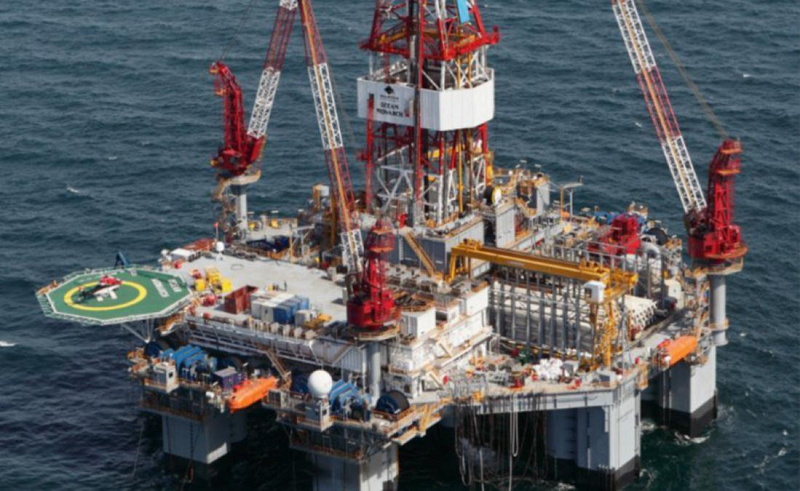 The Woke Capitalists of the World Economic Forum have declared war on the petroleum industry with the excuse of “climate change.”  The vehicle they use is a corporate rating system called ESG (Environment, Social, and Governance) which has been characterized as the Road to Global Fascism.  It’s a war they will lose.

Let’s start with the obvious: Oil is the world’s most important fuel, supplying 35% of all energy and over 95% of transportation needs. More than 6,000 everyday products contain oil as their core ingredient.

Simply put, oil has no significant substitute, and it won’t for a long time. Massive amounts of wind and solar won’t displace “black gold” because these sources compete only in the power-generating sector, where oil effectively plays no role.

Most Americans probably don’t realize that electricity already lost the transportation race to oil and its powerful derivative – gasoline – 120 years ago. In 1900, nearly 40% of U.S. cars were electric. Today, less than 1% of cars run on electric power (1.8 million out of 270 million).

Despite the huge subsidies thrown at the industry over the past 10 years, electric vehicles largely remain “toys for the rich.”

As the world’s economies rebound from COVID-19 and travel inevitably picks up, the need for more oil is becoming even more pressing. After the oil industry set a global-demand record in 2019 at 101 million barrels per day, the pandemic plunged demand to 92 million b/d in 2020.

The Department of Energy, however, has just forecast that consumption will rise to 98 million b/d this year and above 101 million b/d in 2022.

Not even a price surge has slowed the need for a fuel embedded in just about everything we do: Oil prices just saw their best first half since 2009 (see below). In recent months, oil companies have had the best run of any sector in the S&P 500.

Investors that bet against, or pulled out of, U.S. oil fund USO (NYSEARCA:USO) have been burned. The popular oil Exchange Traded Fund nearly doubled in value since October last year, and others such as DBO, BNO, and USL are once again making for sound investments. 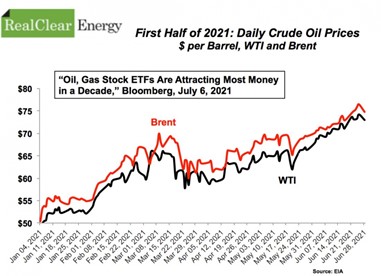 This rising demand exposes the wrongheadedness of the ESG — environmental, social, and corporate governance — push and the feel-good folly of divesting from oil companies.

This shouldn’t surprise us.

As a recent RealClearFoundation report noted, ESG violates modern investment theory, which emphasizes portfolio diversification, because it shrinks the universe of stocks that can be bought. Oil has long been a mainstay in the critical need to diversify any portfolio.

This explains why a 2017 study at the University of Chicago Law School concluded that divestment could mean shortfalls of trillions of dollars for the nation’s top pension funds.

By contrast, input prices for solar and wind – e.g., steel, labor, shipping – have been soaring, and cost declines for renewables are already starting to flatten out. This is happening much faster than predicted and is a problem likely to get worse as decarbonization goals increase demand.

Experts at Piper Sandler believe that oil (and gas) stocks will continue to outperform solar even in the longer term. Eiji Hirano, former head of the world’s largest pension fund, warns of an ESG bubble because there’s been no real analysis to determine whether “ESG is really profitable.”

Divestment pressure has been integral to the chronic underinvestment in more oil production, namely in the upstream E&P (exploration and production) sector that allows new production to meet new demand.

Divestment, therefore, is actually an anti-ESG position because it’s destined to lead to higher energy costs for Americans, proving particularly harmful to communities of color and low-income groups – the same populations that ESG advocates claim benefit from ESG policies.

Without a significant substitute for oil, divestment is an obvious problem because the world’s oil fields decline naturally by 6% to 8% annually, making incremental investment in new supply mandatory, even if demand stays flat or declines. Today’s push against oil could thus be sowing the seeds for the next recession by facilitating a huge spike in prices.

Bank of America already forecasts $100 oil in 2022, and some experts believe that the lack of investment we have seen could eventually push the price to $200.

In other words, those that have divested, or insist that we divest, from oil will leave even more money on the table for OPEC and Russia instead of everyday Americans.

Western media likes to campaign against “Big Oil,” but the term is misleading, at best. Big Oil, as Western media conceives of it, constitutes only about 15% of global oil production and holds just a fraction of proven reserves.

The term would be much more appropriately used for those oil companies that systematically limit competition, seek global market dominance even at the expense of human rights, and enjoy limitless backing from the governments that control them: in other words, the 13-member OPEC cartel, Russia’s “national champions” (Gazprom and Rosneft), and China’s state-owned enterprises.

That’s the real “Big Oil.” They would be BlackRock’s biggest enemies if the company were true to its ESG word. Together, OPEC, Russia, and China control nearly 80% of the world’s proven oil reserves and are salivating at the chance to exploit the U.S. and Western retreat from the world’s most vital fuel.

The three highest-earning oil and gas companies in the world are all controlled by the Chinese Communist Party. Oil is the prime fungible commodity sold on an international market, so these rogue players benefit when their free-market competition in the West loses market share.

Since 2008, the shale oil revolution has allowed the U.S. to cut its imports from OPEC to historic lows – a huge ESG benefit that gets conveniently ignored. In addition, OPEC, Russia, and China have far fewer environmental regulations, so any increased reliance on them for energy is contrary to our climate and emission-reduction goals – and thus also contrary to purported ESG goals.

We are sleepwalking into a geopolitical, environmental, and security nightmare: China is already proving more than happy to fill in for any lack of oil funding from Western banks.

Clearly, then, the ESG divestment movement bears the ultimate contradiction: working to hurt Western oil companies on moral grounds while advancing the cause of some of the planet’s most repressive regimes. 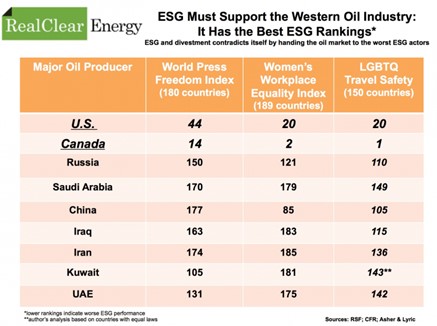 In May, the International Energy Agency, the West’s own energy adviser (for the OECD nations), dropped a bombshell by announcing that to meet climate change mitigation goals, there should be no new E&P (upstream) oil investments.

This shocking declaration came after decades of IEA warnings that annual E&P investment would need to continually account for ever-growing demand. But just weeks later, the IEA asked OPEC – a bloc that it doesn’t advise – “to open the taps” to meet rebounding oil demand and keep prices in check. (The IEA’s influence is more limited than most observers realize because it represents just 15% of the global population.)

Mr. Biden also recently demonstrated the same dangerous hypocrisy. Despite a stated anti-oil agenda that includes stopping new leases for oil development on federal lands and in offshore waters, he has asked OPEC and Russia to pump more crude amid soaring gasoline prices that could hurt his Democrat Party in the 2022 midterm elections.

The ESG obsession with electric cars is also very curious. Passenger vehicles constitute around 25% of global oil demand and around 7% to 9% of all emissions, making them a rather low climate priority. Considering the dearth of material alternatives, petrochemicals, airplanes, and heavy-duty trucking will keep oil demand much higher than the ESG divestment movement claims.

Even this early in the electric car push, we’re already seeing major roadblocks – for example, reports of a permanent lithium shortage. And certain companies and industries touted as crucial to a “clean energy transition” seem to be getting a pass from BlackRock and ESG activists.

Meantime, ESG divestment advocates ignore the oil industry’s climate commitments. The industry is increasingly becoming the “oil and gas industry” since gas is widely seen as essential to the energy transition.

Companies are reducing their emissions much faster than they’re being given credit for, incorporating emerging technologies like carbon capture and storage and hydrogen, and even seeking to utilize wind and solar to fully power operations – as developers of the Biden-blocked Keystone XL oil pipeline recently pledged to do. Pittsburgh-based EQT, for example, the largest U.S. natural gas producer, is on course to become a net-zero emissions company by 2025.

Ultimately, it will be the petroleum oil and gas industry that renders Woke Capitalism and its ESG just another fad destined to fade away.

Jude Clemente is the editor of RealClearEnergy.