WHY THE DEMS ARE IN PANIC OVER THE ARIZONA AUDIT 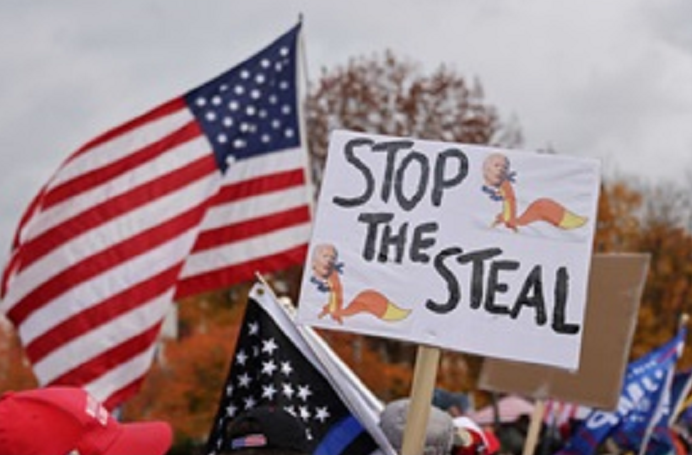 All eyes are on Arizona. Republicans and Trump supporters are certain that the ongoing audit will prove their over-arching allegation that election integrity was nonexistent in the state during the 2020 election.

Democrats and their media sycophants are trying to have both sides of a counter-argument: the audit is “fatally flawed” due to lack of security and faulty procedures, and yet, the election was “the most secure ever,” the allegations of irregularities are unsupported, and there is no need for an audit (all the while fighting through the legal system to shut down the audit on the flimsiest of pretenses).

Democrats argue that The Hologram won the election overwhelmingly. One would think that they would be delighted to stick it to Republicans politically by conducting a forensic audit that would prove their case and embarrass anyone supporting former President Trump’s “The Big Lie” claim.

That proof would also destroy Trump’s credibility completely, making it impossible for him to mount any kind of comeback in 2024. Isn’t that exactly what the Democrats have been trying to do over the past four years through their various hoaxes and impeachment gambits, i.e., to finally “get rid of Trump”?

That they’re not fully supportive of a full forensic audit – and manically against it instead — speaks volumes. What are they hiding by both fighting tooth-and-nail to derail the audit while at the same time giving it their all to discredit the findings even before the results are known?

“Democrats are really worried about the Arizona audit because Democrats know what they did.

And here is why.

The inimitable Ray Blehar, a retired senior DoD analyst, has just completed a top-level analysis of the Maricopa County results. He previously identified irregularities associated with “missing” write-in and minor party ballots in Pennsylvania, Wisconsin, and nationally that he believes were manually adjudicated to provide The Hologram’s margin of victory. His key findings in Maricopa are earth-shaking:

According to numbers from Edison Research (used by all major media), Biden earned approximately 249,000 more votes than Trump in Maricopa County, as depicted in the table below. Note the “Biden lead” column is cumulative, whereas the other columns represent discrete numbers for each vote dump.

According to the official Arizona government website there are over 100,000 more registered Republicans than Democrats in Maricopa County, as shown in the below table:

The other registered voters (the independents shown in the right-most column) delivered ~226,000 votes to Biden and ~80,000 votes to Trump despite polling showing independents favored Biden by only 9 points (53-44%).

Biden receiving nearly three times as many of those votes as Trump is HIGHLY unlikely because even that 9-point split is suspect, as virtually all polls exaggerated Biden’s lead among independents nationwide.

If anything, the split in Maricopa would have been tilted in favor of Trump due to the registration advantage enjoyed by Republicans, making it even more unlikely that Biden could have achieved a lead of ~249,000 votes in Maricopa after those two voter dumps.

Furthermore, exit polls had Trump and Biden within the margin of error in Maricopa (50-48%) —  unadjusted for Trump voter deception in which a sizeable fraction of Trump voters had been determined to not have been honest with pollsters throughout 2020.

That deception cuts both ways, and probably more so among Democrat crossovers, given the large presence of Democrats at Trump rallies throughout the campaign.

Arizona exit polls showed 96% loyalty among Democrats. Are you kidding me? It was probably more like 88% — based on post mortems by pollsters. Likewise, 91% loyalty for Trump among GOP voters is more likely to be 95% based on the same post mortems. The bottom line? Exit polling and post mortem analysis make Biden’s ~249,000 vote margin in Maricopa County seem even more suspicious.

Conclusion: In my opinion, Ray Blehar has identified more than enough “irregularities” to warrant conducting the forensic audit that is underway. Some of these statistical anomalies cannot be simply wished away by the likes of Katie Hobbs and Perkins Coie.

For example, how on Earth was it possible that those two early voter dumps totaled more votes than were OFFICIALLY cast in Maricopa County, and without including same-day and late-arriving absentee ballots cast?

In my opinion, the only question remaining at this point is how many fraudulent votes in Maricopa County will the auditors uncover.

No wonder the Dems are in panic.

Stu Cvrk is a graduate of the US Naval Academy and served 30 years in in US Navy.  In retirement he enjoys being a political commentator.