2 The Point News » Guest Authors » Free Articles » WHY IS OBAMA WAGING WAR ON OUR ALLIES AND NOT OUR ENEMIES?

WHY IS OBAMA WAGING WAR ON OUR ALLIES AND NOT OUR ENEMIES? 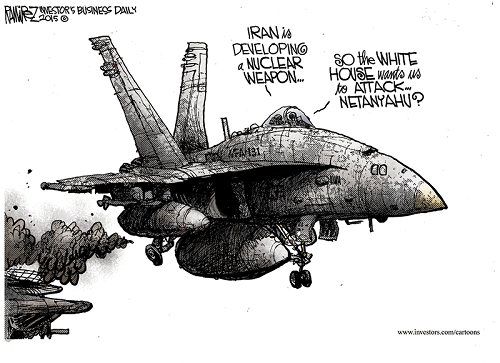 The Obama Administration’s actions towards Israel become more intolerable each day, carrying with their insults deeply damaging national security implications for our country.

Just last week, Americans opened the newspapers to discover that the Obama campaign team has deployed operatives, including 2012 Field Director Jeremy Bird, to Tel Aviv to try to unseat Israeli Prime Minister Benjamin Netanyahu through an organization that receives taxpayer grants from the U.S. Department of State.

This follows a long string of hostile behavior that has only escalated with time.

In The Atlantic, "unnamed senior administration officials" have called Mr. Netanyahu a "chicken****" and bragged that it was now "too late" for him to take action to prevent Iran from gaining nuclear weapons capability.

Last week, more anonymous sources vented to the Israeli newspaper Haaretz that "Netanyahu spat in our face," and vowing "there will be a price" for the Prime Minister’s accepting House Speaker John Boehner’s invitation to come address Congress on the subject of Iran’s nuclear program.

An Obama campaign foreign policy advisor, Daniel Kurtzer, suggested to the New York Times that the Israeli ambassador to the United States, Ron Dermer, should be "reprimanded or removed" for passing along the speaking  invitation from Speaker Boehner.

And, let us not forget how eager the Obama Administration was to impose an unprecedented flight ban against Israel last year during its military operation against Hamas terrorists in Gaza.

At the time, I asked the simple question whether the Obama Administration was using the Federal Aviation Authority to launch an economic boycott against Israel. After their actions were questioned, they quickly lifted the ban.

Now, it is time for another simple question:

Has President Obama launched a political campaign against Prime Minister Netanyahu and his allies?

Prime Minister Netanyahu is a courageous leader, a symbol of Israel’s strength in the face of continued threats from Iran, and Americans who support Israel deserve to know whether their President is actively working to remove him from office.

And, even more troubling, whether U.S. tax dollars are being used to fund the campaign.

Specifically, the Israeli newspaper Haaretz has reported that a U.S. taxpayer-funded non-profit organization called OneVoice is actively working with a campaign operation called Victory 2015 (V15)-working hand-in-hand with Obama field director Jeremy Bird-in an effort to influence the upcoming elections in Israel on March 17, 2015.

Last Friday (1/30), I along with Congressman Lee Zeldin (R-NY), sent a letter to Secretary of State John Kerry to request an investigation into this funding and the propriety of U.S. taxpayer dollars being used to exert undue influence over a foreign election and to destabilize a long-standing ally.

In our letter we asked questions such as: "How much funding has the U.S. Government provided to OneVoice, PeaceWorks Network Foundation, and any connected initiatives, projects or subsidiaries?" and, "Who approved providing such funds?"

"What were the specific reasons and terms for providing funds, and how are these funds specifically being spent?" we asked.

And, "Can the Department of State guarantee that none of these funds have been or will be used in the endeavor detailed above, namely the partnership with V15, or any similar effort to exert undue influence over the Israeli political process?"

All of this is even more perilous given the imminent threat posed by Iran’s active effort to acquire nuclear weapons capability.

The Administration should be crystal clear that we support the nation of Israel, and we should do everything necessary to prevent a nuclear Iran.

If the nuclear negotiations continue on the path they are on, they could prove to be the worst negotiations in our nation’s history. As a result, the possibility of Iran using nuclear weapons against Israel, or us, is unacceptably high.

There can be little doubt that once Iran has, as they have vowed, targeted what they call the "Little Satan," Israel, the mullahs will turn their sights on the "Great Satan," or the United States. The United States and Israel thus have a shared stake in keeping devastating weapons out of Iran’s reach.

The Obama White House should focus its grievances on the very real enemies we face, and not on our staunch allies.

The Islamic Republic of Iran is pursuing the deadliest weapons on the planet-weapons that our most senior and highly respected statesmen believe will be aimed squarely at Israel. This is the real problem, not Netanyahu’s next election.

President Obama should heed the warnings from three former Secretaries of State Henry Kissinger, George Shultz, and Madeline Albright about the dire challenges the United States faces around the globe-first and foremost the threat of a nuclear-armed Iran.

Given that threat, the last thing we should be doing is undermining Israel.

President Obama cannot claim to stand by our allies in Israel if his campaign operatives are actively campaigning against them.

Ted Cruz is a Republican Senator from the great state of Texas.