WHY DEMOCRATS DO NOT BELIEVE IN DEMOCRACY 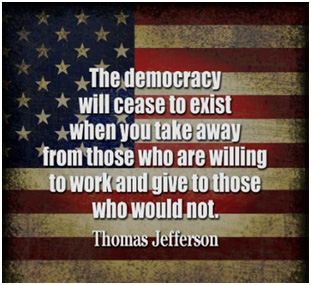 They did once.  In the Reagan years, my best friend in Congress – indeed, my best man at my wedding in 1986 – was a Democrat, Texas Congressman Charlie Wilson.

Charlie was as pro-American as they come.   “A larger-than-life America-loving Communist-hating true-blue patriot who used his power and influence to the max to stick it to the Soviets big time,” as I described him.  He was a passionately partisan Democrat who wouldn’t hesitate to put his country before his party, who had the utmost respect for Ronald Reagan.

I can only imagine the depth of Charlie’s revulsion and disgust over what the Democrat Party has become today.

It has been a long time coming.  The pivot point was in 1972 when the Dems nominated a virtual Marxist named George McGovern whom Richard Nixon obliterated – winning every state except Massachusetts plus DC (540 electoral votes to 17, and over 60% of the vote).

Yet McGovern’s defeat enabled the Marxists within the Dem Party to start gaining control of the party machinery – which they then used to create an alliance with their ideological brethren in the media.  Together, they conspired to enact revenge on Nixon by inventing a phony scandal called Watergate and mushrooming it to the moon.

Granted, Nixon could have snuffed it by burning the tapes of his Oval Office conversations for purposes of “national security” – but he foolishly didn’t, allowing the Dems and the Enemedia to claim his scalp.

Then it was their turn to be foolish in allowing an incompetent nebbish instead of another McGovern to gain the Dem nomination and the presidency.  They couldn’t rev themselves up for Carter, much less Dem voters, so Ronald Reagan thrashed him in 1980 almost as bad as the result of 1972, 489 to 49 electoral votes.

They did their best to belittle Reagan for his first term, then tried to pull another Watergate with Iran-Contra – and failed.  Reagan refused to make any Nixonian mistakes, the economy was flourishing too well, he was too well-loved by Americans.  Then the Berlin Wall fell, Reagan became a heroic icon, while lefties rent their garments and gnashed their teeth in bitterness.

They got a modicum of revenge in 1992 by winning with a white trash president over the Pub equivalent of Carter, and were more than willing to throw their morals overboard in defense of him against quite believable charges of multiple rape, clear proof of sex with an intern, and lying under oath.

This convinced them they could get away with anything.  If a Pub president behaved as did Clinton, there was no question that he would be impeached and convicted.  Clinton was impeached by the House but acquitted by the Senate (not a single Dem voted to convict; 5 Pubs voted acquittal).

But it turned out they couldn’t quite get away with anything.  Chief CBS talking head Dan Rather tried to throw the election on election day, November 7, 2000 when he announced CBS was calling Florida’s 25 electoral votes for Gore – before the polls closed in Florida’s Panhandle on Central Time.

Thousands of Floridian Pubs quit standing in line to vote, resulting in such a razor thin victory for Bush that Gore refused to concede.  When the Florida Supreme Court decided for Bush, the Dem-Enemedia outrage was gargantuan, leading them to poison the well of Bush’s presidency with their hatred of him, and denying him legitimacy throughout both his terms.  They still think he “stole Ohio” from Kerry in 2004.

Bush denounced what he called an “Axis of Evil” in his famed 2002 State of the Union Address little over 4 months after 9/11: Iraq, Iran, North Korea.  That it was – but another Axis of Evil had risen in America itself.

The Marxist Left in the Democrat Party had morphed into being unvarnished Fascist – seeking power not for any ideological purpose or rationale, but simply for power itself.  What they retained of Marxism was its morality – that the end justifies the means.

Since their end was power for the sake of power, then any means to get it and keep it, any lie, any dirty trick, any hypocrisy, any threat, any violence, any corruption they could get away with, is the moral thing to do.  The only thing wrong in their eyes is getting caught – which their Enemedia allies were dedicated to preventing.

Journalists and professors (especially those in humanities) feel their intelligence with words and concepts imbues them with a moral superiority over people who are successful in business.  As such, they are bottomlessly resentful of the self-made wealthy – of anyone wealthy – unless they apologize for their success and embrace self-hatred.

Under Barack Obama – a treasonous hate-filled racist president dedicated to weakening America and strengthening her enemies in every way possible – the Democrat-Fascist/Enemedia Axis of Evil has reached an epitome of power.

And just like a dictator in a banana republic or African hellhole – like Maduro in Venezuela, Mugabe in Zimbabwe, or the Castros in Cuba – they will do anything, perpetrate any depravity or dishonesty, to keep it.

This includes destroying – completely and utterly – democracy itself.  No “free and fair” elections.  No rule of law.  Every institution must be corrupted – from marriage to men & women’s restrooms to the military to the FBI and the Department of Justice.

This is not the future, not what is going to happen – this is what has already happened.  Further, this is no accident, it has been done on purpose with evil malice aforethought.

This is why the Democrat-Fascist/Enemedia Axis of Evil is pathologically supportive of Hillary – for she will keep them all in power, maintain their status quo, and complete the task of totally corrupting America.

So here we are 13 days away from answering the question deciding America’s fate:  will Americans let them get away with it?

The Democrat-Fascist/Enemedia Axis of Evil is apoplectically terrified of Trump – for very good reason.  He will destroy them.  Further, he will destroy their useful idiots and fellow travelers within the Republican Party as well.

That’s his promise.  Yes, it is a leap of faith to believe he will, given his ego, his volatility, and lack of proven track record on conservative principles.  Yet, it is his very ego that is making that leap smaller and smaller.

That is, his ego is now dependent on living up to the admiration of his supporters. That admiration will continue if he, to any appreciable degree, keeps the “contract” he made with Americans in Gettysburg last week.  His ego demands that he not disappoint.

Moreover, Trump has already performed a public service worthy of a Congressional Medal of Freedom:  he has shined a glaring spotlight on Dem Voter Fraud.

It is Democrat Voter Fraud that is the threat to free and fair electoral democracy, not the exposure of it.  Trump should be praised, not condemned, for wanting a honest election – which Hillary doesn’t.

There is no magic bullet to America’s ills, Trump is no Savior, he may not be up to the task, he is very likely to disappoint many people on any number of issues.  But what he will do in the very act of winning is shatter the Dem-Enemedia.  Their power over us is over.  There will be a popular rebellion against them flattening their legitimacy like a steamroller.

And then, we’ll at least have a chance of getting America back again.  A chance is all we can ask of the future. We want a future of freedom, security, decency, and opportunity to prosper.  They want a future of power, control, and corruption.  Ironically, it is we who are small-d democrats, while actual democracy is the last thing they want.

It is, as Ronald Reagan said years ago, a time for choosing.  May Providence guide Americans in choosing wisely.