2 The Point News » Guest Authors » Members Only » WHY ARE WE KEEPING OBAMA’S INCENTIVES FOR ILLEGALS TO INVADE OUR COUNTRY?

WHY ARE WE KEEPING OBAMA’S INCENTIVES FOR ILLEGALS TO INVADE OUR COUNTRY? 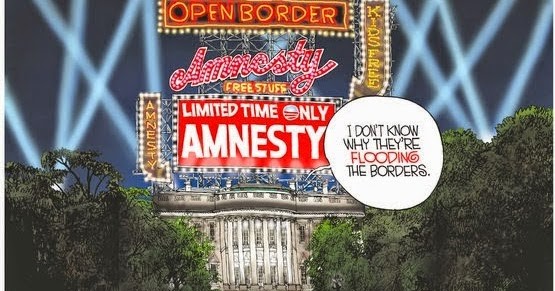 We are witnessing an extraordinary collapse of the rule of law in our immigration system as hundreds of thousands of migrants exploit our generous asylum system by making bogus claims of asylum after entering the United States illegally.

Caravan after caravan of illegal aliens from Guatemala, Honduras, and El Salvador continually are pushing toward our border.  Mexico is warning that the “mother of all caravans” – over 20,000 people – is gathering in Honduras.  Border apprehensions exceeded 100,000 in March – the highest monthly total in twelve years.

I just visited the border yet again recently.  Unfortunately, the news is not getting better.  Indeed, there is no end in sight for the current crisis.  Worse, official U.S. policy is creating massive incentives for the caravans to keep coming.

We are providing huge incentives for migrants to enter illegally and walk up to Border Patrol agents to demand a ride to the Border Patrol stations so they can make what is likely a bogus asylum claim.

We know the claims are likely to be bogus, because the overwhelming majority of these migrants are denied asylum when their hearings eventually occur.  U.S. policy has created three huge magnets for the caravans to keep coming:

ICE has been operating under an Obama Administration policy that started in 2010 of granting the newly-arrived asylum applicants who pass the initial “credible fear” screening “immigration parole,” which gives them temporary lawful presence in the United States.

With parole comes the opportunity to obtain a work permit without first waiting the normal 150 days to apply.  The immigration regulations of the United States spell that out at 8 C.F.R. 274a.12(c)(11).

That work permit enables the alien to obtain employment and compete against U.S. citizens and against those aliens who did it the right way by entering the United States legally.  And it’s not short-term work authorization either.

It’s not the six-month or one-year period that we’ve seen in the past.  Because of the huge backlog in the immigration courts, the migrants are receiving court dates set many years in the future.

In the meantime, they get to work legally in the United States.  It’s as if they are handed a six-year work visa as soon as they arrive.

Many of the aliens who claim asylum are now applying for free EBT card for SNAP (food stamps) benefits. The cards come pre-charged with money so the migrants can start spending, courtesy of the American taxpayer.

As a Border Patrol agent told me, one newly arrived migrant came up and asked about the form to fill out so she could get her “free food card.”

U.S. law allows those who actually obtain asylum to qualify for federal welfare benefits, but now it appears that many asylum applicants may be getting them too.  Again, the Obama Administration parole policy seems to be the problem; the fact that the migrants are being given parole is opening the door to the welfare benefits.

A parolee need only be in the United States for a year before becoming eligible.  And it appears that many are getting EBT cards well before that.

Meanwhile, back in their home countries, those who try to enter the United States the right way – legally – must wait years in the hope of obtaining a temporary work permit that lasts three years at most.  And they must demonstrate that they will not need welfare benefits when they arrive.

In other words, we are treating caravan members who enter the United States illegally much better than we treat their countrymen who follow the law.

Join a caravan and make a bogus asylum claim – and you can work in the United States for twice as long, you’ll get welfare benefits; and you don’t need to ask permission to come in the first place.

In short, U.S. policy has created huge incentives to break the law and join the caravans.  The alien who breaks the law is treated far better than the alien who follows the law.  Why DHS has continued the Obama policy of granting parole to asylum applicants is anybody’s guess.  But the consequences are playing out dramatically in the current crisis.

Something has to change and soon.  In addition to eliminating these incentives, there are other steps that should be taken.  Below is my three-point plan to solve this crisis.  If the United States doesn’t change course quickly, it will only get worse.  Much worse.

1. Publish the final version of the regulation that would supersede the Flores Settlement.  The initial regulation was published by the Department of Homeland Security in September 2018.  DHS could have published the final regulation in December.  Inexplicably, DHS has dragged its feet. Finalizing that regulation would allow the United States to detain entire families together, and it would stop illegal aliens from exploiting children as get-out-of-jail free cards.

2. Set up processing centers at the border to house the migrants and hold the hearings in one place.  The Department of Justice should deploy dozens of immigration judges to hear the asylum claims at the border without releasing the migrants into the country.  FEMA already owns thousands of travel trailers and mobile homes that it has used to address past hurricane disasters.  Instead of selling them (which FEMA is currently doing), FEMA should ship them to the processing centers to provide comfortable housing for the migrants.  In addition, a fleet of passenger planes should deployed to the processing centers.  Anyone who fails in his or her asylum claim, or is who not seeking asylum and is inadmissible, should be flown home immediately.  It would be possible to fly most migrants home within a few weeks of their arrival.  Word would get out quickly in their home countries that entry into the United States is not as easy as advertised. The incentive to join future caravans would dissipate quickly.

3. Publish a proposed Treasury regulation that prohibits the sending home of remittances by people who cannot document lawful presence in the United States.  This will hit Mexico in the pocketbook – Mexico typically brings in well over $20 billion a year in remittances, raking in more than $26 billion in 2017.  Then tell the government of Mexico that we will finalize the Treasury regulation unless they do two things to help us address the border crisis:  (1) Mexico immediately signs a “safe third country agreement” similar to our agreement with Canada.  This would require asylum applicants to file their asylum application in the first safe country they set foot in (so applicants in the caravans from Central America would have to seek asylum in Mexico, rather than Canada); and (2) Mexico chips in $5 billion to help us build the wall.  The threat of ending remittances from illegal aliens is a far more powerful than threatening to close the border. Ending such remittances doesn’t hurt the U.S. economy; indeed it helps the economy by making it more likely that that capital will be spent and circulate in our own country.  We can follow through easily if Mexico doesn’t cooperate.

Kris W. Kobach served as the Secretary of State of Kansas during 2011-2019.  An expert in immigration law and policy, he coauthored the Arizona SB-1070 immigration law and represented in federal court the 10 ICE agents who sued to stop Obama’s 2012 DACA executive amnesty. During 2001-03, he served as U.S. Attorney General John Ashcroft’s chief adviser on immigration and border security at the U.S. Department of Justice.  His website is kriskobach.com.