WHO REALLY HACKED THE PRESIDENTIAL ELECTION 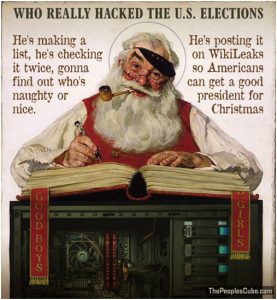 The FBI was able to track the DNC hack to an IP address located somewhere close to the North Pole, but sources close to the investigation said the trail had grown cold.

“As soon as special agents were close to apprehending the suspect, they unexpectedly left the area,” one source confirmed. “They suddenly grew very eager to spend Christmas vacations with their families.”

All we know about the “North Pole Hacker” at this time is that he has an uncanny ability to monitor even the most secret communications in order to compile his annual “naughty or nice” list, which he then cross-references – twice – with corroborative data from other sources.

“The suspect, who goes by the initials SC, usually keeps his list to himself,” the FBI source said, “but this was an unprecedented year in many ways.” It appears that this year the North Pole Hacker broke with his tradition and posted his “naughty or nice” findings on WikiLeaks, allegedly “so that Americans can get a good president for Christmas.”

We will keep you informed as this case develops.