2 The Point News » Guest Authors » Members Only » WHO ARE YOU GOING TO BELIEVE — MICHAEL WOLFF OR YOUR OWN EYES?

WHO ARE YOU GOING TO BELIEVE — MICHAEL WOLFF OR YOUR OWN EYES? 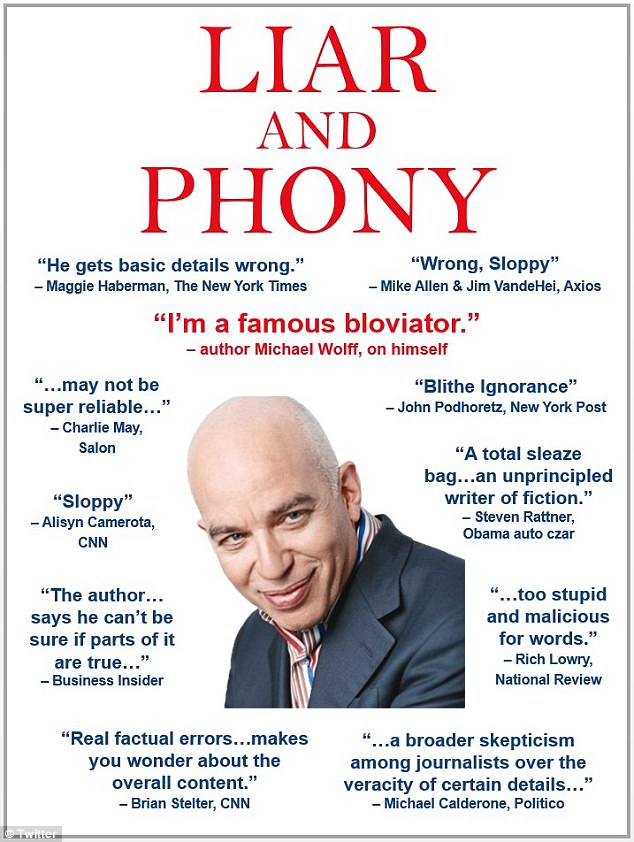 I read as much of Michael Wolff’s “Fire and Fury” as my stomach lining could stand, and then I watched Donald Trump’s last rally of the 2016 presidential election. Groucho Marx’s old line came to mind — “Who are you going to believe; me, or your own eyes?”

He spoke in Michigan, a swing state where Hillary Clinton didn’t bother to campaign, and he hammered on the issues that decided the vote: more jobs, no Obamacare, Washington corruption. Trump was focused, confident, and ruthless.

“Hillary Clinton is the most corrupt person ever to seek the office of the Presidency of the United States…. We are finally going to close the history books on the Clintons, and their lies, schemes and corruption…. My contract with the American voter begins with a plan to end government corruption and to take our country back from the special interests…. We’re going to win today and we’re going to Washington D.C. to drain the swamp.”

That’s the man who neither expected nor wanted to win, according to Wolff. There stood Donald Trump on the day before the election, declaring that he would win, in the middle of the state whose votes would make him win, talking about the issues on which he would win.

More pertinent than what it is, goes the adage about Southern cooking, is what it was, and the caveat applies to Wolff’s “Fire and Fury.”

How much of Wolff’s supposed insider account of the Trump campaign and White House is true, how much invented, and how much cribbed from other reports — some real and some invented — will keep the pundits busy for weeks. What it was from inception was an attempt to show that Donald Trump couldn’t win the 2016 election – and that, if he did, it could only have been the result of an awful accident.

The dead possum in Wolff’s farrago is his unsupported claim that Trump had no intention of winning the election, did not expect to win the election, and was shocked to find out that he had won the election. In fact, I called the election for Trump on September 11, 2016, after Hillary Clinton offered her now-infamous crack about the “deplorables” supporting her opponent.

A political upheaval was in progress like nothing I had seen in my lifetime, propelled by economic stagnation, popular revulsion at political correctness, and a deep sense of wounded dignity at the arrogance of the political elite.

Wolff has not a single on-the-record statement to support his story’s central premise, merely unattributed fluff such as the following:

“Shortly after eight o’clock that evening, when the unexpected trend —Trump might actually win — seemed confirmed, Don Jr. told a friend that his father, or DJT, as he called him, looked as if he had seen a ghost. Melania, to whom Donald Trump had made his solemn guarantee [that he would lose], was in tears — and not of joy. There was, in the space of little more than an hour, in Steve Bannon’s not unamused observation, a befuddled Trump morphing into a disbelieving Trump and then into a quite horrified Trump. But still to come was the final transformation: suddenly, Donald Trump became a man who believed that he deserved to be and was wholly capable of being the president of the United States.”

Wolff was not there, he didn’t see this, he quotes no one who was or did, this is simply invented fantasy.

Wolff’s credibility is also stretched by his treatment of Trump’s attitude towards the U.S. intelligence community. He dismisses the antipathy between president and spy agencies as paranoia: “Deep state,” the left- and right-wing notion of an intelligence-network permanent- government conspiracy, part of the Breitbart lexicon, became the Trump team term of art: he’s poked the deep state bear.

By contrast, Trump’s campaign spokesman on foreign policy and (briefly) his national security adviser, Gen. Michael Flynn, had for years damned the Central Intelligence Agency uphill and down for its incompetence in the Middle East, blaming it for the rise of ISIS among other things.

As head of the Defense Intelligence Agency in 2012, Flynn released a now-celebrated report warning that U.S. intelligence de facto supported forces that wanted to establish a new caliphate, the future ISIS.

All of this was exhaustively discussed in foreign-policy specialist journals. Not only does Wolff fail to add anything to our knowledge of Trump’s wrangle with the intelligence community, but he suppresses the relevant facts already in the public record.

Wolff claims that Trump is stupid and that everyone around him thinks he is stupid, but there is little in “Fire and Fury” that has not already  been well-rehearsed in the media.

There has been a fair amount of back-of-the classroom giggling about who called Trump what. For Steve Mnuchin and Reince Priebus, he was an “idiot.” For Gary Cohn, he was “dumb.” For H. R. McMaster, he was a “dope.” The list went on. It’s all been said and denied, and said and denied again.

Finally, there is the matter of Steve Bannon, Trump’s campaign director and until August his chief White House strategist. Wolff quotes Bannon as saying that Donald Trump, Jr. was engaged in conduct that appeared “treasonous” by meeting with Russians who claimed to have derogatory material about Hillary Clinton. President Trump responded that Bannon after losing his job had “lost his mind.”

After several days of silence, Bannon has apologized, claiming that he was talking about Trump’s former chairman, Paul Manafort, who was fired after his dodgy connections to Ukrainian political figures came to light.

Evidently, Bannon did indeed talk to Wolff, and Wolff quoted him at length and to a great extent accurately — perhaps twisting his words to target Donald Trump, Jr. The whole business is painful for the public, and for me personally, because I consider Steve Bannon a friend.

One detail suggests that Wolff had far less access to Bannon than he claims. He writes: “Within the first week [of the Administration], Bannon seemed to have put away the camaraderie of Trump Tower —including a willingness to talk at length at any hour — and become far more remote, if not unreachable.”

Bannon may have been unreachable to Wolff, but not to a broad circle of advisers whom he found helpful. I advised Steve Bannon informally until his August departure and found him not only accessible but preternaturally quick to respond to emails and text messages.

He was interested in studies I had published in the Journal of American Affairs on American productivity and on how to compete with Asian subsidies for capital-intensive industries. The substance of what I discussed with him can be found in the linked articles. If Bannon was a “plotter,” as Wolff claims, I wasn’t read into any of his plots.

Steve Bannon is an exceptionally bright thinker with an unusual capacity to master complex material quickly, and is also in some ways a visionary, especially when it comes to media. It’s possible that Trump wouldn’t have won the election without his masterful use of social media.

I don’t share all of Steve’s views, but made a point of praising his realistic assessment of America’s military options on the Korean peninsula. Despite last week’s dust-up, I expect to hear great things from him in the future.

But no-one in a presidential administration is indispensable, except the president.  With Steve Bannon or without him, Donald Trump enacted a major tax reform and elaborated a new national security policy which I praise as tough but measured and well-crafted.  Dr. Norman A. Bailey,  my mentor during Ronald Reagan’s first administration, gave it high marks last week (1/04).

The man whom Michael Wolff portrays as a cheeseburger-gobbling, skirt-grabbing, television-addicted, ignorant and nearly illiterate clown has just pulled off one of the most successful first years of any U.S. president in history.

Who are you going to believe: Michael Wolff, or your own eyes?

David P. Goldman is renowned as “Spengler” for Asia Times Online; his latest book is How Civilizations Die: (And Why Islam Is Dying Too).