WHERE AN ANCIENT WONDER ONCE WAS 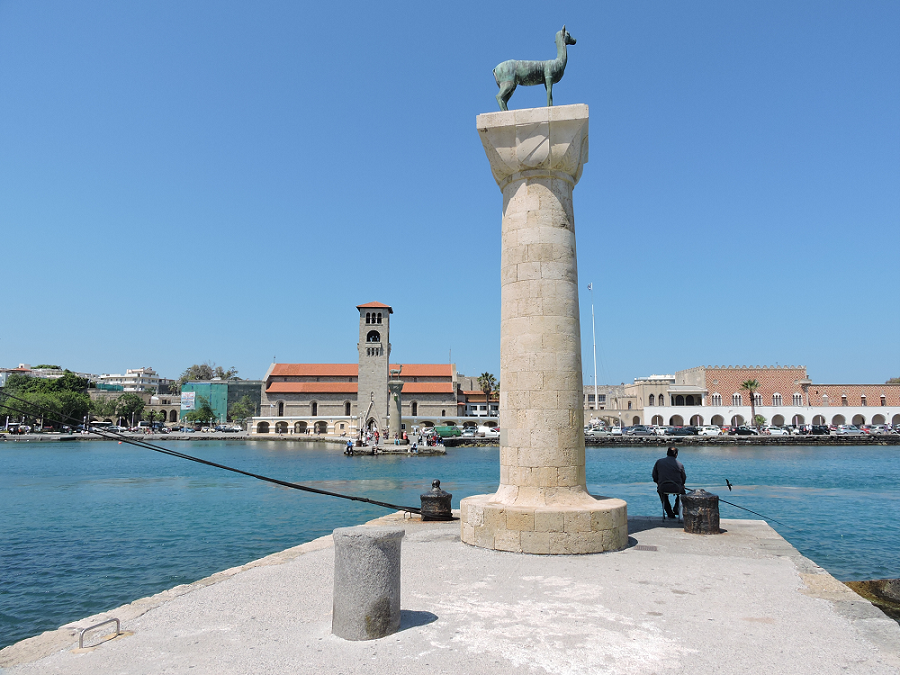 This is where The Colossus of Rhodes once stood, at the entrance to the Old Harbor of Rhodes.  Standing as high as today’s Statue of Liberty – 108 feet from feet to crown – it was of the Greek god of the Sun, Helios.  Completed in 280 BC, travelers from all over the Mediterranean flocked to see it – as they did all Seven Wonders of their world.

They marveled at the Great Pyramid of Cheops and the Lighthouse of Pharos at the entrance to Alexandria, both  in Ptolemaic Egypt; the massive Tomb of King Mausolus or Mausoleum at Halicarnassus and the Temple of Artemis at Ephesus, on the Ionian (western) coast of present-day Turkey; the giant Temple of Zeus at Olympia in mainland Greece; and the Hanging Gardens of Babylon – in addition to The Colossus on the Greek island of Rhodes, now still Greek right off the coast of Turkey.

The Colossus only stood for sixty years, and was then toppled by a great earthquake.  One by one, the others were destroyed by earthquakes, floods, fires and other disasters, until only one of the Seven is left – the Great Pyramid, already over 2,000 years old when the other six were built.

All seven sites where the wonders stood are worth visiting today.  We’ll be organizing such an exploration soon.  (Glimpses of Our Breathtaking World #132 Photo ©Jack Wheeler)