WHEN THE EPA WAS REALLY CORRUPT 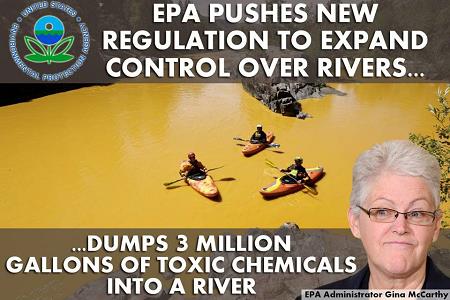 “The EPA is one of the most toxic places in the federal government to work. If you don’t get rid of the toxicity of the employees at the EPA, we are doing a great disservice to this country. I have serious questions about [the EPA administrator’s] ability to actually administrate.”

No, those remarks aren’t from one of EPA Administrator Scott Pruitt’s many critics on the Left.

Since official Washington is consumed with Pruitt’s every move, perhaps it’s time to take a little trip down pre-Trump Memory Lane—when all was right in the world, according to incurious elite media—and jolt the faulty memories of these hyperventilating talking heads and editorial boards who insist Pruitt should be fired for spending 50 bucks a night to rent a D.C. condo.

Gina McCarthy should share a place of ignominy in the Obama Hall of Shame, right alongside IRS commissioner John Koskinen, FBI Director James Comey, and Secretary of State Hillary Clinton.

Despite extensive evidence of wrongdoing and subsequent attempts to cover up one scandal after another, McCarthy mostly avoided harsh news coverage during her tenure from July 2013 to January 2017. (She barely won Senate confirmation following questions about her integrity and environmental activism.)

Chaffetz led a series of hearings in 2015 and 2016 detailing outrageous—and occasionally unlawful—behavior by EPA bureaucrats, and McCarthy’s failure to reprimand wayward employees.

McCarthy was a masterful blame-shifter who skillfully conned a gullible media into buying her excuses, an approach that started before Obama promoted her to EPA chief.

Example: After a top official embezzled nearly $1 million in bogus pay and bonuses while working for an EPA department McCarthy supervised, she blamed a colleague for her failure to act in a timely manner—a delay that permitted the plundering to continue for more two years.

She was at the helm of the EPA during two major environmental crises, the Gold King Mine spill and the Flint Water crisis.

McCarthy helped push one of the greatest bureaucratic overreaches of all time—the Clean Power Plan—which was so excessive that the Supreme Court stayed the rule in an unprecedented move by the court.

She spent nearly $750,000 on international travel in three years.

McCarthy was accused of permitting a workplace hostile to women, and particularly dangerous for young girls.

During one heated hearing, when McCarthy hid behind her usual “bureaucratese” to defend her failure to fire a known-predator at her agency, Chaffetz shot back, “I’ve got two young daughters. And I would never send them to the EPA, it’s the most toxic place to work I’ve ever heard of.”

Chaffetz also uncovered evidence that a convicted child molester “was on the EPA’s payroll for years, even after the EPA learned of this offense. The EPA knows that this person is a convicted child molester, and yet the EPA put him in a position to interact with the public. This person was found to have police sirens placed on his personal vehicle, lights and sirens, handcuffs, and a counterfeit badge.”

So, while the New York and D.C. media echo-chamber is stuck on repeat about Scott Pruitt’s travel costs and living arrangements, I’ll pop in a mix tape of McCarthy’s Greatest Corrupt Hits…

Causing the Gold King Mine spill:

In 2015, EPA workers destroyed a plug that was holding water at the abandoned Gold King Mine in Colorado.

Despite knowing the risk of a blowout (and subsequently covering up the fact they had that knowledge), the work continued at the abandoned mine until a breach unleashed three million gallons of toxic waste into the Animas River, polluting a waterway serving three Western states.

While McCarthy apologized for the disaster—calling it a “tragic and unfortunate incident”—her agency declined to accept full responsibility and attempted to deflect any scrutiny from Congress and the media.

Loretta Lynch’s Justice Department refused to prosecute the EPA employee culpable for the breach. (Sound familiar?) Nearly three years later, no one has been held accountable for the man-made catastrophe.

Here’s how the Heritage Foundation summed up the EPA’s actions surrounding the Gold King Mine spill: “[The] EPA has obfuscated, misdirected and lied to cover up what were at best implausible assumptions followed by reckless actions and then use of taxpayer dollars to hide the truth. So far, the bureaucrats responsible have gotten away with it.”

In April 2014, a state-appointed manager switched Flint’s drinking water source to save money.

Residents of the impoverished town soon started to complain about the new water’s color and odor: Testing showed it contained high levels of lead and other poisons in violation of the Safe Drinking Water Act. Although McCarthy’s EPA was first notified of the problem in April 2015, she did not declare a state of emergency until eight months later in January 2016.

That same month, the EPA’s regional director responsible for Flint resigned amid her failure to take immediate action or notify the public about the potential danger. But McCarthy upped her blame game, writing a whiny March 2016 column for the Washington Post saying,

“From day one, Michigan did not act as a partner. The state’s interactions with us were dismissive, misleading and unresponsive. The EPA’s regional office was also provided with confusing, incomplete and incorrect information. As a result, EPA staff members were unable to understand the scope of the lead problem until more than a year after the switch to untreated water.”

But her own agency’s inspector general report later contradicted McCarthy’s claims, concluding the EPA had “the authority and sufficient information” to act on behalf of Flint residents in June 2015.

There were several instances of McCarthy misleading Congress and flouting Congressional oversight.

In September 2015, Rep. Paul Gosar (R-Ariz.) and 20 Republicans co-sponsored a bill to impeach McCarthy over false statements she gave to Congress about the Waters of the United States proposal. Another flawed rule held up by the federal courts.

House Science Committee Chairman Lamar Smith (R-Texas), a frequent McCarthy critic, accused her of giving “misleading and contradictory” and “untruthful” statements about the EPA’s work on a highly-controversial report about a widely-used herbicide.

And around the same time Hillary Clinton was deleting 30,000 emails from her private server, McCarthy was deleting around 6,000 texts from her government-issued phone. (Smith subpoenaed them.)

Violating Federal Social Media Policies: The Government Accountability Office concluded in 2015 that the EPA weaponized social media to promote the Waters of the United States rule. The agency “violated publicity and anti-lobbying provisions” and “engaged in covert propaganda” by not identifying the EPA as the host of Twitter messages related to the rule.

Congressman Smith is not surprised by the media scrum against Pruitt. “They were top cheerleaders for the EPA’s extreme actions under [McCarthy’s] guidance,” Smith told me in an email. “Despite the embrace of the liberal media, who should champion open government, McCarthy’s legacy at the EPA is her repeated dismissal of transparency.”

Of course, it’s too late to go back in time and make the media apply the same standards to Obama’s EPA that they are imposing on Trump’s EPA. But that doesn’t mean none of it happened.

Of course, McCarthy hasn’t been punished in the slightest for her crimes and corruption  The Deep State rewards its own.  She’s now a tenured Professor of Public Health Practice at Harvard University.  (You did know Harvard is part of the Deep State, right?)