WHEN A 14-POINT REPUBLICAN LEAD DISAPPEARS 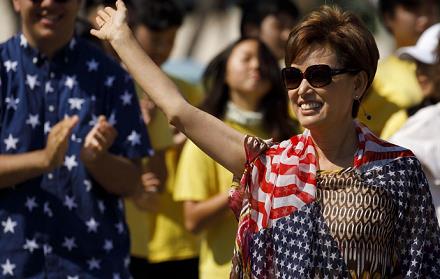 Young Kim was poised to become the first Korean-American woman elected to Congress.

Her 14-point lead was the lone bright spot on an otherwise dismal night for Orange County Republicans. But, over the past week, Republicans have watched the first-generation immigrant’s lead evaporate. With thousands of provisional ballots left to count, her commanding lead is now underwater. She lost one week after the election.

Non-Citizen Voting: California has expanded voter eligibility — with some communities granting illegal immigrants the right to vote. In 2016, San Francisco approved a measure that allows “people in the country illegally and other noncitizens the right to vote in a local election,” according to the Associated Press. This year, San Francisco spent $310,000 in tax dollars to register 49 non-citizens to vote in a school board election.

California law allows convicted criminals in county jails, on probation, on mandatory supervision, on post-release community supervision, or on federal supervised release to vote. Just about the only criminals barred from voting in California are felons in prison or on parole.

Felon Voting: Even California felons have been enfranchised, a side effect of California’s radical criminal justice experiments. By downgrading numerous crimes from felonies to misdemeanors, Proposition 47 has enfranchised tens of thousands of convicted criminals previously barred from voting while on parole.

The state’s prisoner early release program has also expanded the voter rolls. In 2015, 60,000 convicted felons officially regained their voting rights after the state refused to appeal a lower-court decision that would have denied them the right to vote.

Motor Voter Fraud: Every person in California that interacts with the Department of Motor Vehicles is automatically registered to vote. This has predictably led to tens of thousands cases of voter registration problems. The state’s Motor Voter program has come under fire for double registering and registering ineligible voters. The state’s bipartisan oversight agency expressed concerns about “serious problems with ensuring that the New Motor Voter Program works as intended and promised.”

In October, the Little Hoover Commission called for an independent audit of the program and warned that “voter confidence in a fair and legitimate electoral process will be undermined, if not shattered.”

16-and-17 Year-Old Pre-Registration: This cycle also marked the beginning of California’s pre-voter registration program for 16- and 17-year-olds. Of course, if every voter is automatically registered through the Motor Voter program, why would anyone need to pre-register?

Pre-registration is a thinly-veiled effort to capture voters while they’re young and more likely to identify as liberal Democrats. Of the nearly 89,000 minors that participated in the program, only 10 percent registered as Republicans.

Beginning in 2020, every county in California except one will be allowed to follow suit. Outrageously, Democrats carved out a special exception for Los Angeles County, where they maintain a significant advantage in voter registration numbers.

In just four years, the number of absentee ballots distributed in California has increased by 44 percent. “Nearly 13 million voters have received a ballot in the mail, compared to just 9 million in the last gubernatorial election in 2014,” notes Paul Mitchell, vice president of Political Data Inc.

Ballot Harvesting: It’s illegal in most states. But not California. As if it wasn’t enough for every person to be automatically registered to vote and receive a ballot, Democrats have made it easier for their campaign operatives to collect those absentee ballot. Also in 2016, state lawmakers eliminated the ballot protection law that enabled only a trusted family member to return another voter’s ballot.

Assembly Bill 1921 now allows anyone to return an absentee ballot. The law has encouraged campaign operatives to engage in coercive tactics. One Democrat voter described coercive intimidation tactics employed by a Democrat campaign in a 2017 special election, leading even the liberal Los Angeles Times editorial board to criticize the law.

Ballots Accepted Up to Week After Election Day: In California, voting doesn’t stop on Election Day. Absentee ballots need only be postmarked by Election Day, with ballots counted that arrive up to three days late. If ballots are sent to the wrong county, the ballot is valid for an additional four days. As Mr. Mitchell points out, “That means you literally have seven days after an election where a county could still be receiving legitimate ballots.”

Second Chance for Rejected Ballots: Just 50 days before the election, Democrats snuck in one more change to the state’s absentee voting laws. In September, Gov. Jerry Brown signed into law Senate Bill 759, which requires elections officials to notify every voter whose ballot was rejected due to a mismatched signature.

This election, a 14-point lead wasn’t enough for a Republican victory. By 2020, a 20-point lead on Election Night won’t be safe.