WHAT’S IN STORE FOR RUSSIA 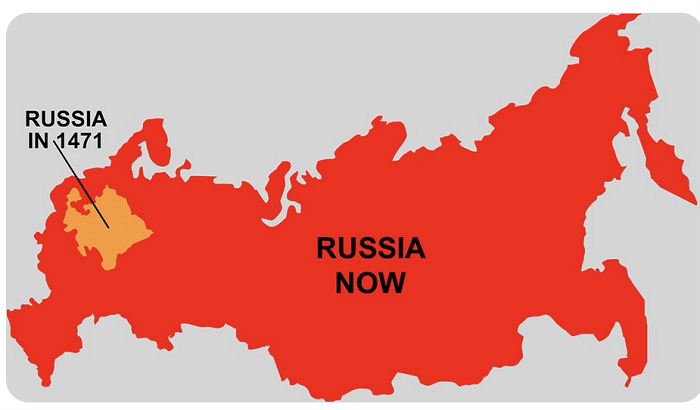 Back to the Principality of Muscovy?

[Note by JW:  The author, Jacob Fraden, is a very interesting fellow.  Born and raised in Sverdlovsk (now Ekaterinburg) in Russia’s western Siberia 77 years ago, he earned his Ph.D. in Biomedical Engineering at Ural Polytechnic there, and was able to escape the Soviet Union to America in the mid-70s. He has dozens of patents for medical inventions such as the Thermoscan Instant Thermometer, and has authored major textbooks plus autobiographies (one in Russian, the other in English).  This is a brilliant Renaissance man, and I encourage you to regard what he writes very seriously.]

Russia’s bloody and senseless war against Ukraine has been going on for almost six months. Instead of the original goal of quickly seizing Ukraine and turning it into a puppet state or a province (the name “Ukraine” is derived from the Russian word for “outskirts”), Russia has suddenly encountered an impenetrable wall of resistance.

Two questions logically arise: 1) why did Russia attack Ukraine? and 2) how and when will the war end?

Today’s Russia is the heir to two political formations: feudal and then capitalist tsarist Russia, which died in 1917, and the communist Soviet Union, which lost the Cold War and disintegrated in 1991.

Throughout its millennial history, the Russian Empire and its successor, the Soviet Union, have always aimed at expanding their territory at the expense of foreign lands and establishing control over other countries. At the same time Russia never paid the slightest attention to the development of its internal infrastructure and improving the lives of its people.

Hence the popular Russian saying: “There are only two problems in Russia: bad roads and fools, where the fools tell people which road to take.”

In the peasant country of Russia (until the mid-16th century it was called Principality of Muscovy) there has always been slavery (serfdom): from 11th century till 1861 under the princes and tsars, and then under Bolsheviks from 1928 to 1974.

A slave does not want freedom, a slave wants others to become slaves — this miserable idea is engrained into the flesh and blood of the Russian people. They are very tolerant, obedient and ready for endless deprivation and suffering — if only “not to get worse.”

For its ability to tolerate any misery, Russia cannot be defeated from the outside, especially since it has nuclear weapons. The good news is that under certain circumstances (as discussed below) it can slowly decay from within, dying on its own without external force.

Of course, there is always a small number of active selfless people who want change, but their activity under the Soviet rule and in our time has been brutally suppressed with the silent approval of the masses.

The level of repression under Putin can only be compared to that of Nazi Germany. For example, the invasion of Ukraine is ordered to be called a “special operation,” and anyone who uses the word “war” is arrested and sentenced to up to 15 years in prison.

Russia’s ruling elite is used to living by imitating the West and enjoying imported things. Just two hundred years ago few of the Russian nobility knew Russian language (they spoke French or German), and absolutely all quality objects, from clothing, to weapons, to machines for factories, were imported from Europe.

In the 1930s, almost the entire heavy industry of the USSR was built by the American firms. One could say that Russia has been embedded into the world economy for centuries: it exported raw materials and imported everything else.

Today, Russia produces no manufactured goods (except old-fashioned weapons) and is completely dependent on the import of end products.

A few years ago I was invited to give a lecture on modern electronics at a Russian university, my alma mater of Ural Polytechnic in now re-named Ekaterinburg. During my presentation I noticed the total indifference of the students: no one took notes, they yawned, looked not at the slides, but at the ceiling, etc.

After the lecture, everyone left without asking a single question — and these were the grad students from the radio-electronics department! I asked my friend, the head of the department: “Weren’t they interested? Maybe they didn’t understand?”

He answered: “They did not want to understand! The main idea for them is to get a formal degree as quickly as possible and become officials, so they could live happily off bribes.”

That same evening my former classmates (all in our early seventies), whom I had not seen for almost half a century, invited me for a dinner. I asked: “Guys, how do you live in your retirement?”

They laughed: “What retirement? The authorities don’t let us retire. We work at the military plants that still produce weapons developed in the 60’s and 70’s of the last century. We know the designs in and out, so we can maintain the production, but there’s nobody to replace us…”

“And what about the young university graduates?”, I asked.

“You saw those graduates at your lecture today, they are completely ignorant and know nothing.”

“So, what will happen when you are gone?”

After the collapse of the USSR, tens of thousands of highly qualified specialists left the country forever and now the scientific and technical level in Russia is extremely low. The Russian propaganda about “hypersonic” rockets, “nuclear-powered” airplanes, and other fantasy projects is nothing more than fairy tales to be fed to its own naïve population.

Russia has lagged behind other developed countries by at least half a century and there is not the slightest chance of catching up.

Russian soldiers are fighting in Ukraine with outdated weapons, 50-60 years old, whose effectiveness is not comparable to those supplied by the US, UK and other countries. Nevertheless, they have a huge stockpile of the old-fashioned weapons, and until it runs out, Russia will fight.

Everything that Russia has done during its entire history was with a gigantic waste of resources, both human and material, and that is how Russia achieved its goals. Yet, it won’t work like that this time: no American lend-lease, no powerful allies. India, Iran, or North Korea don’t count, nor does China, just waiting to feed on Russia’s carcass.

The massive sanctions imposed by Western countries certainly have had a strong impact on Russia’s ability to produce weapons, but the sanctions have had only a small effect on the mood of ordinary people accustomed to patience and obedience.

If cars disappear from the market, Russians will ride horse-drawn carts. If there are no smartphones, they will use landlines.  If wires disappear and there is no paper for letters, they will write on birch bark, like 500 years ago — if only “not to get worse.”

Alas, “worse” for this people has no limit. The Russian people will tolerate anything and swallow any propaganda garbage.

No totalitarian state can live without an ideology. In the USSR, it was the communist ideas of Marx. Later it became clear that Marxism everywhere had failed repeatedly and miserably (which, incidentally, does not prevent the American left and other “progressives” from flirting with Marxism).

Under Putin, instead of Marxism, a militaristic ideology based on megalomania has been adopted: “We are the strongest, the most spiritual, the most invincible, everyone is afraid of us!” The country launched mass military hysteria at all levels, from kindergartens to universities.

However, this could not go on indefinitely; the intense militaristic heat grew and demanded a vent — Russia needed an enemy which could be attacked and defeated with impunity “with little blood and on foreign soil” (the same slogan as Stalin propaganda used before WW2).

The role of the enemy was assigned to Ukraine, the hatred for which Russian propaganda furiously and unabashedly built up after the seizure of Crimea in 2014. As soon as Covid was removed from the agenda, war with Ukraine became inevitable.

When the “blitzkrieg” that began on February 24, 2022, completely failed, the purpose for the war urgently had to be modified; now the purpose of the war is the war itself. No longer does Russia need to conquer Donbass or Kiev — all it needs now is a permanent war.

And the longer it lasts, the better for Putin’s regime. There is simply no other way for Putin or his cronies to survive: they are no longer able to leave their positions and retire or escape to other countries.

Their situation is utterly hopeless — even in the event of a hypothetical victory over Ukraine, Russia will inevitably collapse, for being under sanctions, its economy will not be able to support occupation of the second largest geographical European country.

War is the only “glue” that can hold Russia together for a while. In reality, there is not the slightest chance for Russia to permanently defeat Ukraine. Even a small victory over a single area, if it happens, would only be temporary.

Therefore, for Putin it’s absolutely impossible to end the war — leaving Ukraine without victory means admitting defeat, which his own comrades-in-arms will not forgive. If Putin cannot end the war, then the war must end Putin.

The war can come to an end only with a complete victory for Ukraine and the end of Putin. I mean the physical end of him. During the entire history of Russia and the USSR, with few exceptions, their leaders have not died peacefully in their beds. Their end typically was violent.

When might this happen to Putin? I am not Nostradamus able to predict the future, but based on what we roughly know about Russia’s weapons reserves, its ability to recruit soldiers, and the rate of which Ukraine is accumulating advanced precision weapons, it seems to me that the end of Putin and his regime, with a complete expulsion from the Ukrainian territory, could occur within the next six to twelve months.

What will happen after Ukraine’s victory? It makes no sense to compare Russia to Germany or Japan after their defeat in WW2. Those countries were conquered, and the entire population was forced into “reeducation”. That process took about 20 years, the life span of one generation.

After the Exodus of Jews from Egypt, Moses led his people to wander through the desert for 40 years — the life span of two generations. He wanted the former slaves to lose their slave mentality and to give birth to a generation of people with a free spirit.

No one is interested in conquering Russia and no one will forcibly reeducate the Russian people. They must do it themselves. Without the external pressure, a self-reeducation may be much longer than 40 years.  The bitter path of decay and disintegration and then repentance may take as long as a century.

In the future, Russia (if that name is kept) will inevitably have to be reborn on its own, so that the slave genotype disappears and a new freedom-loving and civilized nation emerges. Let us hope so.

Jacob Fraden is a retired inventor and entrepreneur in San Diego, California.  He has been a US citizen for the past 40 years.