WELCOME TO THE BANANA REPUBLIC OF FLORIDA 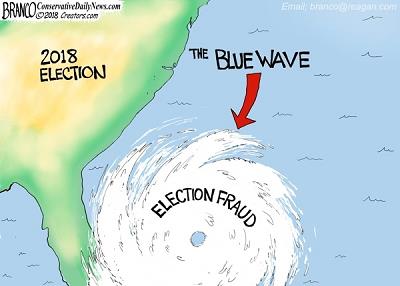 Considering what’s going on for the umpteenth time in the República Bananera de Florida, the caravans of how many thousands making their way from Central America to our Southern border should be going in reverse.

No Banana Republic — past or present — could really outdo Florida when it comes to electoral corruption.  After all, the population of the Sunshine State is roughly the same as the populations of Honduras, El Salvador, and Nicaragua combined.  It’s also larger than the population of Guatemala by itself.

Too bad Garcia Márquez is dead and can’t write another novel like One Hundred Years of Solitude to describe life in Florida as he did of Colombia when it was hugely corrupt. He could win a second Nobel Prize.  (Yes, I know the author was a Castro crony, but nobody’s perfect.)

So who’s responsible for this nauseating state of affairs?  The Democrats, no surprise, behave as if Boss Tweed were reincarnated in Miami Beach, bringing down their best Fusion GPS lawyer from the Perkins Coie mafia of Trump dossier fame to oversee the recount.

As long as you’re on the “correct” side of things, by any means necessary, right?

But the GOP hasn’t got clean hands either. Rick Scott and his fellow Republicans cry foul when the election supervisors of Broward and Palm Beach counties act in a manner that would make Mayor Daley blush, but aren’t they a little late?

Where have these GOP pols been for the last several decades?  This is nothing new.  Voter irregularities are as common in Florida as hurricanes — and probably more toxic in the long run. Why, for godsakes, does the woman in Broward still have that job?

Scott’s been the governor for quite a while.  Shouldn’t he have done something about this long ago?  Don’t they remember the famous quote attributed to Stalin — even though it may be apocryphal, it’s true — “It’s not the people who vote that count. It’s the people who count the votes“?

Which brings us to a larger question. It’s not just Florida.  Voting in this supposedly great democratic republic of ours is a national disgrace.  A country that put a man on the moon nearly fifty years ago can’t invent a foolproof voting machine?

Something’s wrong here — and it’s most likely deliberately wrong.  Too many people don’t want to get it right. It may be the old story of the Evil Party and the Stupid Party.

And besides the failure to employ foolproof machinery, voter registration is riddled with fraud in many areas.  The Election Law Center has labored mightily against this, but they often seem to be fighting uphill or, more disturbingly, alone.

One of the more insidious ideas on the part of some is that you shouldn’t need a verifiable state-issued ID to register.  These same “progressives” would have a fit if they learned their next airplane flight took such a laissez-faire approach, but that’s the way things are nowadays.  Hypocrisy is pro forma.

Speaking of which, it’s also despicably racist to assume blacks and Latinos are too inept or clueless to obtain IDs. This is just the tip of a particularly depressing ice berg.

A lot of digital ink has been spilled in the last two years on the putative influence the Russians, Chinese and even the Iranians have had on our elections.  Whatever the impact of all this, it’s almost meaningless unless we have real election integrity of our own. Might as well give them free rein.  Maybe Putin could run the machines for us.  It’s cheaper.