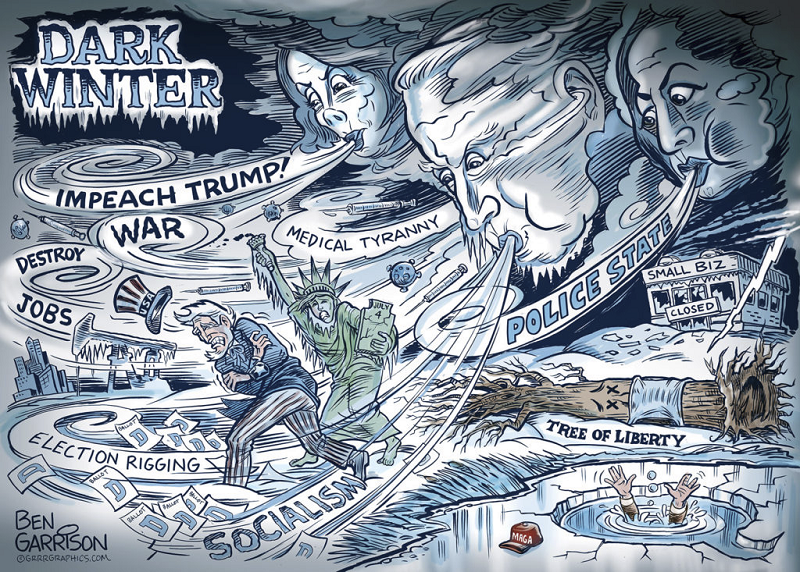 Two weeks into the [FPX] administration and already the prospects of restoring the American spirit, the economy, and the old Constitution look bleak.

In a flurry of executive orders, the new faux-president—superannuated figurehead though he is—has sought immediately to overturn the legacy of the Trump administration on such matters as border security, immigration, and energy self-sufficiency.

And that’s just for starters.

“Make America Great Again” has become “Make America Grovel Again.” Which is, of course, exactly the way the punitive, “progressive” left wants it as it goes about refashioning the country along the lines of its own fascist antecedents.

It seems that the end of the American Experiment now looms—to be replaced by what, remains to be seen, although history offers us a frightening clue.

But since the liberal legislative program of the mid-1960s established itself as the successor to the constitutional republic we once enjoyed, the nature and character of the United States has fundamentally changed. And don’t the “progressives” know it.

For one thing, the freedom of association guaranteed by the First Amendment has been effectively negated in favor of a victimhood-based definition of rights, ever growing and all-encompassing.

As Christopher Caldwell argues in his new book, “The Age of Entitlement,” the Civil Rights Act of 1964—a law regarded by liberals as their crowning achievement—has become a “second constitution,” creating an omnivorous federal Leviathan legally (if not morally) permitted to stick its snout into every area of human behavior, and to regulate it under the rubric of neo-Marxist political correctness.

The result hasn’t been the expected social harmony and the internment of the sins, but renewed grievances and conflict, much of it explicitly fanned by various metastasizing governmental agencies.

The law of unintended consequences was similarly observed in the Immigration and Nationality Act of 1965, which greatly reduced immigration from Europe in favor of what was then known as the Third World—Asia, South America, and Africa. “It will not upset the ethnic mix of our society,” promised [lied] Ted Kennedy, the bill’s floor manager.

Today, as the United States changes from a majority-European nation into something else, the country is unhealthily obsessed with race and ethnicity, with the insulting term “white supremacy” now being thrown around with impunity as statues tumble without consequence and murder rates skyrocket.

Like the Reagan administration before it, the Trump administration was an attempt to reject collectivization, restore the primacy of the individual—the bedrock principle upon which the country was founded—and reduce the scope and power of the state.

And what a slide it’s been. Under today’s radical Democrats, the notion of “equality,” in the sense of opportunity, has been replaced with “equity,” in the sense of material goods or wealth; the power of the state to dole out and enforce that “equity” can only grow and become more intrusive.

“Victimhood” has transmogrified from a regrettable happenstance into a proof of moral superiority, one marked by a deep-rooted resentment against aptitude, accomplishment, and achievement. The remedy for perceived imbalance is now called “social justice.”

But if justice requires a modifier, it isn’t justice but revenge, and that requires the overthrow of the dispassionate rule of law and its replacement by a vengeful one-party state, quasi-dictatorship.

Now that dissent is no longer the highest form of patriotism, the left’s sanguinary lust to transform the country-as-founded into an especially pernicious form of National Socialism along the Italian and German models of a century ago will only increase.

This is why they bandy about the word “Nazi” so freely these days, because they know it more correctly describes them, and are attempting to escape its taint by forcing it onto their political opponents.

Civil unrest, retributive “justice,” confiscation of property, an unholy alliance between the government and big business (Krupp and Thyssen in the 1930s, Google and Twitter today)—all these things are emblematic of fascism, and every one of them now marks the United States of America.

Try as they might to deny it, though, the left has deep roots in fascism. Until the outbreak of World War II, Italian fascism had many fanciers among the Democrats, not the least of whom was Franklin D. Roosevelt as he took office in 1933.

With capitalism apparently having failed spectacularly in both the United States and Europe, there was a great deal of affinity among Roosevelt, Hitler, and Mussolini: “Throughout the ’30s, intellectuals and journalists noted areas of convergence among the New Deal, Fascism, and National Socialism,” wrote the German cultural historian, Wolfgang Schivelbusch in his 2007 book, “Three New Deals.”

Later, Roosevelt was notoriously chummy with the international socialist “Uncle Joe” Stalin as they prosecuted the war against what the Germans themselves called the National Socialist State (NS-Staat).

In fact, just after FDR’s first inauguration, a New York Times reporter noted that the mood in Washington was “strangely reminiscent of Rome in the first weeks after the march of the Blackshirts, of Moscow at the beginning of the Five‐Year Plan. … America today literally asks for orders.”

And orders is what [FPX] is handing out—more than 40 since taking office on Jan. 20. The ukases deal with such things as the “climate crisis,” eliminating private prisons, allowing transsexuals to join the military, and various COVID-19-related issues.

“Stroke of the pen, law of the land,” chortled former Clinton apparatchik Paul Begala back in 1998. “Kinda cool.”

Naturally, there’s been to no fretting about “our democracy,” no fuss from the media robinettes over [FPX]’s rule-by-decree, and barely any pushback from the federal judiciary, which under President Donald Trump had rarely if ever seen an executive order it didn’t want to enjoin nationwide within 24 hours.

But, hey, it’s mourning in America again, and who has time for the old-fashioned notion that Congress writes the laws and the president executes them assuming they pass constitutional muster?

Every trace of the hated Trump must be expunged, his orders overturned, his bank accounts closed, he and his followers de-platformed by the tech giants and hounded into either penury or jail, and preferably both.

After four years of screaming that the 2016 election was stolen by Trump and the Russians, Democrats now demand that the electorate must affirm that there wasn’t a scintilla of fraud last November, and that what the country now needs is not only unity but unanimity—by any means necessary.

What are you, anti-American to not agree?  Welcome to Fascist America.