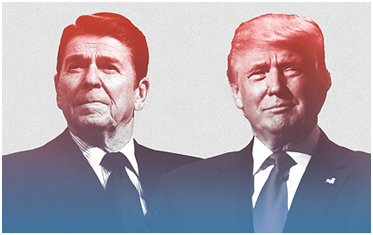 I love maps.  Even though you may not, you are about to see a map that will make your jaw drop to your breastbone.  But first a story.

It was January 21, 1981, in the Cabinet Room of the White House with its windows looking out upon the Rose Garden.  Having been inaugurated President the day before and 12 of his 14 Cabinet-designates already approved by the Senate, Ronald Reagan convened his first Cabinet meeting.

When the topic of the Soviet Union came up, Secretary of State Alexander Haig mentioned that US policy towards the Soviets since the onset of the Cold War in 1947 had been one of “Containment” (formulated by George Kennan).  Reagan responded, “Not any longer.”

There was a quite pregnant pause of silence.  Then National Security Advisor Richard Allen asked, “Mr. President, what do you think our Soviet policy should be?”

Reagan looked at him directly in the eye.  “Well, Dick,” the President of the United States replied, “how about, ‘We win, they lose’?”

The former was very far from a foregone conclusion in 1981, and so is the latter now.  It can take a long time to overcome massive inertia.  I spent a while researching and formulating how to put Reagan’s directive in action under the concept of “The Soviet Union is Humpty-Dumpty.”  This was first put into publication in Reason Magazine in November 1983:  How to Dismantle the Soviet Empire.

It wasn’t until after I had spent two years (1983-84) with anti-Soviet insurgencies that President Reagan announced what the press was to call “The Reagan Doctrine” (we just called it FTC) in his State of the Union Address on February 6, 1985.

Reagan’s strategy to win the Cold War was not only fanatically resisted by most Democrats (the most heroic exception being Charlie Wilson), but within his own White House and State Department.  How Reagan overcame the frantic objections by StateSec George Schultz to the most immortal line of his presidency – “Mr. Gorbachev, tear down this wall” – is told here.

In speech after speech year after year to various conservative groups, I described the structure of the Soviet Empire as brittle.  Something brittle, say a drinking glass, can remain stable for a long time, but if the right stresses are put on it, one moment it remains stable as always, the next moment it shatters in pieces never to be put back together again.

Thus, I predicted that if the right stresses are put on the Soviets, what seems impossibly undefeatable now can be shattered – and what’s more, it will be the speed with which this happens that will stun the world.

I remembered the last time I gave this talk, at the Heritage Foundation in May 1989.  I predicted the Berlin Wall would be down in less than a year.  The audience, composed of hundreds of conservatives, laughed, thinking that was ridiculous.  I said, “You folks can laugh all you want.  No problem.  I only ask that you remember that here, in May 1989, I said that.”

Today, our beloved Jack Kelly – who continues to fight and win against his battle with cancer – wrote The Second Civil War Has Begun.

The war is being waged by the Fascist Left, from Chuck U. Schumer in the Senate to the thugs of Only Black Lives Matter.  All their efforts, from Capitol Hill to the Violent Left trashing the UC Berkeley campus and burning limos in Washington DC, have a deafeningly loud Lying Swine Media megaphone.

So let’s talk about how this war can be won – and quickly.  More quickly than it took Reagan to collapse the Soviet Union.

The first necessity is to grasp we really are in a war to the death with an implacably evil enemy – just like the Soviets who believed their Leninist morality of The-Ends-Justify-The-Means justified any lying, cheating, and violence to destroy us.

That being the case, we get to play the game like Paul Newman fought a knife fight in Butch Cassidy and the Sundance Kid:

That is, the Fascist Left needs to end up like Harvey.  How do we do that?  Not physically – although that certainly is necessary when you’re physically assaulted (be sure you’re concealed packing and know what to do).  But aside from individual instances, it means kicking the Left in the cojones of their minds.

The most marvelous new word to describe Lefties today is Crybully – e.g., “A SJW (Social Justice Warrior) or other type of far-left extremist that constantly pretends to be a victim while actually doing things such as harassing, bullying or even using violence against others.”

SJW crybullying works, like against college administration pussies – until it runs up against someone it can’t intimidate.  That someone is the current President of the United States.

The reason the Fascist Left has an unhinged hate for Donald Trump is that they can’t intimidate him.  Rather than capitulate, he will fight back and do whatever it takes to shove their intimidation straight up their sigmoid colon.

Like all bullies, once this happens, once they fail to intimidate, they lose their steam, their faux confidence.  One minute they’re full of righteous anger juice, sturm und drang, the next they’re fetal under the stairs.

This is happening right now before our eyes in the Senate.  Who’d a ever thought that Orrin Hatch (!) would have the spine to publicly call the boycotting Dems on his committee “a bunch of juvenile idiots” and blithely change the rules to get Trump’s nominees a floor vote?

Trump gave him the spine, just like he gave it to McConnell to shut up Fauxcahontas.  Just like he’s going to give it to parents who won’t stand for their kids being intimidated for wearing a MAGA cap, or people in companies who won’t stand for Zampolits (Commie political officers) in HR anymore — “I’m tired of this crap,” they’ll say just like Orrin Hatch said.

Thus we get this cover of the current issue of TIME Magazine: 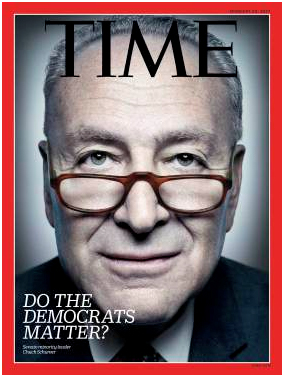 The answer is – No, they don’t and they know it.  As the headline says in yesterday’s WaPo (!), Can Democrats get used to all the losing that lies ahead?  The answer is – who cares?  They no longer matter.

The Senate Dems are the canaries in the Left’s coal mine. It’s easy pickings after that.  For why, here is that jaw-dropping map I promised at the outset: 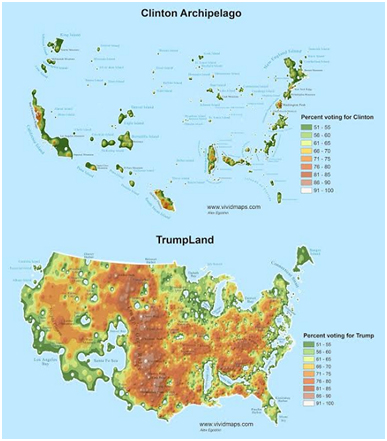 As you can see, the Fascist Left is concentrated in scattered pockets – which can be targeted by tactics suggested by Jack Kelly and more.  The Left’s “Civil War” conducted from these pockets waged against TrumpLand is a hopeless lost cause.  What we have to do is make sure the fascisti keep losing it.

Trump once memorably said during the campaign that, with him, we’ll win so much we’ll get tired of winning.  Very funny, because of course as he and we know, we won’t.  The obverse is that, with Trump, the Left we’ll lose so much they’ll get tired of losing.  Tired enough to give up.

That’s what happened to the Soviets.  That’s what we must make sure what happens to Fascist Lefties.  “We win, they lose.”  It was Reagan’s mantra.  Now it is ours.  And with it, and with Trump, the Left will shatter like the USSR into pieces.  Quickly.  The quicker the better.  Saddle up.