WE NEED A WALL THAT CAN STOP A TIDAL WAVE 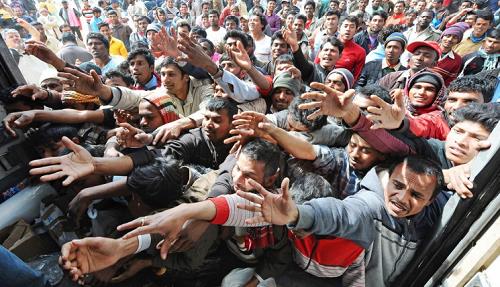 According to the Office of the UN High Commissioner for Refugees, 68 million people around the world are or at risk of becoming refugees.

The migration of a few million people has already turned the European Union inside out and motivated the election of an America-first presidency. What we have seen so far, though, is nothing compared to what is to come.

Fertility is declining in almost all the educated and prosperous parts of the world, notably including East Asia. But it remains extremely high in the least-educated parts of the world with the worst governance and the poorest growth prospects. 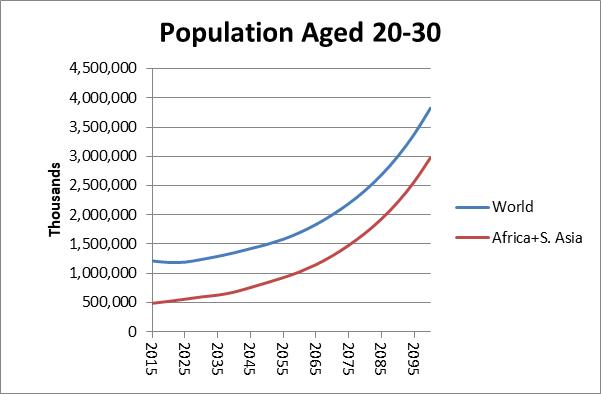 At constant fertility, the number of people aged 20 to 30 years will grow from 1.2 billion to almost 4 billion over the present century, and all of the growth will occur in Africa and South Asia (notably in Pakistan, where total fertility is 3.6 children per woman vs. 2.4 in India). Africa will be the main source of new young people.

At least 5,000 Africans died during 2016 crossing the Mediterranean to Europe. According to Frontex, a half-million attempted the crossing last year, and the United Nations estimates that 2 million have done so since 2014.

Writing in The New Republic, Laura Markham reports that a trickle of “extra-continental refugees” is infiltrating the United States via Brazil, and that this trickle is likely to turn into a flood:

“Because of the high risks of crossing and the low odds of being permitted to stay, more and more would-be asylum-seekers are now forgoing Europe, choosing instead to chance the journey through the Americas …

Each year, thousands of migrants from the Middle East, Africa, and Asia make their way to South America and then move northward, bound for the United States — and their numbers have been increasing steadily.

It’s impossible to know how many migrants from outside the Americas begin the journey and do not make it to the United States, or how many make it to the country and slip through undetected. But the number of ‘irregular migrants’ — they’re called  extra-continentales in Tapachula — apprehended on the U.S. side of the border with Mexico has tripled since 2010.”

“The largest groups tend to be from India, Pakistan, China, Bangladesh, Nepal, and Congo — demographics that do not, or  likely would not, fare well in European immigration courts — but others come from Iraq, Afghanistan, Eritrea, and even Syria, too. Their first stop is most often Brazil, which has a favorable reciprocal visa law.”

From Brazil the migrant stream works its way through the jungles of Panama to Central America, and through Mexico to the United States.

Africa can’t absorb its rapidly growing population. The World Bank estimated in 2014 that between 1993 to 2008 the average per capita income of sub-Saharan African economies barely budged — it increased from $742 to $762 per year (measured in 2005 purchasing-power parity-adjusted dollars).

Africa retains the fertility behavior of pre-industrial society, with an average of five children per female, but lacks the infrastructure, education, and governance to absorb them into economic life: 64% of sub-Saharan Africans live on $1.90 per day or less.

The problems of sub-Saharan Africa (as well as Pakistan and other troubled countries) are physically too large for the West to remedy: The sheer numbers of people in distress soon will exceed the total population of the industrial world.

That means that there is a point in time at which the most devout pussy-hat wearing, virtue-signaling, politically correct liberal will pretend not to notice millions of starving children dying before his eyes.

President Trump’s reported bleephole comments about certain countries as sources of prospective immigrants may sound callous. He simply is ahead of the curve. The hour is already late to put a merit-based immigration system in place with effective enforcement against illegal immigration.

Mexico solved its economic and social crisis of the late 1970s and early 1980s by exporting the poorest fifth of its population to the United States. With no prejudice to the Mexicans who chose to migrate, it is understandable why Americans feel put on. But that is tiny compared to what is headed towards us ten, twenty, or thirty years from now.

The mass of human misery headed towards the industrial countries simply is too great for us to bear. It is hard to see how humanitarian catastrophes of biblical proportions can be avoided. The responsibility of an American president is to make sure that they don’t happen to us.

David P. Goldman is renowned as “Spengler” for Asia Times Online; his latest book is How Civilizations Die: (And Why Islam Is Dying Too).