WE ARE CLOSE TO SOMEONE IN THE TRUMP CIRCLE BEING MURDERED 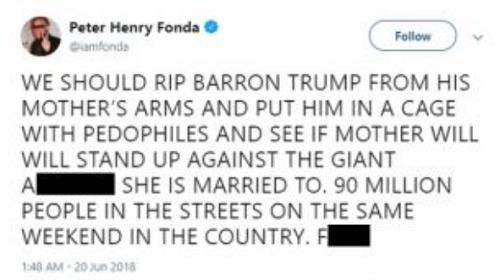 Does someone from the Trump family, the Trump Cabinet, or even the Trump administration have to be assaulted or worse, killed, before we accept the fact that a growing number from the far-left have put a rhetorical bounty on their heads?

If has-been actor Peter Fonda suggesting Barron Trump be “ripped from his mother’s arms and put in a cage with pedophiles” does not horrify you with the obscene brutality of its message, nothing ever will.

From this cauldron of bubbling and putrid hate filled from the twisted minds of enraged liberal politicians, “journalists,” entertainers, and academics, spews forth the dangerously deranged like Fonda who have proven there is no line they will not cross to inflict “punishment” and harm upon anyone connected with President Trump.

Beyond the terrifyingly rhetorical, is the real.

Anarchists from the Democratic Socialists of America just confronted Kirstjen Nielsen — only the head of the Department of Homeland Security entrusted with the massive job of protecting us all — in a restaurant in Washington, D.C., and forced her to flee.

They assailed her with her full security detail around her.  Let that sink in for a second.

These anarchists not only surrounded the Secretary of Homeland Security at her table, but simultaneously put the word out for more support.

The election of Donald Trump has so poisoned and completely unhinged the minds of many on the left, that rational and respectful debate is no longer possible.

They view the norms of society and civility as a weakness to exploit.

At least until the liberals who control Google, Facebook, Twitter and YouTube delete them to shield and excuse the lawlessness of those they ideologically support, there is example after example of these far-left zealots wishing and inciting violence against conservatives, Republicans, Christians, and invited speakers on campus as rage fills their eyes and spittle literally flies from their mouths.

Don’t take my word for it. Search for it while you can.

Beyond cowardly threatening a little boy in the White House (he later deleted the tweet and apologized for it), Peter Fonda is now encouraging the deranged to find out which schools the children of U.S. Immigration Agents attend so they can be terrified.

Aside from celebrities desperate for attention, the anarchist group Antifa is putting out the names, photos and addresses of ICE Agents to deliberately put their lives at risk.

These vile attacks and threats are hardly new.

Ivanka Trump and her children were not only confronted on an aircraft but then followed and harassed through the airport terminal.

EPA Administrator Scott Pruitt has been continually harassed, screamed at and even threatened in public and on aircraft.

Secretary of Education Betsy DeVos has been chased, screamed at in a restaurant and forced to turn back from events by enraged protesters.

It is only a matter of time, before these anarchists cross the final line.

Should that tragic day arrive, the blame will lie in large part with the liberal mainstream media, the entertainment community, irresponsible celebrities, academics, and the Democrats.

They not only unleashed these sick minds upon society with their own twisted anti-Trump diatribes, but condone their actions with their collective silence.

We are on the verge of someone in the Trump circle being murdered.

Douglas MacKinnon is a former White House and Pentagon official. This was published in today’s (6/21) Investors Business Daily.