2 The Point News » Guest Authors » Members Only » WAS IT EVER REALLY ABOUT THE VIRUS?

WAS IT EVER REALLY ABOUT THE VIRUS? 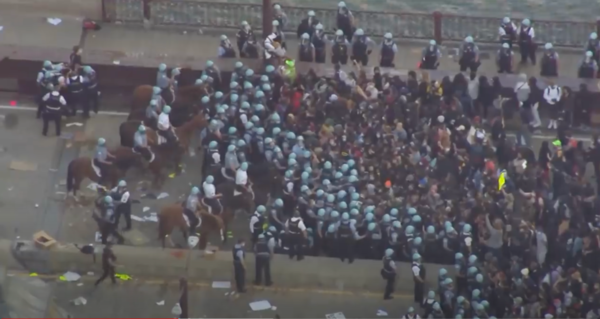 What happened to social distancing rules in lockdown cities?

We have heard about ventilators and ICU beds, social distancing and masks, death counts and vaccines, all to the point of over-saturation. Fox News ran a nearly constant death count side bar and CNN blamed the virus, the resulting economic shutdown, and every other bit of trouble in the world on their least favorite president ever.

Only those in a coma or living in a Siberian cave weren’t aware of the Chinese-Chicom-CDM virus and the havoc it brought to not only America but also to the rest of the world. Digital media provided confirmation.

But suddenly it all stopped.

Coronavirus has been the most searched term on Google in 2020. Suddenly, for the last several days, three-quarters of the top trending Google searches relate to the country-wide riots over the death of George Floyd. Virtually no searches of the Chinese coronavirus.

Twitter provides another barometer. Of the top trending Twitter topics for these days noted above, a third were tied to the riots, but nothing regarding the Wuhan flu.

How could such a black swan event disappear from the news so quickly? This is another example of Rush Limbaugh’s “drive-by media”, quickly driving past a story that is no longer of use or relevance to the DNC media apparatus.

Was the past four months of media hysteria and panic really about the virus? Or was it instead a means to a desired end?

The viral pandemic must be behind us as big city mayors, who a few weeks ago threatened to arrest anyone going swimming or attending church now ignore massive crowds on their streets, few wearing masks.

Here’s a YouTube screen grab of unmasked non-socially distanced looters shopping at the Nike store on Michigan Avenue in Chicago. 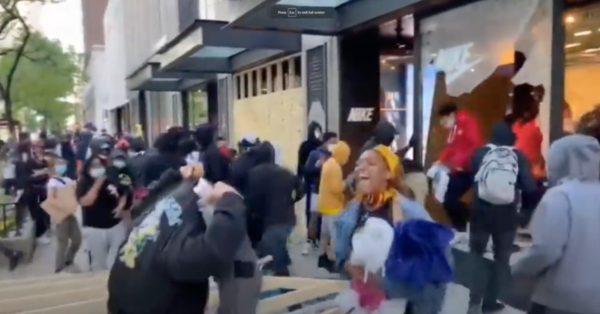 The anti-Trump triumvirate of the Media, Deep State, and Democrat party have been working nonstop to derail the Trump presidency since the 2016 election.

They illegally spied on candidate Trump, continued to spy on President Trump using distractions to hide their seditious activities. Starting with the Mueller investigation, transitioning into the Ukraine phone call and nonsensical impeachment, then the Wuhan virus, now the riots.

Are these all unrelated events? Or are they like aspen trees in Colorado, “One aspen tree is actually only a small part of a larger organism. A stand or group of aspen trees is considered a singular organism with the main life force underground in the extensive root system.”

The triumvirate described above is the underground root system with particular events as the actual trees.

For example, let’s pick a random bleak midwinter date of say, January 15. Three interesting things happened on that day. Was it a massive coincidence or a clue that today’s events may not really be about the virus?

From the New York Times, “On Jan. 15, at the international airport south of Seattle, a 35-year-old man returned from a visit to his family in the Wuhan region.” Days later he became, “The first person in the United States to test positive for the coronavirus.”

Also on January 15, the US House delivered articles of impeachment against the President to the Senate. The House passed impeachment in December, yet they waited until this day for their solemn walk across the Capitol.

Impeachment failed and China was on the economic ropes. How convenient that a nasty virus of unclear origin, laboratory versus wet market, was delivered to the US on January 15. It then took a sledgehammer to the US economy, coincidently leaving China relatively unscathed.

The triumvirate insisted that the economy close, perhaps indefinitely. Social distancing, masks, and stay-at-home orders flattened the curve. The US medical system, while stressed, was never overrun as was predicted. Trump’s approval rating remained stable during the pandemic, despite the triumvirate’s efforts to destroy him. The Dow recovered more than half its lost value and the country is reopening.

Jason Furman, a top economist in the Obama administration made this startling, and horrific to many, prediction in early April, “We are about to see the best economic data we’ve seen in the history of this country.” Other former Obama officials panicked, “This is my big worry” said a former Obama White House official who is still close to the former president. Asked about the level of concern among top party officials, he said, “It’s high — high, high, high, high.”

Time for a new narrative, one the Democrats play like a fiddle, the race card. In another coincidence, George Floyd and the police officer Derek Chauvin, who pressed his knee on Floyd’s neck, worked together at the same Minneapolis nightclub.

Did they know each other? Is there more to this story? Chauvin is white and Floyd is black, the correct combination for outrage, protests, and riots.

A few years ago when Somali-American Minneapolis police officer Mohamed Noor shot a white woman named Justine Ruszczyk, there was a court trial but no civil unrest. Perhaps that was the wrong combination.

How quickly everyone forgot about the virus. Cable and network news are focused exclusively on the riots. Almost no one is talking about COVID 19. No one at CNN is calling these protesters racist for defying social distancing rules and mask use as they merrily destroy their cities, looting already decimated businesses in their neighborhoods.

Attending church or a gathering of more than ten people was only recently grounds for arrest. Not today as hundreds gather in close proximity in what the media describe as “peaceful protests.”

No one seems to be concerned about a potential surge in Wuhan virus cases due to the rioters, negating America’s sacrifice in staying home for the past three months. It’s almost as if this is part of a grand plan. Well, maybe we should forget that “almost.”

Were these protests and riots spontaneous or preplanned and organized? Why were pallets of bricks delivered into the protest zones in Dallas, Chicago, Manhattan and other cities? Did they just fall out of the sky?

Is the virus the latest unsuccessful attempt to destroy the Trump presidency? Are the riots an attempt to gin up support for the joke of a candidate Joe Biden?

The Washington Post answers that with this headline, “New data finds young black Americans aren’t as enthusiastic about Biden — or opposed to Trump — as their elders.” What better than a race war to rile up the Democrat base?

Instead these riots have unintentionally shown us that Trump rallies are safe and that the Chinese virus is no longer a serious threat.

Notice how quickly concern about cities and states opening too quickly has been forgotten as thousands take to the streets, in contradiction to everything the smart set has been advocating. This is lost, or willfully ignored by the media, now focused back on Trump’s latest tweet.

As the enigmatic Q says, “All assets deployed, win by any means necessary, everything is at stake.” Was it really about the virus or destroying Trump?

If the viral pandemic of a lifetime can be so quickly forgotten, replaced by opportunistic riots, civil unrest, and insurgency, one wonders if the virus was really the existential threat we were told it was. Was it ever really about the virus or about the election?

Brian C Joondeph, MD, is a Denver based physician and freelance writer whose pieces have appeared in American Thinker, Daily Caller, Rasmussen Reports, and other publications.