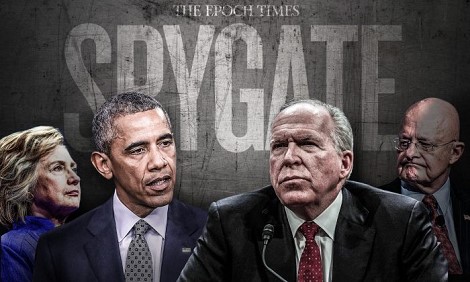 What we’ve learned in the last few weeks about the conspiracy to frame President Trump should make us rethink much of what we thought we knew about it before.

Deputy Attorney General Rod Rosenstein offered to wear a wire to a meeting at the White House to gather information that could be used to invoke the 25th Amendment to remove President Trump from office, the New York Times “reported” Sept. 21.

The story was based on a memo written by disgraced former FBI Deputy Director Andrew McCabe.

The Deputy Attorney General was being sarcastic, another person who was at the meeting told the Washington Post.

Rosenstein was serious about wearing a wire, James Baker, formerly the FBI’s general counsel, told Congress. But Baker wasn’t at the meeting. He was relying on what he was told by others who were with him on Team McCabe.

The “Rosenstein-McCabe feud dates back to angry standoff in front of Mueller,” said this Washington Post story Oct. 10.

“The key takeaway from the WaPo article is that McCabe perceived Rosenstein as a threat,” noted ThunderStrzok.

Rosenstein won. Which is good, because McCabe is a very bad guy.

McCabe and henchman Peter Strzok framed LTG Michael Flynn, then the National Security Advisor. McCabe opened criminal investigations (for obstruction of justice) into the president and Attorney General Jeff Sessions. (Which is why Sessions had to recuse himself from the Russia collusion investigation.)

An email exchange between Strzok and paramour Lisa Page indicates that having McCabe in charge of the Russia collusion investigation (aka Crossfire Hurricane), was critical to the success of the “insurance plan.”

For the “insurance plan” to work, the coup plotters had to keep control of Crossfire Hurricane, and keep the White House in the dark.

But Rosenstein and Mueller shut McCabe out. Not only did he have no say in the Russia collusion investigation after Mueller was appointed, he didn’t know what the investigators were really investigating.

Was this what Rosenstein intended when he appointed Mueller?

Trump and Mueller met privately the day before he was appointed Special Counsel. The ostensible purpose of the meeting was to discuss reappointing Mueller FBI director.  But a law forbids the FBI director from serving for more than 10 years. So what were they really talking about?

He isn’t planning to fire Rosenstein, the president said Sept. 26 after he and the Deputy Attorney General discussed the “wearing a wire story” in the New York Times.

“We had a very nice talk,” Trump said. “We actually get along.” This wasn’t the first time the President has praised Rosenstein.

Conservatives distrust Rosenstein chiefly because he’s been stiffing Congress’ requests for information. But apparently he’s doing what the President wants him to do. And doing it very well.

“At every juncture of Rosenstein’s involvement, McCabe was completely outplayed,” concluded Jeff Carlson in his must read summary of the Rosenstein-McCabe feud.

If Rosenstein is a white hat, or a black hat who’s been flipped, why has he been stiffing Congress?

Perhaps because Congress leaks like a sieve. Rosenstein may have been doing what he thought he needed to do to protect ongoing criminal investigations.

And I suspect some of the feuding between the deputy attorney general and Republicans in Congress is kabuki. It’s beneficial to Trump that so many leftists have thought for so long that Rosenstein was on the deep state team… and only now are beginning to realize maybe he isn’t.

Firing Rosenstein would be an impeachable offense, many Democrats have said. So if Rosenstein is on the job when the hammers drop, it’ll be harder for Dems and the Lying Swine to claim indictments of the coup plotters are politically motivated.

I’m still inclined to think Mueller would screw the president if he thought he could get away with it. But it is a matter of objective fact that his appointment has been a net plus for Trump.

ThunderStrzok has a timeline on what Mueller did in his first few months on the job.

What I find most interesting in it is this story by John Solomon that Robert Steele, (purported) author of the eponymous dossier, complained to Bruce Ohr, a black hat in the Justice department, that Mueller had no interest in talking to him.

Disregard spin from fake newsers. The actual indictments suggest Mueller has been hunting other game.

The midterms are in three weeks. We’re anxious for at least some hammers to drop.

But there’s much to be said for giving coup plotters enough rope to hang themselves.

“The long slow reveal is forcing Andrew McCabe to leak stories showing his misconduct and crimes,” said Dawson S. Field. “McCabe is at the point where admitting to sedition with a little spin to claim it was justifiable is better than denial.”

According to this article in New York magazine, Obama Had a Secret Plan in Case Trump Rejected 2016 Election Results.

Senior White House aides met in October, 2016, to formulate the plan, says the article, which is based on interviews with former Deputy National Security Adviser (and Iran deal point man) Ben Rhodes, and Jen Psaki, Obama’s Director of Communications.

“In the event that Trump tried to dispute a Clinton victory, they would affirm the result as well as the conclusions reached by the U.S. Intelligence Community that Russian interference sought to favor Trump,” the article said.

Obama didn’t order an ICA assessment of Russian hacking until Dec. 9. So how could the results of that assessment be known to the Obama White House a month and a half before it began?

Undercover Huber asks: “Hey Ben Rhodes, did you just unintentionally reveal that the Jan-17 ICA that Russia wanted to help elect Trump was prejudged months in advance and even before the election?”

Probably well before the election. On Feb. 26, 2016, Democrat lawyer Joel Johnson sent an email to Hillary Clinton Press Secretary Jennifer Palmieri asking: “Who is in charge of the Trump swift boat project?”

Swift boating is Democrat speak for a coordinated smear. It dates from 2004, when those who served with John Kerry in Vietnam (the Swift Boat Veterans for Truth) debunked his claims of wartime heroism.

Much of the information the FBI used to obtain a FISA warrant on Carter Page (the basis for wiretapping Trump campaign officials) was provided by Andrew Sussman, one of Hillary Clinton’s lawyers, John Solomon reported Oct. 3rd.

As we get closer to the midterms with hammers yet to fall, the knots in my stomach grow tighter. But Spygate is enormously complicated, much more so than even those of us who’ve been following it closely imagined.

The best short summary of Spygate is this by Jeff Carlson in the Epoch Times, and it’s really long.

I’d assumed work on the “insurance plan” began after NSA Director Admiral Mike Rogers discovered in March, 2016, “contractors” were unlawfully rummaging through NSA intercepts on U.S. Persons, and shut them down.

The Johnson-Palmieri email (one of those released by Wikileaks) indicates it had begun much sooner.

And it wasn’t by accident that Admiral Rogers discovered the unlawful spying. He was mole hunting.

The arrest of this Chinese spy Oct. 10 could figure into Spygate. I suspect Bill, Hillary, and Diane Feinstein are more nervous than ever because of it.

James Wolfe, the former security director for the Senate Intelligence Committee, pled guilty to lying to the FBI as part of a (very generous) plea bargain yesterday (10/15).

We’ll soon learn more about who in Congress has been leaking classified information. I doubt Sen. Mark Warner (D-Va) got much sleep last night.

Also yesterday (10/15) we learned it very likely was McCabe who leaked to the Washington Post the Flynn-Kislyak telephone conversations. (A felony.)

It’s hard to wait. But I’m confident the very stable genius in the White House, who is masterminding the greatest sting operation in history, will reveal what can be revealed when it can be revealed, in the way most damaging to our enemies.