UKRAINE HAS WON AND PUTIN HAS LOST 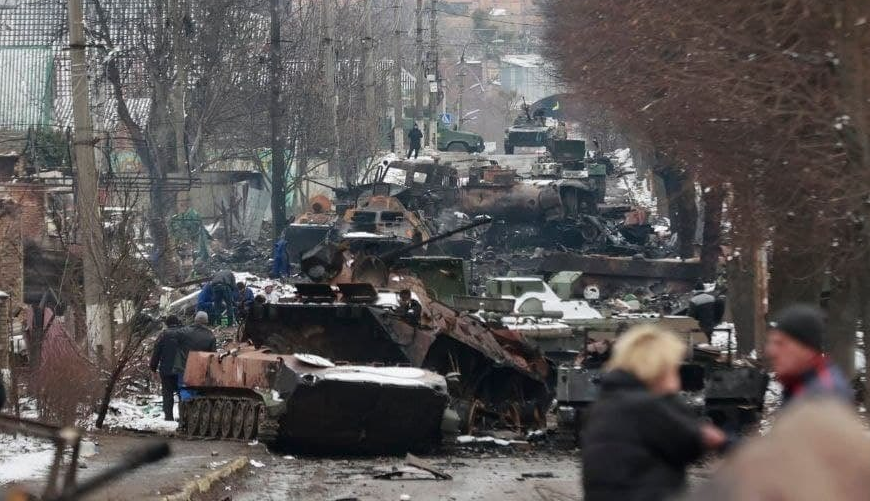 Against all the odds, Ukraine has won this war militarily. It has won because it has fought bravely and skillfully and now there is nothing Russia can do to change the political and social structure of the country.

Putin has lost big time and all he does now will create more damage against his own country than he can deliver against Ukraine. But it is unclear if he realizes or even cares about the mess Russia is in.

The destruction and murder of civilians goes on day and night, in Kharkiv and other cities, because like a petulant ex-lover, Putin wants to destroy Ukraine. It is an “if I cannot have her no-one will attitude.”

Many of his troops are complicit in his war crimes but these are being documented clearly – the Hague awaits. The two major cities of Kyiv and Kharkiv are holding out well beyond all expectations.

The army is blocking the armored attacks outside of both cities, and west of Kyiv is actually pushing back out by fighting around the vast numbers of destroyed Russian vehicles. New attacks from Russia are met in the same stubborn way.

Inside the cities the morale is high and defiance is absolute. If Russian troops break in they will be met by thousands of armed territorial volunteers, police, security forces and National Guard ready for a fight. Russia cannot beat this. There is even a molotov cocktail factory in Kyiv and they have been pouring beer away to re-use the bottles.

Russia continues to fire missiles and rockets into both cities targeting schools and medical facilities and killing inhabitants including children. Some troops have progressed towards Kyiv from the Eastern border bypassing Sumy but have either been stopped or run out of fuel. Sumy holds out, but there are reportedly 600 Indian students there needing urgent evacuation.

Around Donbas, the front line holds strongly and there has even been some small movement forward into the previously occupied territory. In the south the Russian troops coming out of Crimea have continued to expand their positions in all directions. But this is not without setbacks.

As well as a stubborn Ukrainian army defense, they face many logistical and morale problems as they go deeper. In places like Berdyansk, a port city in the Zaporizhzhia Oblast, the local population have simply refused to let the troops stay and have driven them out by strength of will, character, and numbers.

The Russians claim ownership of cities like Kherson, but Ukrainian flags are still flying over the government buildings. Russians are there physically, but somehow not mentally. The major city on the sea of Azov, Mariupol, continues to survive despite heavy around the clock shelling and ground attacks.

The Russians have been unable to gain control. Odesa and Mykolaiv on the Black Sea have awaited landings from Russian naval forces for several days now but there are unconfirmed rumors that the Russian marines have mutinied. The ships appear on the horizon, and then go back.

Overall the Russian forces are suffering badly. It is no surprise. They were poorly prepared despite the claims of previously outstanding training and exercises from Defense Minister Sergey Shoigu and General Valary Gerasimov. Their leadership is weak with many officers avoiding combat where they can, and the tasks given by their generals are often militarily stupid or simply suicidal.

Some soldiers have been waiting since before Christmas near the borders in poor conditions with poor food (ration packs with eat-by-dates of 2015) so have little enthusiasm for a fight.

We have yet to see how much Belarus really wants to take part in this war. But if they do commit they will surely suffer the same fate as the Russians. What happens next will largely depend upon the actions of the International community. Russia will continue to try and destroy the fabric and morale of the country including national communications and just now even the large Zaporizhzhia nuclear power facility .

Putin is stupid enough to allow this.

But this is a race against time for Putin – the sanctions are beginning to bite, the Russian economy is in freefall and the population is beginning to wake up. The Russian weekly newspaper Argument and Facts today (3/04) had two blank pages with the sentence, “today there is no news from Russia”. That tells you everything.

British Army LtCol (ret) Glen Grant has worked in the defense ministries or armed forces of fifteen European countries including Ukraine, Bulgaria and Poland.  He is a defense and security expert for the Ukrainian Parliament, and is a lecturer in strategy and crisis management at Riga Business School in Riga, Latvia.