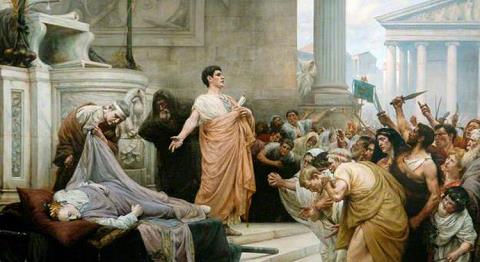 As the fall elections approach, it’s clear that the Left side of the aisle is getting nuttier by the day.

The public spectacles of the two funerals, Aretha Franklin’s and John McCain’s, brought forth the usual characters from our long-running American sitcom-cum-political soap opera.

Leading lights of the Permanent Bipartisan Fusion Party, including George W. Bush, Barack Obama and Joe Lieberman, in Washington for the now-sanctified Maverick – who seemed not to have the dearly departed on their minds, but their bête noire in the White House, Donald Trump.

Old feuds, such as that between Bush and McCain, were forgotten as, like Marc Antony over the bleeding corpse of Julius Caesar, they delivered their orations designed not so much to praise McCain but to bury Trump.

When even funerals are politicized — and let’s face it, McCain got the ball rolling on that score well before his death — then we have come to the end of Civility Road, for there is literally nothing sacred any more, even on the secular Left.

But this is what happens when your entire world revolves around politics, and the politics of the moment are not going your way. When all you believe in is a quasi-religious ideology then you are going to be frequently frustrated when their Satan beats your God every few years.

By investing every bit of psychic and emotional and misplaced spiritual energy into something as definitionally changeable as who occupies the White House, you are doomed to perpetual frustration.

Thus is lunacy now abroad in the land. The approaching congressional elections have much to do with it.

The Left failed first to prevent Trump’s candidacy, then failed in betting the house on Hillary Clinton’s inevitable victory in 2016.

The Left next failed cashing in the DOJ/FBI’s “insurance policy” (the “Russian collusion” fantasy), then unleashing, via Rod Rosenstein, the Straight Arrow’s endless investigation into not Russian collusion but the president’s past life and business arrangements.

Now the Left is failing once more in mounting via their journalist allies the “Resistance” to the duly elected president and our entire Constitutional system of governance, and harrying him every step of the way since.

Little wonder the sore-loser Left has been driven mad by the manifest failure of the Arc of History to bend their way.

Accordingly, in the wakes of the two funerals, all passion is now being directed at the two possible onrushing waves.

Will the Democrats take back the House (possible) and the Senate (impossible) and thus unleash the powers of impeachment upon the miscreant in the White House?

Or will those Deplorables, whose votes put the president in office, be so inflamed by everything that’s happened since November 2016 that they will once again rush to the electoral barricades to make sure the Democrats, like the Kaiser’s troops at Verdun, shall not pass?

This hortatory column by Radical Alinskyite George Goehl in The Hill (last Friday, 8/31) is typical of the Left’s  desperate mind-set:

“This week, Florida Democrats nominated Andrew Gillum for governor. The nomination didn’t just make history because Gillum is black — though he is the first African-American candidate to be nominated by a major party for governor in Florida history — he’s also making history as part of a wave of diverse progressives with bold visions for our country’s future.

He ran on a  platform of Medicare for All, eliminating cash bail, and fighting the climate change that is fueling brutal flooding across his state.

But that wasn’t the only history-making win last night. In Arizona, David Garcia — a social justice progressive running to revitalize public education — won the nomination for governor.

Not only could he be the state’s first Latino governor in decades — his victory also marked a milestone for the Resistance movement. Garcia’s campaign exploded in popularity in the midst of the new era of mass-teacher strikes, a clear part of the growing resistance to austerity.

These two campaigns have a lot in common: they show how the progressive movement is reclaiming the soul of the Democrat Party in the Trump era. Democrat primary voters are showing up in historic numbers to stand up for diverse candidates with a bold, progressive vision for our nation’s future that throws austerity, and the idea that white and establishment equals viable, in the trash.”

And since you can’t make a progressive omelet without breaking a few ancient yeggs, the old white guard must go, says lily-white Goehl:

“With all this change, it’s time for Democrats to discard old ideas about who is a ‘viable’ candidate once and for all. The ‘safe’ moderate, self-funded, white candidates the Democrat establishment loves to back just don’t have the hearts of voters anymore. It’s voter enthusiasm that propelled Gillum to a victory that caught many pundits off guard.

Not only are diverse progressives winning, they are bringing the Resistance to the polls. Vermont netted the second highest primary turnout in the state’s history with Christine Hallquist on the ticket, who could soon be our nation’s first transgender governor. Arizona is predicting record turnout. Florida had the highest primary turnout since 2002.

The Democrat base doesn’t just want a person with a D by their name who can pay for TV ads, they want someone and something to fight for. That means someone who is going to fight for them – because they’ve been there.

Here’s the honest truth: Trump may have sparked the modern resistance, but sustaining it requires giving people something to fight for, not just against. That’s why candidates like David Garcia, Andrew Gillum, Stacey Abrams, Paulette Jordan, and Ben Jealous are winning, despite polling, the experts and the naysayers.”

Maybe. It’s true that the Democrats’ current national “leadership” consists of doddering fogies like Nancy Pelosi and the rest of the glue-factory team that force-fed us Obamacare on Christmas Eve like a goose being fattened for the slaughter.

It’s also true that bit of hubris cost the Democrats dearly, as the subsequent congressional and gubernatorial wipeouts of 2010 and 2014 demonstrated. Pundits didn’t see those red waves coming, either, any more than they foresaw the mother of all tsunamis in 2016.

I’ve been skeptical about the “blue wave” for months now, and remain so.

Nothing at all has changed politically since the 2016 election, except that the Left is even crazier than it was then.

But much has changed economically, and despite the media’s best efforts, in true post-modernist fashion, to show that the boom is “really” being caused by Obama’s policies, not Trump’s, few are paying attention to such standard-issue and by now discredited sophism.

Thanks, President Trump.  And thanks, Jordan Peterson!

Cathy Newman’s frustration pretty much sums up the feeling on the Left at the moment.

They’ve thrown everything they have at the Deplorables’ Hero and nothing seems to stick. Or rather, everything sticks, but nobody cares.

If Reagan was the Teflon President, then Trump is the Invulnerable President, proudly displaying the knives in his back as, unlike Caesar, he still stands and tweets.

Cry havoc and let slip the dogs of war. And pass the popcorn while you’re at it.