Even Trump-supporters have wondered about Trump’s tweets implying that MSNBC’s Joe Scarborough had something to do with a young intern’s death in his office when he was still a Florida congressman.

It’s true that Scarborough and his co-host and wife Mika Brzezinksi have spent three years accusing Trump of treasonous collusion with the Russians, but Trump’s venom still seemed strange.

I, however, don’t think it was strange at all.  Trump is one of the most calculating, rational people ever to occupy the White House.

He’s been faced with a serious problem, which is the fact that the immensely powerful social media giants, which are the gateway to most information nowadays, have already begun trying to sway the election to Biden.  Legislatively, thanks to three years of Russiagate and the current hostile House, Trump has been powerless.

The ostensible story is about Lori Klausutis, 28, who worked in Scarborough’s Fort Walton Beach congressional office from 1999 to 2001.  On July 20, 2001, when Scarborough was out of town, Klausutis’s body was found in the office.  Because of a very bizarre medical examiner, it wasn’t clear how Klausutis died, making her death ripe for different theories.

Initially, those theories came from the Left.  In 2010, hard-left Daily Kos founder Markos Moulitsas lost a gig at MSNBC when he tweeted directly to Scarborough about Klausutis’s death.  Other leftists such as James Wolcott and Michael Moore attacked Scarborough, too.

After Scarborough turned on Trump in 2016, Trump eventually tweeted out an allusion to Klausutis’s death:

It was just recently that Trump again started tweeting about Klausutis’s death:

“.@jack At what point is @Twitter a part of this? TAKE DOWN TRUMP’s ACCOUNT— the world would be safer. Retweet if you agree

I think Mika’s demand was what Trump was waiting for.  He wanted to goad Twitter into doing something to get him off the platform.  So he sent out this outrageous tweet four days later.

And sure enough, on Tuesday (5/26) Twitter took the bait.  As I’m sure Trump had calculated, Twitter didn’t do something as obvious as responding to Mika’s demands.  Instead, it flagged two of Trump’s tweets as false: 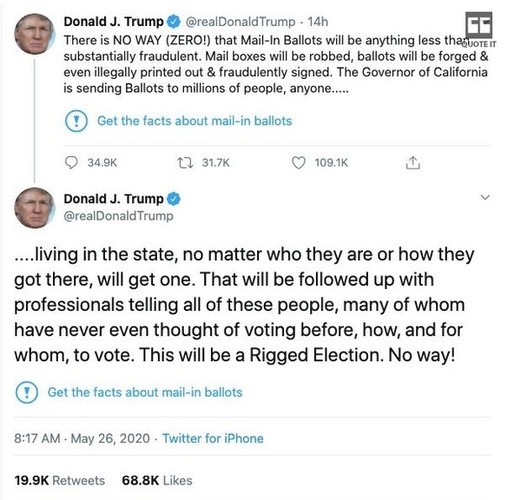 By challenging the president that way, Twitter made the fatal mistake of overtly inserting itself as a content editor, and therefore publisher, of overtly political material.  Trump was ready: 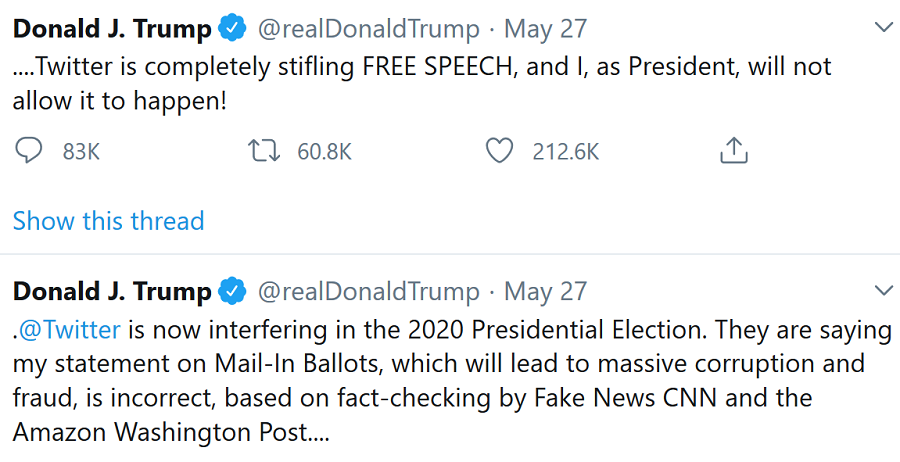 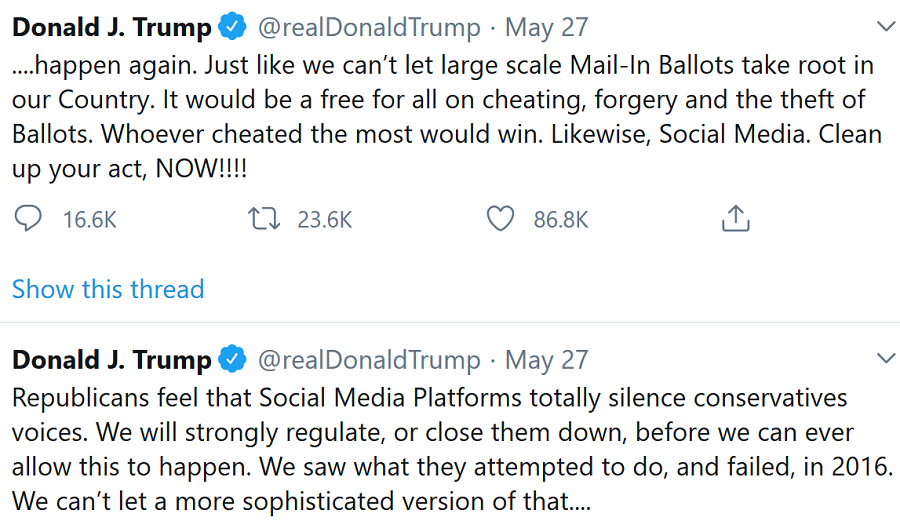 We didn’t have to stay tuned for long, did we?  Late today, the President signed an Executive Order Preventing Online Censorship (full White House text).

Watch and enjoy his comments upon signing the order in the Oval Office:

The Order will target the social media giants’ current immunity from libel and defamation suits because they’re viewed as bulletin boards, not publishers.  However, when they actively manipulate content — especially the most political content of all, which is statements from the President of the United States — they’ve put themselves in an editorial position and should be held liable.

This has to have been Trump’s goal all along with those Scarborough tweets.  He goaded Twitter into censoring him, and the social media giant walked right into his trap.  Well played, President Trump.  Well played.