TRUMP’S PLAN TO CHANGE THE WORLD 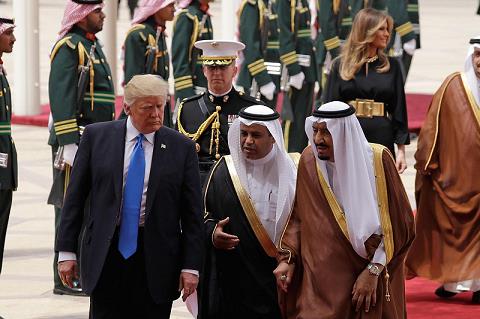 The President and First Lady arrive in Riyadh, Saudi Arabia, May 20, 2017

President Donald Trump has a plan to defeat radical Islamic terrorism off the battlefield, judging from the publicly available evidence.

The plan is simple, if extraordinarily ambitious: Reform Islam.

More specifically, the aim is to induce Muslim leaders to reject jihad and terrorism, and to embrace and promote a moderate practice of Islam.

Trump’s public calls for an end to Islamic terrorism made headlines, but largely unnoticed has been a larger and concerted plan to reform Islam by eliminating the root cause of such violence: the extremist ideology that fuels jihad.

The president appears to be coordinating an effort to that end with a new kind of Arab leader, Saudi Crown Prince Mohammad bin Salman, who is said to admire Margaret Thatcher.

Just one month before Salman assumed power by becoming the heir to the Saudi throne, Trump called upon Muslim leaders to fundamentally reform Islam by rejecting terrorism and global jihad during his landmark speech in the Saudi capital of Riyadh on May 21, 2017.

“When we look a back at President Trump’s legacy 10 to 20 years from now, there’s going to be two events that have historic significance above all else,” says former deputy assistant to the president, Sebastian Gorka.

“One is the speech he gave in Poland at site of the Warsaw Uprising, which was a reaffirmation of American leadership and the Judeo-Christian values of our civilization. The second is the monumentally important speech he gave in Riyadh in front of the assembled leaders of the Arab and Muslim world.”

“With regard to the latter,” Gorka added, “it really needs to be understood as a catalytic moment in history. As one Arab woman told me just a few days after he gave the speech, ‘This is what we’ve been waiting for, for 17 years,’” apparently referring to the terrorist attacks of Sept. 11, 2001.

Salman became crown prince on June 21, 2017, exactly one month after Trump’s speech, and since then appears to have become a key partner with the White House. According to the New York Times, “it is widely believed” that Salman is coordinating details of the administration’s Middle East Peace plan with Jared Kushner, senior adviser to the president and Trump’s point man on the project.

Salman might seem an unlikely reformer because members of the Saudi royal family have long been suspected of supporting and financing Islamic terrorism. Saudi Arabia is also the source of Wahhabism, an austere and repressive form of Islam thought to inspire a jihadist movement in the 1990s led by Osama bin Laden.

But, this prince is a different breed of Saudi leader. Salman hasn’t just pledged to rid the world of Islamist terrorism. He has also called for wide-ranging reforms to moderate the practice of Islam in his country and around the world. And he has begun instituting those reforms in Saudi Arabia.

Salman reportedly shocked a group of American Jewish leaders in March by saying that it was time for the Palestinians to negotiate peace with Israel “or shut up and stop complaining.” He then shocked the Arab world in April by stating that Israelis “have the right to have their own land.” That statement is believed to be the first time a Muslim leader has ever publicly affirmed Israeli’s right to exist.

“We want to lead normal lives, lives where our religion and our traditions translate into tolerance, so that we coexist with the world and become part of the development of the world,” he announced.

To accomplish all this, Salman has had to battle against his own deep state, powerful factions in the royal family and the Saudi government under the influence of Wahhabi clerics who want to see a repressive and bloody sharia remain the supreme law of their land.

The prince may be winning that battle, as the Washington Post ran a story in June headlined, “Saudi Arabia’s once-powerful conservatives silenced by reforms and repression.” The paper reported that the country’s “most conservative Islamists are reeling from a loss of influence,” and that fundamentalist clerics have been jailed.

Prince Salman did not have a real ally in the White House until the election of Trump.

The paper said the prince would routinely lecture senior American officials, including the president. Salman was reportedly angered by what he saw as the failure of Obama’s policy in Syria and his warming of relations with Iran.

The prince was particularly incensed over Obama’s comment that Saudi Arabia must “share the neighborhood” with Iran, the world’s biggest sponsor of state terrorism and the kingdom’s mortal foe.

In sharp contrast, Salman and Trump were all smiles when they met at the White House in March. 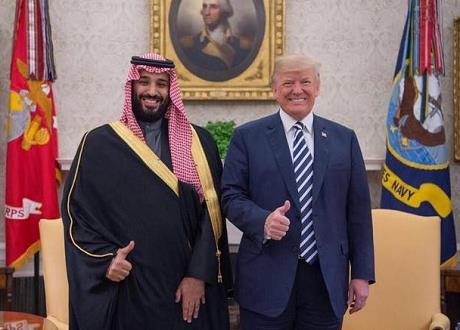 Trump remarked, “We’ve become very good friends over a fairly short period of time.” He added, “I would really have to say the relationship was, to put it mildly, very, very strained during the Obama administration. And the relationship, now, is probably as good as it’s really ever been, and I think will probably only get better.”

Gorka observed, “Irrespective of what the Koran may say about the infidel … the leaders of these nations wish to be our friends and our partners, and wish to eradicate the jihadists from among their midsts.”

The former deputy assistant to the president believes Trump’s speech in Riyadh will prove to be a historic catalyst for change, remarking, “For 16 years under Presidents Bush and Obama we couldn’t talk honestly about these issues. Now, under President Trump, we can.”

“The president pulled no punches,” Gorka told me. “It wasn’t a protocol speech, it was very much tough love. In no uncertain terms, President Trump demanded that the Arab-Muslim world rid their mosques of extremists and rid their societies of terrorists.”

Trump began by stressing he would avoid the interventionist mistakes of his predecessors, saying that America would not seek to impose our way of life on others.

“We are not here to lecture,” he said. “We are not here to tell other people how to live, what to do, who to be, or how to worship. Instead, we are here to offer partnership — based on shared interests and values — to pursue a better future for us all.”

Trump articulated a lofty goal of “peace, security, and prosperity — in this region, and in the world.”

And, speaking to the leaders of more than 50 Muslim countries in attendance, the president said he planned to do it with “a coalition of nations who share the aim of stamping out extremism.” Trump insisted that “Muslim-majority countries must take the lead in combating radicalization.”

Trump particularly emphasized that only by defeating the ideology that “drives” terrorism could the Mideast achieve peace.

The president called it “history’s great test — to conquer extremism and vanquish the forces of terrorism.”

Trump’s bottom line: “This is a battle between Good and Evil.” And he bluntly stated that evil was in their very mosques: “A better future is only possible if your nations drive out the terrorists and extremists. Drive. Them. Out. Drive them out of your places of worship.”

That would be a historic achievement. Many scholars, analysts and politicians have argued that radical Islam can never be defeated military, primarily because its appeal is too widespread and too deeply ingrained among millions of Muslims. Many have long believed Islam will have to change itself to bring an end to global jihad.

James Q. Wilson, who taught government at Harvard for a quarter century and was a longtime adviser to presidents from both parties, wrote an influential article in 2002 titled, “The Reform Islam Needs,” and subtitled, “Religious toleration undergirds Western freedom. Islam is centuries behind in developing it.”

He argued that Islam will not purge itself of radical fundamentalism until the religion is reformed, as were Christianity and Judaism, to become tolerant enough to coexist peacefully with other faiths.

But the reform of Islam has seemed unlikely because few Muslim leaders have been brave enough to publicly challenge the jihadists’ medieval morality. Now, Salman is doing just that. And his call to end Islamic terrorism is backed by Trump.

If their efforts succeed, it could result in a epic sea change in global politics.

Gorka put into perspective just why the president’s Riyadh speech to the Arab world was such a watershed moment and why his growing partnership with a new generation of moderate Arab leaders is such a historic opportunity.

“The argument here is very simple one: reformist Arab and Muslim leaders, whether Saudi Arabia’s Mohammad bin Salman or Egypt’s Abdel Fattah al-Sisi, have been empowered thanks to the catalytic effect of President Trump sending a very simple message to their citizens. Trump gave these leaders permission to say such things in public.”

Garth Kant is an investigative journalist in Washington DC, and the author of How to Write Television News.