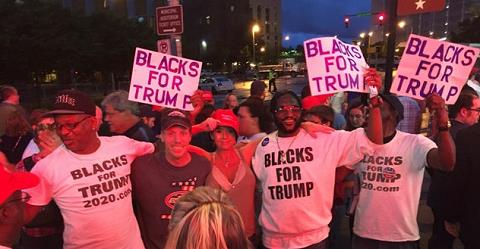 The first thing I noticed when I walked into the Trump rally in Nashville last night (5/29) was that Trace Adkins was singing. Not bad! (Hey, it’s Nashville.)

The second thing I noticed was that Jim Acosta wasn’t smiling, virtually the only person in the auditorium who wasn’t. If you don’t like Adkins, either you don’t like music or your Trump Derangement Syndrome is so great you couldn’t even groove to Bach or The Beatles in their heydays. Too bad for Jim.

I also couldn’t help cogitating on the drama of the day — the defenestration of Roseanne by ABC. Nashville is a city of the arts and your mind tilts that way. I suspect Roseanne wanted to shoot herself in the foot with that dumb tweet in a “can’t stand prosperity” kind of way after the amazing success of the second coming of her series.

There are plenty of bad things to say about Valerie Jarrett, none of which have anything to do with race, but plenty to do with blood spilled all over the Middle East. ValJar has a lot to answer for with the Iran Deal, for which she was, in significant part, one of the main instigators.

The evil that came from that dwarfs anything Roseanne said or could say in one of her infamous loudmouth moments. I’m sure that goes flying well over the heads of ABC solons.

Which leads me to another Nashville moment. Being here in Music City, isn’t it high time for the right to take back the arts, or at least some decent part of them?

Why is it CBS, NBC, and ABC are all slavish soldiers of the moribund and increasingly boring Left? (Can you watch “Good Morning America” without feeling you are having your brains drilled?)

The fault is not so much the artists as it is the financiers. Conservative fat cats support Beethoven at the Philharmonic but shy away from contemporary artists. I love Beethoven too, but he’s not moving the culture in 2018. Time for the financial community to get on this.

Maybe Nashville’s the place to start.

But enough diversion. Trump’s on. They clearly love him in Nashville, but not Lamar Alexander and, especially, Bob Corker when they are introduced. Corker get roundly booed. (The Iran deal again?)

Congresswoman and senatorial candidate Marsha Blackburn is then introduced. She, however, is loved by the crowd. A clear favorite and early supporter of Trump, she looks and talks like a winner and likely will be. 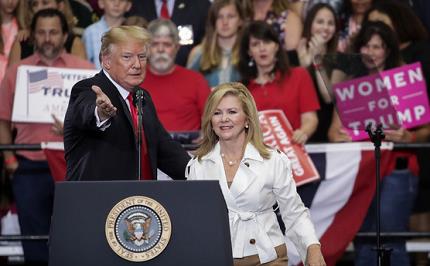 She speaks well, but briefly. This, as they all are, is a Trump night. He’s the main event and the campaign never ends. Having seen him do a dozen or more of these now, he continues to get better at them. He’s more relaxed and free-flowing.

This must rankle the media more than anything. He is our entertainer-in-chief, so much more entertaining than they are.

One of the other (related) reasons the Deep State loathes Trump is that he is noisy. He demands attention. The Deep State demands quiet so no one knows what they are doing.

Tennessee is interesting because it has two more or less Deep State Republican senators in Alexander and Corker. I’m not sure how that happened, but now, in probability, it will have Blackburn, a vast improvement for those of who want a government responsive to the people, not to itself.

These Trump events are in many ways corny, but corny in a good way. For that reason, they don’t get old, although the president repeats many of the same memes again and again. But since he is mostly a spontaneous speaker, he will zig and zag on occasion to keep your interest.

Also, he adores connecting with his audience and the audience, in turn, is relieved and flattered to be addressed as people, not as serfs to be lectured. The billionaire president is an actual person. (No wonder Michael Bloomberg hates him.)

Last night he zig-zagged for a substantial amount of time about the movement of the U.S. Embassy to Jerusalem. The nearly one hundred percent gentile crowd roared its approval. I have to admit that as a Jew I was moved. I wish my Jewish friends in New York and Los Angeles could have heard it. But I suspect they won’t let themselves.

Paradoxically, on the way, we met ten or so vociferous members of “Blacks for Trump” waving placards. Not a large group but, I have a hunch, a growing one.  They were, to put it mildly, welcomed by the crowd, many of whom wanted to be photographed with them.

The time’s they are a changing indeed.  Wouldn’t it be something if the “Blacks for Trump” really expanded? If that happens, the surprise of 2016 will be a mere piffle compared to what’s coming in 2020.

How ‘bout this for a 2020 campaign slogan: “Smash Identity Politics!”

And now, for your viewing pleasure direct from the Gaylord Opryland Center in Nashville, Tennessee, may I present the President of the United States, Donald J. Trump:

Roger Simon, after over four decades in Los Angeles as a novelist, Academy Award-nominated screenwriter and co-founder of PJ Media, has moved to Nashville.