TRUMP TEACHES THE GOP HOW TO FIGHT 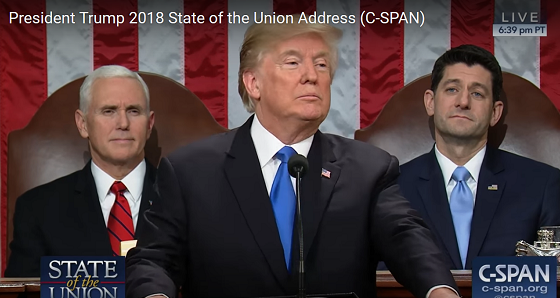 It’s an observation so strikingly true that you wonder why you didn’t think of it earlier. “Donald Trump,” a friend told me the other day, “is teaching the Republican Party how to fight and how to win.”

The evidence is everywhere every day, and it was on vivid display at the SOTU last night (1/31). The president remains in a fighting mood, determined to keep punching his way forward.

The Trump way starts with the passage of the historic tax cuts despite tiny Republican majorities in Congress and scare tactics from the Left. Before passage, polls showed the public was strongly opposed — but Trump pulled, pushed and bullied his party over the finish line.

The roaring results, with millions of workers already getting bonuses, pension boosts and pay hikes, vindicate his determination.

Another piece of evidence is that the government shutdown over the “Dreamers” was a huge defeat for Democrats, and Trump piled on the pain with a blistering ad about crimes by illegal immigrants that helped force divided Dems back to work.

The decision by the House intelligence panel to write and release its memo on possible FBI misdeeds is yet more evidence of a new fighting spirit. Even Speaker Paul Ryan, averse to conflict by temperament and training, forcefully supported the memo’s release, saying it was time to “cleanse” the FBI.

This is not George Bush’s or John Boehner’s Republican Party. This is Trump’s GOP, as he demonstrated in spades in his first State of the Union address.

For days, the White House advertised his speech as one where a kinder, gentler Trump would reach across the aisle and invite opponents to work with him on bipartisan programs to fix our broken immigration system and our crumbling infrastructure.

After all, that’s what Republicans usually do — soften their tone and, badgered by a liberal Washington press corps, give in to big government ideas.

While Trump did indeed deliver on those promises, it was just barely. Those offers were exceptions in an otherwise damn-the-Democrats, full-speed-ahead performance.

If this was Trump reaching out his hand, he was doing it from a position of strength and supreme confidence. If there is to be compromise, Dems will have to pay dearly for it.

That the president intends to drive a hard bargain was made clear during his remarks on immigration when he said pointedly, “Americans are dreamers, too.”

The tough tone, leavened only by the moving stories of first responders, military heroes and other noteworthy guests seated near the first lady, suggests that Trump is sticking with what got him to the dance in the first place.

He will continue to be who he is.

The idea that he should be someone else has been a constant refrain from the day he entered the race in 2015. Occasionally he has, but only temporarily, and if last night means anything, it’s that he sees no reason to make radical changes now.

The tax reform and the early signs that it will pay big dividends in economic growth and higher wages give the president a strong wind at his back. He rightly touted the exuberance as “our New American Moment” and declared that “there has never been a better time to start living the American dream.”

On one hand, that approach is a high-risk gamble. Trump is putting all his chips, and his party’s, on the belief that his accomplishments will win over enough voters so the GOP can keep both houses of Congress.

The risk is that if he’s wrong, and the midterms are a referendum on him instead of his policies, then the House could flip to Democrats, many of whom want to draw up impeachment articles on Day One. And with special counsel Robert Mueller still on the prowl, the risk is multiplied.

Yet, in truth, America also saw evidence last night that Trump’s bet may be his best chance. The Dems who came to hear the president looked like the unhappiest people on Earth.

They rarely stood and applauded, except when it would have been embarrassing not to. Even when the president touted the lowest African-American unemployment in history, the party that produced the first black president and has the lock on the black vote gave a collective scowl.

Dems, then, are giving Trump no reason to believe they’re ready to bargain. All of them in both houses voted against tax cuts, and House Minority Leader Nancy Pelosi even demeaned bonuses and pay hikes as “crumbs.”

The party is still stuck in resistance mode, with Congress members following the radical Left like so many lemmings.

Against that backdrop, Trump has nobody on the other side to ­negotiate with. For now, at least, full speed ahead is both his best and only option.  And the Republicans’, who are lining up to fight at his side.

Michael Goodwin is Putlitzer Prize-winning journalist for the New York Post and a Fox News Contributor.