TRUMP SHOULD NOT SAVE DEMOCRATS FROM THEMSELVES 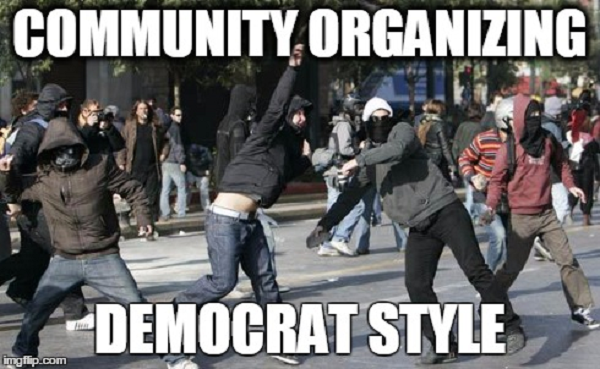 When looters threatened to bring their mayhem and destruction from the city of Chicago to my suburb of Orland Park on Sunday (5/31), our town’s leadership acted quickly.

Our police chief—Tim McCarthy, the secret service agent who took a bullet for Ronald Reagan in 1981 and saved the president’s life—could be heard on the police scanner calmly managing a multifaceted operation to keep people and property safe. While cities across the country, including the nation’s capital, continued to burn, my suburb of 58,000 residents, like many throughout the Chicagoland area, was unharmed.

Why? Because our law enforcement officers knew they had the support of our political leadership and the residents. Further, people were prepared to defend their businesses and families if necessary.

The Party of Lawlessness

But that is not the case in many urban areas, big and small, across the country. Police have been ordered to stand down; there was no plan or preparation as the thugs advanced. (The police chief of Raleigh, North Carolina said she would “not put an officer in harm’s way to protect the property inside a building.”)

The same Democrats who just a few weeks ago threatened beach walkers, churchgoers, and other disobedient social distancers are giving a wink and a nod to arsonists, looters, and attempted murderers.

Democrats belong to the Party of Lawlessness—and by law, I mean rules that have been subjected to a recorded vote by elected officials, not CDC guidance on mask-wearing. Open borders, empty jails, voting rights for noncitizens, uncollected debt are just a few features of their anarchist utopia.

No wonder Democratic politicians only give lip service in condemning the looters; they share a mutual contempt for the ideals on which the country was founded and a common mission to fundamentally transform the country and all its institutions to yield to their America-hating point of view.

Why, then, should we be compelled to rescue them as violence continues? Why should we not watch in smug satisfaction as they are hoisted with their own petard?

Of course, it tugs at the heartstrings to see shop owners in Minneapolis weep at their looted livelihood. Yes, innocent children are caught in the fray. But this is the culture Democrats not only created but want to put on steroids after the 2020 election.

The people who live in Democrat big cities—a mix of very wealthy whites and low-income minorities is the common demographic—elected far left political leadership and not by a slim margin.

Jacob Frey, the mayor of Minneapolis, won in 2017 with 57 percent of the vote by defeating another Democrat. Philadelphia Mayor Jim Kenney won last year with more than 80 percent of the vote; ditto for Los Angeles Mayor Eric Garcetti. Republicans don’t even bother to run. This is the story in nearly every Democrat-run city in America.

To flip the script: you bought it, you broke it.

Some folks on the Right, however, are urging the president to use his authority to quell inner-city chaos by deploying the military.  Senator Tom Cotton tweeted Monday morning (6/01):

“Anarchy, rioting, and looting needs to end tonight,” “If local law enforcement is overwhelmed and needs backup, let’s see how tough these Antifa te rrorists are when they’re facing off with the 101st Airborne Division. We need to have zero tolerance for this destruction.”

Cotton isn’t alone. My friend Andrew McCarthy offers a weighty argument as to why Trump should act unilaterally and militarily to defend cities under siege. McCarthy makes a case, a strong one, that the Insurrection Act of 1807 empowers the president to send in the troops to protect the citizenry of any state, federalism be damned. McCarthy writes:

“What has happened over the last few nights in major cities of the United States is unacceptable. It has gotten worse because the federal and state governments have failed to convey the signal that order will be maintained and the rule of law enforced. That must end. The president and governors must work together to restore order, including by deployment of the military where that is necessary.”

There’s no doubt Cotton and McCarthy make a solid, legal point. And under normal, or even semi-normal conditions, that sort of intervention would be considered dire but necessary. But we are living in the Age of Trump, a time when all pretense of political civility, largely on the Left, is gone.

Simply put, it’s impossible to restore order with disorderly people. A just, properly-functioning nation requires some modicum of trust and respect on all sides—that is nonexistent today.

No method, no tactic, no law-breaking has been too extreme in service of destroying Donald Trump, and with him, his supporters.

And all of it—illegal investigations, impeachment attempts, the use of spies and secret courts, relentless media harassment—has been egged on by the politicians now completely impotent, either congenitally or purposely, in the face of crisis with the full-throated consent of their like-minded constituents.

The Future Is Now

Luckily, one has to look no further than a few weeks ago for evidence of the Left’s mendacity. Governors such as Andrew Cuomo, after failing to prepare for New York City’s coronavirus surge, repeatedly assigned their failures to the president.

While thousands of senior citizens died of the disease based on Cuomo’s fatal order to readmit COVD-19 patients into nursing homes, Cuomo has played the media-embraced foil to the president. Trump essentially bailed Cuomo and other blue-state leaders out of the mess they created, one they initially denied and then mishandled from day one, but the president nonetheless stands accused of killing 100,000 Americans, coronavirus’ alleged body count.

The rest of the country, sadly, has paid the price for the Democrats’ incompetence and refusal to act until it was too late—yet their constituents overwhelmingly support them.

More than 80 percent of New Yorkers approve of how Cuomo managed the coronavirus emergency according to a May poll; only 35 percent approved of the president. There is no winning with these folks.

Consequently, not one drop of Marine blood should be shed on the streets of Minneapolis or Chicago or Los Angeles to save Democrats from themselves yet again. (The sole exception is Washington D.C.: The president last night imposed a curfew and deployed “thousands and thousands of heavily armed soldiers” to the nation’s capital to stop the chaos.)

If Trump orders the military to salvage what’s left of inner-city America, even if it provides a sweet victory over Antifa or bolsters his reelection, it gives Democrats cover. They can feign innocence, express outrage at the uninvited usurpation of their authority, deflect from their own ineptitude and cowardice, and blame Orange Man Bad one more time.

If the violence spreads outside of inner-cities, prompting suburban leaders to seek federal help, Trump should consent. But city officials, who aren’t requesting help, and the people who put them in power must live with what they have wrought.

The future, as Democrats love to wax, is now. We certainly wouldn’t want to get in the way.