TRUMP IS HATED FOR HIS VIRTUES NOT HIS VICES 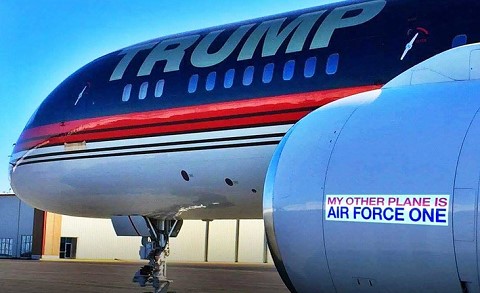 At this very moment the GNP is humming along at 4.1 percent, the S&P and NASDAQ are at record highs, and unemployment is at record lows for Blacks. Hispanics, Women and everyone else.

Meanwhile, the infantile buffoons in the Democrat Party and their mainstream media lackeys are calling so loudly and incessantly for the impeachment of the president you’d have to be on the North Col of Everest not to hear them.

And even then you’d have to be wearing the most expensive noise-canceling ear muffs extant.

Of course they are screaming equally loudly, “Russia-Russia-Russia” when anyone with an IQ within spitting distance of triple digits knows the real problem for the USA has been China by roughly 400X for the last decade or longer.

If you’re looking for someone to impeach, how about Dianne Feinstein who, we just learned, had a Chinese spy as her chauffeur for twenty years, even while she was chair of the Senate Intel Committee? At virtually the same time — 2010-ish, when Obama was president — close to the entire U.S. spy network in China, several dozen people, were apprehended and killed by the Chinese on their soil in an unprecedented intelligence disaster.

Only a few survived. Connection? Perhaps the New York Times or the Washington Post will investigate (as if).

Meanwhile, China, until quite recently and still to a great extent, had the run of the U.S. higher educational system via thousands of exchange students and their Confucius Institutes.

These are the same American universities where professors urge the president’s impeachment while promoting the virtues of socialism even though Venezuela, once by far the wealthiest country in Latin America, is imploding at an extraordinary pace with unheard of inflation and banknotes used for toilet paper, because of…. socialism.

At the same time, according to polls, our gullible and uneducated (or rather miseducated) college students — attending schools more richly endowed by capitalism than any in history with sushi in the dining halls and hot rock saunas in the gyms — and a majority of equally clueless Democrats, led by Bernie Sanders and a young woman who couldn’t find the Middle East on a map, believe that the socialist system is indeed superior to ours.

What’s going on here? Is there something in the water? Has much of the country had a mass lobotomy?

Everything else must stop! Forget North Korea. Forget Iran. Forget trade negotiations. Forget our life expectancies declining for the last two years because of fentanyl brought over our porous borders. Stormy Daniels is what’s important.

No, it’s not. Looked at from further away than six inches it’s trivial compared to what’s going on in the world. Nothing could be more obvious.

Also, nothing could be more obvious than that Donald Trump is the most hated man in this country because he’s being successful as president. They want to bring him down personally because his policies, most of them anyway, are (gasp!) actually working.

All the legalities spewed by all the special counsels and talking heads calling for Trump’s head are trivial compared to that. This is not about the law or however you want to define high crimes and misdemeanors.

It’s about good, old human psychology and that most basic of emotions therein — envy.

No one — no one in his right mind anyway — ever voted for Donald Trump to be head priest or rabbi. But we live in an age of hypocrisy for which the word hypocrisy itself — what Rochefoucauld once called the homage that vice pays to virtue — is now so weak it’s almost as meaningless as racism or racist. We need to invent something new.

But that’s for the long term. For the short term, have no fear — the clean-up squad is here: Robert Mueller & Co. The Department of Justice and the Special Counsel’s office move ever closer to the KGB, or maybe Savonarola or Torquemada, while thinking they’re the next best thing to Mother Teresa.

So if there’s going to be impeachment, I say bring it on, Lefties. Destroy the country, if you wish. Create a civil war.