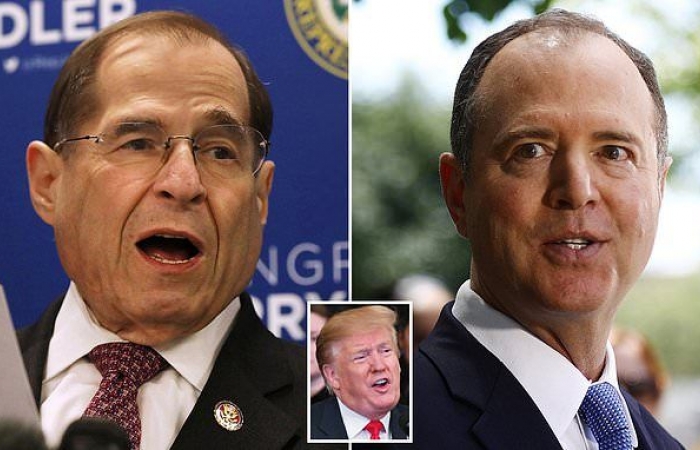 We all know the horrors of addiction—lives destroyed, families shattered. It wrecks the fabric of society. Unfortunately, the Democrats have contracted an extraordinarily virulent form—investigating Donald Trump has become crack cocaine to them with maybe fentanyl and methamphetamine thrown in.

The likes of Jerrold Nadler and Adam Schiff seem to be sucking on this pipe for dear life, day and night, giving them barely time to breathe or eat. Even when getting a rare touch of sleep, these putative public servants clearly have Trump on the brain. They never think of anything else—or, seemingly, do anything else.

And they are far from alone. Legions of Democrats and their media lackeys suffer from the same addiction.

A thousand Mueller reports, all unredacted with full access, everyone who ever met Donald Trump or even attended one of his rallies or ate one of his benighted steaks or drank a soy latte in the Tower Starbucks, testifying under oath in front of fifty congressional committees, many dozens of these witnesses going to jail for process crimes or having their careers ruined, forcing them to flee to Kathmandu to work as busboys in an ashram snack bar, would not cure those junkies. They’d still be dragging themselves through the streets at dawn, in Allen Ginsberg’s words, “looking for an angry fix” (i.e, something, anything, that might make Donald Trump look bad).

If you’re unclear what Democrats stand for in the 2020 election—other than wildly outdated socialism and some creepy anti-Semitism—this could be, indeed undoubtedly is, the reason. All they do is investigate.

In the interest of a two-party system, an intervention is definitely needed—followed by rehab.

For Mr. Schiff, that might entail a short journey from his L.A. district to one of those pricey movie star spas with Greek columns in Malibu. He’s unlikely to be bothered by the endless homeless encampments he passes en route since he’s been able to completely ignore them until now. As for Nadler, anything’s better than Penn Station after midnight.

As to the media and their Hollywood cronies, well, rehab’s expensive, as they well know. They may have to forego bribing their children’s way into Yale. But they’ll be better in the end.

Nevertheless, rehab is not just about group therapy in a hot tub. At some point you have to be honest about what brought you there in the first place, otherwise, no progress will be made.

So perhaps I can be of help with a little “tough love,” as the saying goes, by offering some hints about what really, deep down, is motivating their addiction that has, as always, at its basis, avoidance of depressing reality. I’m not promising this will lead to a cure, but nothing ventured…

A lot of them know this. The desperate clinging to “identity politics” is a manifestation of this conflicted situation. They don’t have anything else to hold onto. But besides the obvious—unemployment is at a record low for minorities— nothing is, well, more racist and shameful than appealing to people because of their race. It is against everything they once professed to be for.

So the party doesn’t know what it is, really. They are overwhelmed by Social Justice Warriors playing Victimhood Bingo. People who once fought for integration are now called upon to support segregated dorms at Harvard. Talk about cognitive disorder leading to personality disintegration. It’s enough to send a man to, well, rehab.

The facts are starting to reveal the investigation was instigated by (or was covering up) a conspiracy of proportions we don’t know yet, but could even be larger than our original worst suspicions—that it was a totalitarian attempt to block a president’s candidacy and then his presidency. There may even be more—and that’s truly scary.

Buckle up. We may all be headed for rehab soon. That would make it pretty crowded in those expensive Malibu spas. (Put me anywhere, Br’er Rabbit, but not in the same hot tub with Schiff.)

So there you have it. Some very screedy cheapjack analysis of what was motivating the Democrats internally, why they became addicted and now need rehab. There are probably more and better reasons and the likelihood, alas, of their checking themselves in are somewhere between slim and the proverbial none. Maybe a huge Trump landslide in 2020 would do it but… maybe it will make it even worse.