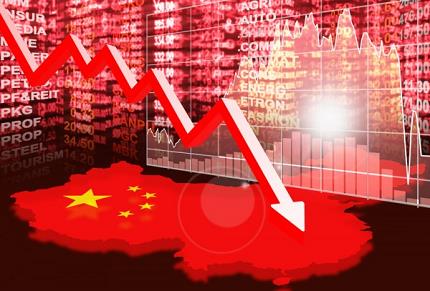 Omarosa. The show trial for Paul Manafort. These are the things CNN chipmunks chattered about endlessly the last few days. But CNN has no news judgment because it is run by a moron with a Harvard degree and a Napoleon Complex.

To find the news, I read the South China Morning Post, which is worried spitless that the Red Chinese economy will tank like its stock market has.

Its stocks overall have declined in value by 40% in the last three years. Our stocks are up 33% since we elected Trump. The SCMP thus is running a series of columns by panicked investors and experts.

Yao wrote, “China needs to put its house in order as the trade war goes from bad to worse.”

He pointed out, “In contrast with the progress seen in United States-European Union negotiations, there are no signs of trade talks resuming between the US and China since the breakdown of negotiations in June.”

There are 375 billion reasons this is bad for Red China. That is the number of dollars its profit was from exports to the United States last year.

Xu wrote, “China should cut its losses in the trade war by conceding defeat to Donald Trump.”

He spared not Chairman Xi’s regime:

“Beijing’s strategy of a tit-for-tat retaliation over tariffs has clearly failed. In fact, this strategy escalated the conflict. The direct retaliation after the US announced the first batch of 25 per cent tariffs on US$50 billion in Chinese goods (with the increase from US$34 billion just finalized and coming into effect on August 23) brought few benefits for China.

If anything, it gave the US an excuse to plan for a new batch of tariffs covering US$200 billion in Chinese goods. To be fair, it is possible that the US would have escalated the conflict even if China had not retaliated, but whatever the case may be, China’s strategy did not work.”

Here’s the problem, we buy roughly $500 billion of their stuff. They buy only $125 billion or so of our stuff. We have four times as much to tariff as they do.

Xu ended his piece, “To get out of this predicament, Beijing probably needs to deal with Trump directly, figure out what he needs to declare a win and create conditions for that. Of course, allowing Trump to declare victory might be tough and even embarrassing for Beijing, but sometimes it is the best choice to stop losses in one trade and hope to profit at another time.”

Reporters Wendy Wu and Kristin Huang wrote, “Did China think Donald Trump was bluffing on trade? How Beijing got it wrong.”

This happens when your intelligence consists of spying on Dianne Feinstein and watching CNN.

Howie wrote, “China has no idea how to play Trump, and it is doing what it always does when it smells trouble.”

“Beijing may be shocked by how things have played out for the moment, but they haven’t lost control of levers of power in the economy, nor are they going to stand by as pressure mounts. A coordinated monetary and fiscal policy can indeed avert short-term impacts, but China hasn’t even cleaned up the post-financial crisis stimulus and is now embarking on another as the outlook becomes ever more complicated,” Howie wrote.

“Yet again, China is facing a very delicate balancing act. In November, America will see midterm elections which could change the dynamic again, but the possibility of a second term for Trump should not be discounted. China will continue to be in Trump’s crosshairs. Pumping more money into an already bloated economy may have worked in the past, but the Chinese may find out that indeed this time really is different.”

It is brutal. The money men are not pleased with Chairman Xi. That may explain, in part, this last story from Bloomberg News.

“Asian stocks pared losses and Treasury yields ticked higher after China said its vice commerce minister will visit the U.S. for trade talks in late August. The dollar slipped along with the yen,” Bloomberg reported.

He will bring the white flag. How do you say “no mas” in Mandarin?

Oh, the press will play this as a big win for Red China. When was the last time the press got President Trump right?

Don Surber is author of “Trump The Establishment” and “Exceptional Americans: Fifty People You Need to Know.”