“TRUMP DOES WHAT HE SAYS” – AMERICAN MUSLIMS SUPPORT THE PRESIDENT 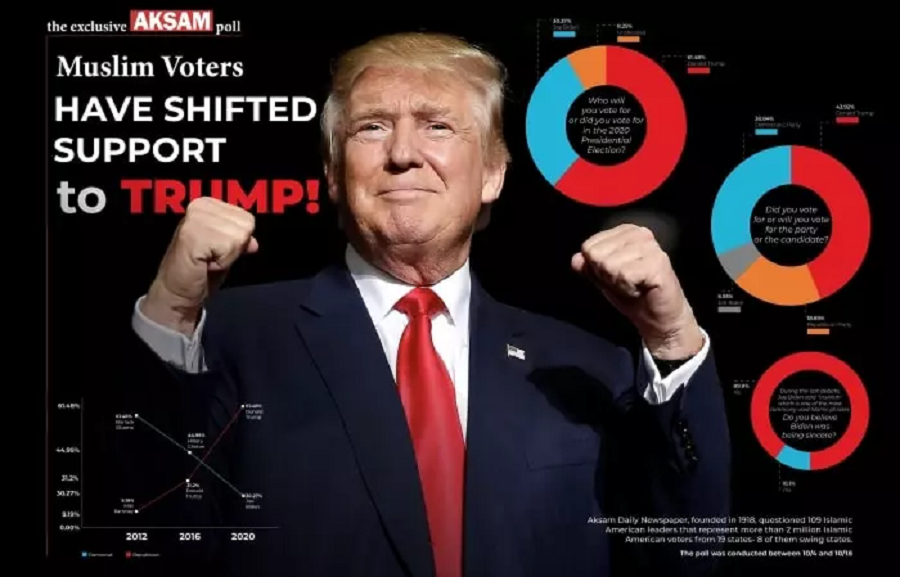 President Trump, whose Middle East plan is winning support from Arab nations, is gaining strong support from Muslim leaders and their followers in the United States who believe that the Democrats haven’t delivered on years of promises, according to a new survey of Islamic leaders.

In a shocking turnaround, 61.48% of the 109 Muslim leaders who “represent two million voters” plan to vote for Trump. That is a slight edge over their 2012 vote for Barack Obama.

The survey of the leaders was done by the Washington correspondent for Aksam Gazetesi (Evening Gazette), a Turkish daily newspaper. It found that the Muslim leaders’ support for former Vice President Joe Biden was 30.27%.

Those results represent a dramatic flip of the Muslim vote, which for years has sided with the Democrats.

Aksam’s Washington correspondent Yavuz Atalay shared his results in an interview and said, “It’s about the trustworthy. Obama, Clinton said good words, but they did not do what they said. Biden is doing same things. Good words but no action. Trump does what he says.”

For example, the poll asked the leaders for their reaction when Biden used the Arabic phrase for “God willing.” Just 10% thought Biden was sincere.

“According to 109 opinion leaders representing approximately 2 million Muslim voters in the states participating in the study, the new candidate Joe Biden could not break the distrust of the Muslim voters who had traditionally voted for Democrats. This distrust started with Hillary Clinton in the 2016 election, and in now strengthened with Biden. The voting majority of the Muslim electorate seems to be in favor of Republican President Donald Trump.”

The informal poll echoes one of several Middle East countries that showed support for Trump’s Middle East plan, including 79% of Saudi Arabia.

Here is the full article of the Aksam Gazetesi online edition in English, published October 20:

Aksam Daily Newspaper, founded in 1918, questioned 109 Islamic American leaders that represent more than 2 million Islamic American voters from 19 states- 8 of them swing states. Islamic Leaders say Joe Biden is not trustworthy. Most leaders will vote for Trump in the 2020 election.

The AKSAM Exclusive survey results were from the last 14 days. The poll was conducted between 10/4 and 10/18.

What do Muslim Americans really think about President Trump? 109 respondents from across 19 states participated in this poll.

The survey further found that:

Paul Bedard is one of Washington’s most respected independent journalists.