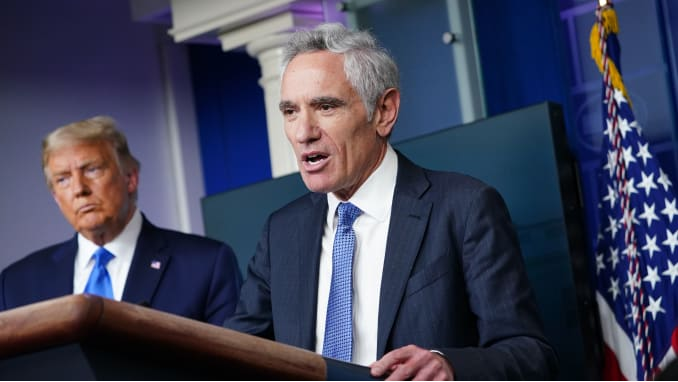 The uproar over the President’s COVID-19 diagnosis made one thing abundantly and terrifyingly clear: The media’s China Virus hysteria is here to stay— certainly through the election, and far beyond should Trump win.

On the other hand, should Biden win, the hysteria will disappear overnight.

Rather than accept that nearly all the early advice dispensed by self-proclaimed “experts” was not just wrong but resulted in devastating consequences that will impact the country for years to come, lots of Americans— thanks to the hysteria ginned up by the entire news industry and leaders of both political parties—are endorsing more punitive government decrees to  “stop” a virus that poses almost no serious health threat to the overwhelming majority of Americans.

People are fixated on masks; the President of the United States isn’t allowed to take a brief ride in an SUV with people trained to take a bullet on his behalf without enduring widespread media condemnation for “risking the lives of others” even though everyone wore a mask and other protective gear. Most of Monday night’s (10/05) town hall meeting with Joe Biden revolved around mask use.

Panic rules daily life at the same time we have fewer reasons to panic.

Recent data crunched by the Centers for Disease Control confirms that nearly everyone under the age of 70 who contracts the disease recovers; 95 percent of adults over 70 recover, too. Most sufferers report mild symptoms; overly-sensitive tests give false positives for people showing no symptoms at all. Hospitals are not overflowing with COVID patients and, with few exceptions, never were.

But the paranoia is so baked in that it seems unlikely the country will emerge from this constant state of fear anytime soon.

How can we regain our senses and return to normal life while accepting that this virus is not unlike other serious viruses that we’ve handled in the past without tanking the economy, surrendering to house arrest, or running around screaming about face coverings?

The President, thankfully, emerged from his brief convalescence with a new fighting spirit. “Don’t be afraid of Covid. Don’t let it dominate your life,” the President tweeted Monday morning when he announced he would be headed home from Walter Reed Medical Center. “We have developed, under the Trump Administration, some really great drugs & knowledge.”

In a video taped at the White House Monday evening, the President underscored his have-no-fear message. “I learned so much about coronavirus. And one thing that’s for certain, don’t let it dominate you. Don’t be afraid of it. You’re gonna beat it.”

It appears that Trump’s new COVID advisors are having an impact. In August, the President appointed Dr. Scott Atlas, a critic of lockdowns and our one-size-fits-all remedy to cure the virus.  Atlas, 65, is a much-needed antidote to the attention-hungry, flip-flopping Anthony Fauci, who refuses to exit the media’s adoring spotlight or entertain any opposing viewpoint.

I talked to Dr. Scott Atlas on Monday afternoon, shortly after the President announced he would be leaving the hospital and getting back to work, which prompted yet another round of convulsions from the cult of Trump haters who simply cannot get a grip on reality.

“The President isn’t going to hide from the public or the press,” Atlas told me. “He wants to go to work. He wants to see Americans and he wants to interact with others. He won’t hide in the basement or frozen in fear behind a mask.” (Atlas also has been advising Florida Governor Ron DeSantis, who lifted restrictions on bars and restaurants on September 25 in his pursuit to normalize his state’s economy.)

Contrary to Joe Biden’s frequent accusation that the President won’t “listen” to the scientists, Atlas said “that narrative could not be more wrong. There is a difference of opinion in the scientific community. There is no monopoly on knowledge.”

Atlas named several top scientists, including noted epidemiologists, who refute the efficacy and humanity of lockdowns, especially school closings. Dr. John Ioannidis, who like Atlas is associated with Stanford University, wrote a prescient article in March 2020 forewarning the “fiasco” of extended lockdowns.

(Ioannidis’ explanatory video that same month was removed from YouTube for violating the site’s terms of service, which meant the professor of medicine and epidemiology at one of the world’s premier universities dared to hold an opinion outside mainstream thinking at the time.)

Other experts such as Dr. Jay Bhattacharya, Dr. Martin Kulldorff, and Dr. Sunetra Gupta are partnering with Atlas to use science and logic in hopes of deprogramming a largely brainwashed public. The trio this week issued a statement, called the Great Barrington Declaration, aimed at promoting “focused protection” that would safeguard high-risk populations while encouraging life to return to normal as quickly as possible.

“As infectious disease epidemiologists and public health scientists we have grave concerns about the damaging physical and mental health impacts of the prevailing COVID-19 policies,” the declaration states. “Current lockdown policies are producing devastating effects on short and long-term public health.” Thousands of experts and members of the public have signed the petition so far.

The United States is the only country in the world, Atlas said, with this level of hysteria over reopening schools. “We are sacrificing our children. We are eliminating socialization and group activities. It’s harming low-income families most because the lockdown is the luxury of the rich.”

Atlas doesn’t argue with the initial response to the virus. The attempt to prevent hospital overcrowding and buy time to prepare the health system was “appropriate,” Atlas said. But the medical and scientific community knows much more about the virus now. “It isn’t March or April, it’s October. We can’t continue to just believe people we thought had the whole story at first.”

Those people—Atlas didn’t name names but I will—include Fauci, Dr. Deborah Birx, and Dr. Robert Redfield, the hapless head of the Centers for Disease Control. Fauci is taking shots at Atlas in the press, referring to him as an “outlier.”

Beltway insiders, on the other hand, are attempting to smear Atlas by distorting his view on herd immunity, a scientific concept that up until a few months ago was universally accepted as truth. Suddenly the term is presented in the media in scare quotes as if it’s the latest Republican-fueled conspiracy theory.

“Denying herd immunity is like denying gravity,” Atlas told me. “But there is no policy recommendation, none, that cites herd immunity as a strategy.”

Democrats have planned to leverage the twin crises of COVID-19 and the economic shutdowns to win in November. Biden’s message, not surprisingly, is all over the place, at once condemning the President for not doing enough to stop the spread then condemning the President for the economic and societal consequences of the lockdown that was intended to stop the spread.

Polls consistently show low approval ratings for the President on his handling of the disease; most respondents believe Biden would do a better job even though his plans do not differ from the President’s. Biden continues to flip-flop on a national mask mandate but has publicly said he would authorize another economic lockdown.

It’s increasingly likely the election will be a referendum on Coronavirus and its after-effects, which means Trump’s new tack is a risky, but necessary, one.

Someone needs to push back forcefully on this destructive course with reason, compassion, and yes, science. The President needs to explain that he will lead us back to the life we abruptly left behind in March.

“What we’ve seen is the arrogance of the elite in a highly charged political climate,” Atlas says. “Leaders have to make decisions that make sense that take into account the impact of their policies.”

“We need to save lives and get America back to work.”

Julie Kelly is the author of Disloyal Opposition: How the NeverTrump Right Tried―And Failed―To Take Down the President