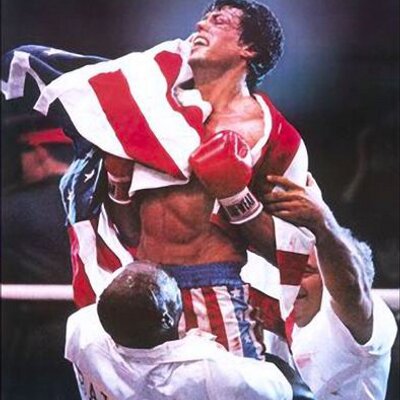 Most Millennials are too young to be intimately familiar with the Rocky films.  The original was released in 1976 and was a huge hit, making unknown actor Sylvester Stallone an instant superstar.

Rocky Balboa, a nobody fighter gets a chance at boxing stardom by fighting the world heavyweight champion, Apollo Creed.  The fight is a P.R. stunt.  Creed needs an appeal-to-the-people fight, “a novelty.”  He decides to give “a local underdog” fighter an opportunity.  “A snow-white underdog.  Very American!”

For Creed, it is really all about money.  Not so for Rocky… or for the throng of fans he picks up.

Donald Trump is the Rocky of our current political framework.  Once he announced, the late-night comics had a field day mocking the man and his candidacy.  Political elites assumed that the run was a publicity stunt.  Trump was hardly unknown in the financial and entertainment industries, but he was the last person anyone expected to run for president, let alone win.

One only has to watch election night coverage (The Circus, season 1, episode 26) to grasp the depth of shock and dismay among the media and political class.  They had believed their own weighted polls.

There is a scene in Rocky in which a newswoman is interviewing Rocky at a meat locker, where Rocky’s friend is employed and lets him train by hitting huge sides of beef.

Back at Apollo Creed’s fancy office, no one is paying attention to the television newscast except one of Creed’s trainers.  He alone sees something in Rocky – a talent and a determination no one else has yet observed.  No one listens to the trainer when he tells his boss, “This boy means business.”

That Rocky might beat Creed is unthinkable – as unthinkable as Trump becoming President of the U.S.  No one believed that Trump meant business, either, but he did.  And enough American people saw something in him that the media and the political class missed completely.

Creed is like Jeb Bush and his supporters – over-financed and overconfident.  Who among the Republican donor class thought anyone but Bush would be the candidate?  Bush spent $162 million to lose the primary early on.  How on Earth did the Republican establishment not know that the voters were done with the Bushes?

Hillary Clinton and her supporters were equally overconfident and dismissive of Trump’s chances.  She had ordered a half-a-million-dollar fireworks display to celebrate her victory.  How did the Democrat establishment not know that much of the country was done with the Clintons?

The boxing world has its own hierarchy: Apollo Creed at the top and Rocky at the very bottom.  Donald Trump had to contend with the rules of the political subculture that governs the media and the pols who inhabit the N.Y.-D.C. beltway.  Trump may have been at the pinnacle of the business world, but in their view, he was not remotely qualified to join the elite club of electoral politics.

Had Rocky taken out Creed in the first few rounds, the boxing world would likely have found a way to disqualify him.  The American Left has been trying to disqualify Trump since he won the election a year ago.

Leftists invented the collusion-with-Russia meme, which is going nowhere.  They’ve tried obstruction of justice for firing James Comey, who we now know was part of the group of FBI and DOJ operatives who set out to see that Hillary’s many crimes would be covered up and that Trump would not be inaugurated.

Since Trump’s Inauguration, they have worked tirelessly to impeach him.  Now they are trying the “mentally unfit” angle.  But this group’s house of cards is about to fall.  They are perhaps about to find themselves part of an entirely different subculture: persons charged with felonies or maybe even high crimes.

Before the iconic fight that serves as the climax of Rocky, Apollo Creed says, “American history proves that everybody’s got a chance to win.”

During the fight, Creed’s trainer says of Rocky, “He doesn’t know it’s a damn show; he thinks it’s a damn fight.”  When the fight is over, the announcer proclaims to the audience, “We’ve witnessed the greatest exhibition of boxing stamina in the history of the ring.”

Trump’s victory, the first by a man who had never run for political office before, was the greatest exhibition not only of his stamina, but of the American people’s victory over our corrupt political class.