TRUMP AND CONGRESS CHALLENGE THE PALESTINIANS TO GROW UP 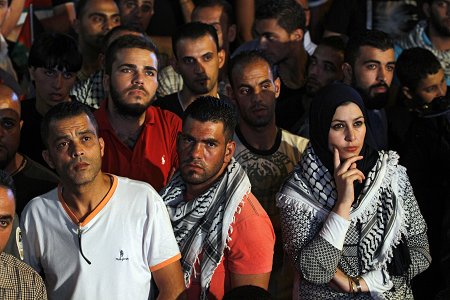 The ball is now in their court

The president’s decision to move the U.S. embassy in Israel from Tel Aviv to Jerusalem announced yesterday (12/06) is already sending the usual suspects into a tizzy.

The famous Arab Street, we are told, will be erupting.  The despicable fascist that runs Turkey has warned of imminent disaster.  And the president of France is doing what the French usually do vis-a-vis the Jews — well, not quite that bad.

But the real question is how the Palestinians themselves will react once the dust has settled.

Will they continue decades of self-destructive violent protests that have led many of us to believe they never had an interest in a two-state solution in the first place, that it was all posturing for handouts?

Or will they grow up and realize the time has come to negotiate to a conclusion and accept the responsibility of their own state and the adult compromises that would naturally entail?

By finally moving U.S. policy at least two degrees off years of unimaginative stagnation, Trump has forced the Palestinians  to face some measure of reality.  But he is not alone. They are also being challenged forcefully by Congress.  From the Algemeiner (12/05):

“The Taylor Force Act passed the US House of Representatives by unanimous consent on Tuesday (12/05), confronting the Palestinian Authority with the prospect of a massive cut in US aid for as long as it maintains its policy of paying monthly salaries and other benefits to the families of slain or convicted Palestinian terrorists.

Named in memory of Taylor Force – the former American army officer stabbed to death during a knifing spree by a Palestinian assailant in Tel Aviv in March 2016 – the legislation prevents the transfer of funds ‘that directly benefit the Palestinian Authority’ for a six-year period beginning in 2018 unless the PA verifiably ends its so-called ‘martyr payments’ policy.

The Taylor Force Act also requires the PA to repeal any laws enabling or favoring the payments policy, as well investigate terrorist acts for the purpose of ‘bringing the perpetrators to justice’.”

Though the embassy move may be more superficially dramatic in a part of the world rarely governed by logic, the congressional action might just be more persuasive to a Palestinian leadership that has been living off global largesse since the Oslo Accords of 1993.

There’s nothing like taking the money out of the hands of kleptocrats.

The U.S. is the PA’s biggest donor to the tune of approximately $700 million per annum, directly or via the UN. The PA, in its turn, paid out $355 million to terrorist — or, as they say, “martyr” — families in 2017.  At the very least, two branches of the American government seem to be working together for once.

Of course, their attempt  may produce nothing.  Those Hamas and PA billionaires may have enough stashed away to continue their sadistic games, seducing their own impoverished people with dreams of martyrdom over nothing, but for once the dial has been moved.

It will be interesting to see what happens.  The global chess game has changed.

Saudi Arabia, as we all know, is terrified of the Iranians and has found itself a covert ally of Israel against the mullahs.  The Palestinians are aware of that and not happy about it.  They are in a box.

Trump and Congress have chosen an auspicious time to make a move.  Various players will undoubtedly yell and scream in public and say something totally different in private.  That is the way of the Middle East.

The irony is that anyone who actually cares about the Palestinians as people should welcome what America is doing now.

It is perhaps the last best chance for the Palestinians to grow up, break free of their endless pattern of self destruction, and give up looking for excuses for another pointless intifada.

Unfortunately, too many of those players enjoy the status quo, profit from it, or resist change in general, like the self-righteous European leadership.

Nevertheless, progress.  And Trump has honored another campaign pledge.  He may be going for a record.