TO HILLARY FROM WHITE MARRIED WOMEN 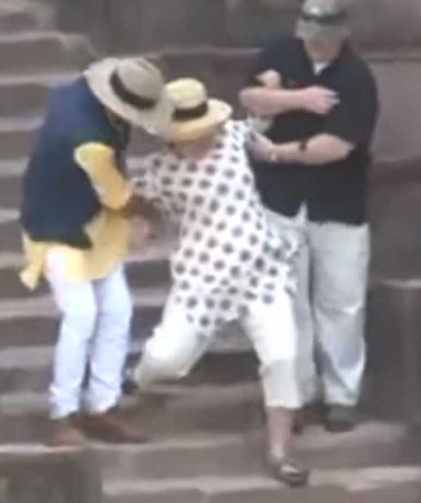 Hey, girl. Good to see you up and about these days. I hear India is lovely this time of year. Watch those steps!

So, listen—we need to talk. I think it’s time you heard directly from some white, married women about why we didn’t vote for you.

You can trust me. Like you, I grew up in the Chicago suburbs. Like you, I was raised in a home where dad was a Republican businessman and mom was a homemaker. Like you, I was smitten with politics early on: You fell for Barry Goldwater, I fell for Ronald Reagan.

But unlike you, I stayed in Illinois, attended a public college downstate (gross, right?) and settled down in the suburbs. You went on to the Ivy League, married Bill, settled down in some swanky public housing for a few decades and, well, we know the rest of the story.

That wasn’t the way it was supposed to be. It’s one thing for a woman candidate to lose female voters to her male opponent. But you lost those votes to Donald Frickin’ Trump. That’s a special kind of hurt.

Since the election, you’ve suggested we heeded the advice of our husbands, our bosses, the mailman, any sweet-talking guy—to vote against you. Michelle Obama said essentially the same thing.

I admit, I occasionally take advice from my husband. (I once let him choose the fabric for some upholstered chairs in our living room – big mistake.) Husbands can sometimes lead us astray, like telling us they will only play 18 holes, or promising that a rumored affair with a young girl is just a right-wing conspiracy. Stuff like that.

During an event in India the other day (ka-ching!), you ripped us again. After explaining that Democrats generally don’t do well with white men or with married women, you said this: “Part of this is an identification with the Republican Party, and a sort of ongoing pressure to vote the way your husband, your boss, your son, whoever, believes you should.”

As if that wasn’t bad enough, you then claimed that Jim Comey (!) influenced our vote: “I was on the way to winning white women until former director of the FBI Jim Comey dropped that very ill-advised letter on October the 28th, and my numbers just went down. All of a sudden, women who were going to vote for me, and frankly standing up to the men in their lives and the men in their workplaces [emphasis added] were being told, ‘you can’t vote for her. She’s going to jail.’ So it stopped my momentum and it decreased my vote.”

I asked several friends, all married ladies, to respond to your comments. This is by no means a scientific poll, but maybe it will give you some insight as to why you lost our vote. And it might sting:

“She’s phony, not genuine, cares only for herself, corrupt to the core. I just hope she keeps talking . . . this kind of comment is what got Trump elected.”

“I did not vote for her because she is a crook and a liar and will do any means to pursue her own agenda.”

“I didn’t vote for Hillary because she’s a hypocrite who used her husband’s political career to advance her own—a true irony of her brand of feminism.”

“I didn¹t vote for Hillary because I thought she was corrupt and couldn’t be trusted.”

“I did not vote for Hillary Clinton because I think she is a crook. I wanted an outsider to stir things up and I am so glad I voted for Trump.”

“The video of her dressed like a pilgrim supporting her cheating husband and blaming the right wing conspiracy will haunt me forever.  She is that woman who voted the way her husband told her.”

My friends are funny.  Everyone said the Comey letter had no influence on their vote. And then here’s the kill shot from one woman:

“I tell my husband how to vote, you condescending hag.”

You might be right that one man did impact the election. Based on the exit polls, there’s a guy who seemed to have influenced a lot of votes: Barack Obama.

Two-thirds of respondents said the condition of the national economy was “poor” and that the direction of the country was on the wrong track. The former president scored low marks on fighting ISIS and Obamacare.

Sorry, Hillary: No one was in the mood for a third Obama term.

I’m not really sure where we go from here. After insulting huge segments of the electorate, including folks who live in so-called red areas of the country that aren’t “optimistic, diverse, dynamic, moving forward” like all those happy people who live in the inner cities, I’m not sure you can run for national office again.

So, from one suburban girl to another, here’s my advice: Let it go. We aren’t Stepford Wives, or even women who would stay with a cheating, lying rascal to protect our power and advance our careers. It wasn’t easy for some of us to vote for Trump, but you made it much easier.

And if it makes you feel any better, my husband voted for you.