TIME TO LOCKDOWN THE LOCKDOWNS 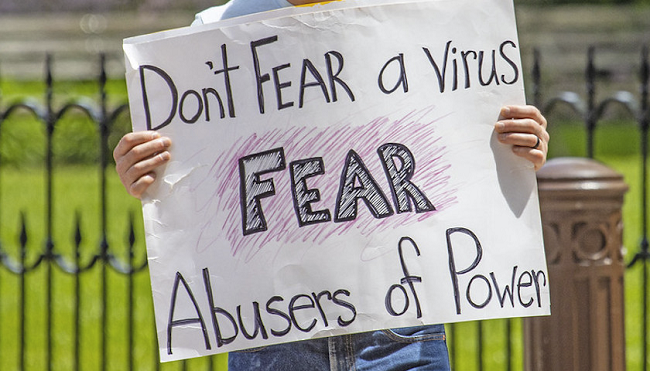 Take off the masks and remove the “social distancing” circles from the floors. Open the schools, liberate college campuses, fill the restaurants and the gyms and the churches and the salons. Enough.

If 2020 wasn’t twisted enough, the current political imbroglio centers around a verboten visit to a California boutique for a routine blow-out.

Americans are lining up either behind House Speaker Nancy Pelosi, who claims she was “set up” to visit the San Francisco salon, or the salon’s owner, a woman struggling to keep her business alive amid cruel and unscientific edicts issued by her governor months ago.

The incident is the latest in a series of “rules for thee but not for me” gut punches from the ruling class; whether it’s mask-free trips to the park or crowded funerals for anointed heroes or casual meals munched indoors, the government-ordered shutdowns apply to everyone except the sadists running government who order said shutdowns.

But here’s the rub: No one should be talking about Pelosi’s coif controversy because it should not even be a story. It shouldn’t have happened in the first place.

Erica Kious should never have been forced to close her business, fire her stylists, and sneak in customers like some 1940s underground operation hiding from the nation’s modern-day face covering and social distancing Gestapo. Pelosi should be able to get her hair done whenever and wherever she pleases without concocting a preposterous excuse that she was framed for fluffy follicles.

In mid-March, Americans were asked to suspend their personal freedoms, business pursuits, and schooling for 15 days to “flatten the curve” of rising cases of the novel coronavirus. Americans, fearful of the unknown and willing to do what they imagined was the right thing to protect themselves and their family, acquiesced.

That was 175 days ago. What has happened since will be studied and debated for decades with one likely conclusion: Global lockdowns, particularly in the United States, were one of the costliest man-made disasters of all time.

The decision was rooted in unscientific hocus pocus that resulted in economic, educational, mental, physical, and emotional catastrophes on a scale that can never be fully quantified—not to mention the way stay-at-home orders fueled racial and civil unrest across America months before a national election.

A very small handful of us recognized this horrific mistake at the onset; we were shunned by both the Left and Right as heartless grandma-killers and “armchair epidemiologists” with no place in the debate. It was clear from the start, however, that the “experts” were winging it.

The data was totally unreliable; the suggestion a virus could be stopped defied science and common sense. Initial models, based on untested inputs promoted by hucksters with an agenda, were prima facie garbage.

“This is a dangerous time and not just because of the threat of a treatable disease,” I wrote in TTP Fraudulent Models – Fatal Consequences.

“Americans are willingly surrendering to government their freedom, their livelihoods, their long-term economic security, and their mental well-being over unjustified panic about a virus that might have already spread and now is abating. If this is the new normal, where incomplete data and media-fueled panic rule the day, that is an even more frightening prospect than what’s happening right now.”

Now, months later, the oppression of the “new normal” is baked into daily life.

Kindergartners cry at computer screens instead of navigating those first wobbly days away from mommy, a rite of passage critical to human development. Remote learning strains the mental faculties and physical tolerance of teenagers now forced to stare for hours at virtual classrooms with no engagement or socialization. High school athletes who have suited up for football and soccer and cheerleading and cross country every season since grade school are sidelined; lifelong dreams of college scholarships, gone.

Millions of nursing home residents in some states remain neglected from the life-sustaining touch of a son or daughter. Florida Governor Ron DeSantis broke down during an emotional press conference September 1 when he announced the reopening of nursing homes to visitors.

Loved ones would just “like to say goodbye or to hug somebody,” the first-term Republican explained. After composing himself, DeSantis wondered aloud whether the decision to shutter the elderly was the right one. “I think it’s difficult to think that some of our action may have . . . prevented that.”

Every age group is tortured by the inhumanity of quarantine. College dormitories, a place where new adults get the first glorious taste of grown-up liberation, resemble solitary confinement units. At a time when Democratic mayors are releasing criminals from prison, simpatico university deans are criminalizing young people for . . . acting like young people. Students were at first promised a few in-person classes and some semblance of a regular campus atmosphere—until tuition was paid.

Those of us parenting college students already know about the punishing rules and penalties imposed on our children; those who don’t should take a moment and read this collection of campus horror stories gathered by journalist Jordan Schachtel.

The accounts are heartbreaking and infuriating.

“My son is a Freshman,” one parent wrote. “All his classes are online. In his giant dormitory, his room is only one with three guys. They have knocked on doors in their hall trying to meet people, and have been chastised and hassled by the RAs for being ‘radicals’ for simply reaching out to others.”

We now live in a “Black Mirror” dystopia—as evidence proves how nonthreatening this disease is to the overwhelming majority of Americans, threats to comply with punitive commands from above escalate.

Remedies like HCQ are dismissed or demonized while moneyed interests plug forced vaccinations so we can “get back to normal.” Other serious health issues go ignored or untreated as we fixate on a virus that already has burned out in most parts of the country.

Students and teachers are back to school in Wuhan, the source of the plague, while our kids prepare to remain secluded and chained to laptops for the rest of the calendar year.

This must end. At a Pennsylvania rally Thursday night (9/03), President Trump detailed the negative outcomes of the shutdown. He reminded Americans that he once warned the cure couldn’t be worse than the disease and warned prolonged lockdowns in Democrat states are politically motivated.

The President is right—he should now declare the “war on coronavirus” is over. Yes, there are battle scars but the country won. Now, the reconstruction must begin.

Take off the masks and remove the “social distancing” circles from the floors. Open the schools, liberate college campuses, fill the restaurants and the gyms and the churches and the hair salons.

Julie Kelly is author of Disloyal Opposition: How the NeverTrump Right Tried―And Failed―To Take Down the President.