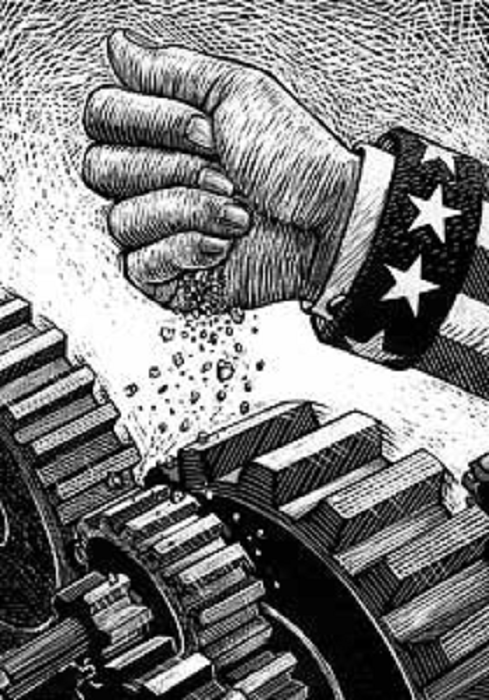 A new conservative opposition research group is using unorthodox, and controversial, tactics to throw what it describes as “a big handful of sand” in the gears of the Biden administration — tactics it claims have been used effectively by the left for years.

In an interview with Tom Jones, founder of the American Accountability Foundation (AAF), he explained:

“I see our group right now as getting up every morning and with the goal of making it as difficult as possible for the Biden administration and their allies on the Hill to implement their agenda. Our goal is to take a big handful of sand and throw it in the gears of the Biden administration, and that’s what we’re going to do every day.”

Jones – who has worked in a number of research groups, as well as a legislative director for Sen. Ron Johnson, R-Wis., and for the 2016 Ted Cruz presidential campaign – said the AAF differs from other opposition groups by not being client-based, and instead is focused on causing trouble for the new administration.

It was set up only in March but has already made headlines, in part due to its guerilla-style tactics. Notably, its members infiltrated a Zoom training for congressional staffers on earmarks — and leaked video showing aides telling trainees that while “the optics” of a lawmaker steering an earmark to a campaign donor “look kind of bad,” the project could still be allowed under House rules.

“I think the optics are bad but the rules of the House would be sufficed because there is no immediate family interest,” an Appropriations Committee staffer said on the video, reported by The Hill.

A spokesperson for the committee told the Hill the AAF’s tactics were “hypocritical in the extreme” for using fake identities and “surreptitiously” recording meetings while talking about ethics.

“However, what these right-wing hacks heard is what the Appropriations Committee has been talking about for months: our strong accountability and transparency rules that have won praise from experts across the political spectrum,” the spokesperson said.

How’s that for your laugh of the day?

Meanwhile, the group recently provided transcripts to Fox News which revealed that President Biden’s nominee to lead the Department of Justice’s (DOJ) Civil Rights Division organized a conference that was used as a tool by radical anti-government activists to champion cop-killers and free violent criminals.

The conference organized left-leaning students and anti-government activists in their shared support of freeing death row inmates, whom they referred to as “political prisoners.” The list included people convicted for a wide array of crimes, including convicted cop-killers Mumia Abu-Jamal, Mutulu Shakur, Sundiata Acoli and Tom Manning, in addition to other radical extremists.

“I’m never doing anything illegal but just because it’s impolite to log into an earmark training seminar and offend the morals of Capitol Hill staff, that’s not going to stop me from doing it.

If I’ve got to trail someone on the ground to find out what they’re doing, I’m totally going to do it, because people who are making decisions need to have this information, they need to understand who they are trusting with the reins of government and sometimes that means we will use unorthodox methods to get the information we need.”

But Jones said that the group is seeking to catch the conservative movement up with tactics used by major left-wing opposition research groups for years, and tactics that made life difficult for the Trump administration — particularly in its focus on Trump nominees for key positions.

“The left is very very well organized on this, very well resourced and has been effective for a number of years,” he said. “They were very effective making life difficult for Trump nominees, and they’ve taken that infrastructure and transferred it into bolstering their nominees, but yeah we’ve certainly learned from them and seen their effort was effective from a professional sense — terrible for the country, but as a practical matter, professionally they do their job well.”

He said the AAF has been focusing on Biden appointees who are just below Cabinet position, something he said that has been neglected by more traditional conservative organizations.

“That second tier are really the folks who are going to do the day-to-day work implementing the agenda,” he explained. “It’s obviously severely problematic if there’s a radical leftist running an agency, but it’s also really problematic if their deputy has worked on leftist issues in the past, has deep roots within the progressive movement and is going to implement an agenda out of touch with what the American people care about.”

It’s an area where Republicans have had difficulty making headway, with so far only a few nominees causing headaches for Biden’s administration. The new group now has its eye on nominees like Chiquita Brooks-LaSure, Biden’s pick to lead Centers for Medicare and Medicaid Services, who advocates free government health care for all illegal aliens.

In terms of an ideology, Jones said the AAF differs from traditional opposition research groups as its client is the conservative movement, rather than an individual client who pays for such groups to go after a target.

“We’re kind of starting with, ‘Let’s see what we can do from day one to frustrate the Biden administration agenda’ and work from there,” he said.

“Personnel is Policy. We’re working to ensure that leaders within the federal government reflect the values and concerns of the American people, not the liberal coastal elites and their woke allies in corporate America.”

Adam Shaw is a correspondent on US and European Affairs for Fax News.